The American experiment has failed in Afghanistan

After 16 years, we've only made the country's political situation worse 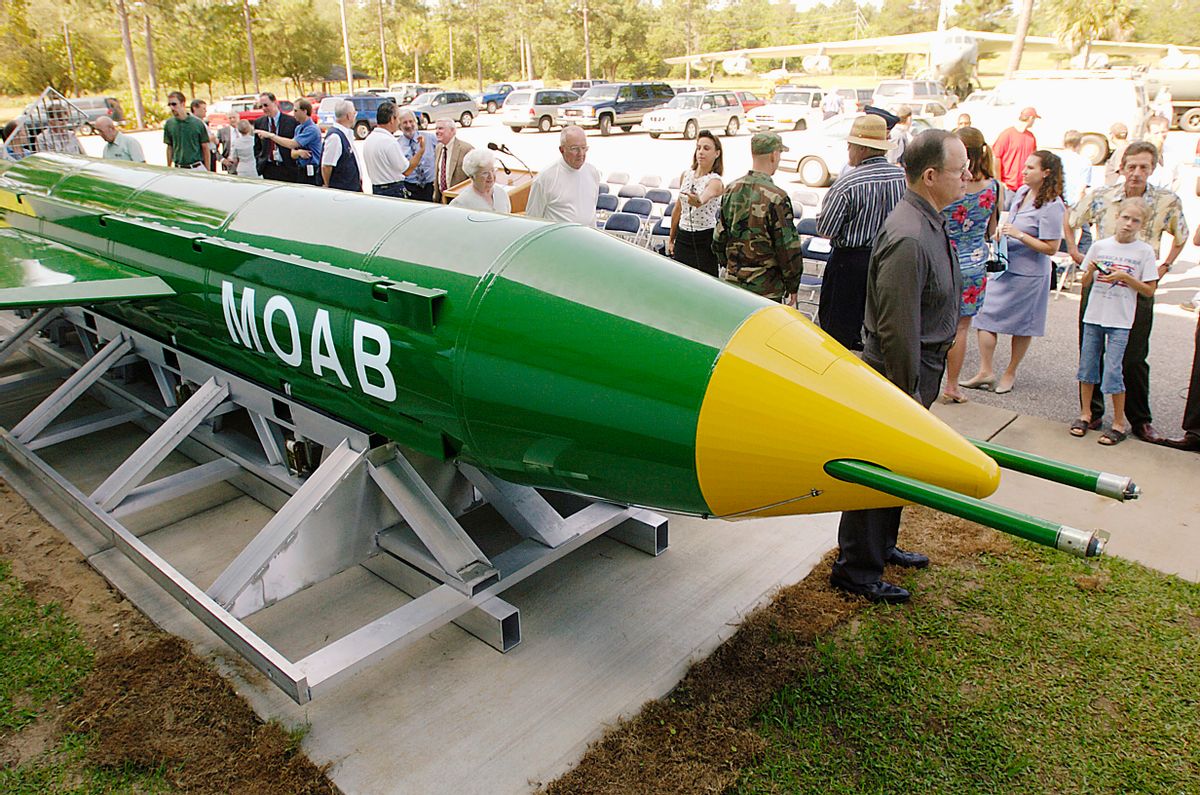 In this May 2004 photo, a group gathers around a GBU-43B, or massive ordnance air blast (MOAB) weapon, on display at the Air Force Armament Museum on Eglin Air Force Base near Valparaiso, Fla. U.S. forces in Afghanistan struck an Islamic State tunnel complex in eastern Afghanistan on Thursday, April 13, 2017, with a GBU-43B, the largest non-nuclear weapon ever used in combat by the U.S. military, Pentagon officials said. (Mark Kulaw/Northwest Florida Daily News via AP) (AP)
--

Last summer, President Donald Trump’s Secretary of Defense James Mattis told the Senate’s Armed Service Committee, ‘We are not winning in Afghanistan right now.’ The US has been at war in Afghanistan since October 7, 2001. This long war, over 16 years old, has indeed not gone the way that the United States government assumed.

When the US began its ferocious bombardment in 2001, the forces of al-Qaeda hastily left Afghanistan for the homelands of its members. They have since taken their ambitions to al-Qaeda’s regional franchises (across North Africa, in Yemen and Syria, around Central Asia and deep into Pakistan). The death of Osama Bin Laden made little impact on al-Qaeda, which had not relied upon him towards the end of his life. Even Bin Laden’s deputy, Ayman al-Zawahiri, is no longer significant. The hierarchy of al-Qaeda has been surpassed by regional leaders such as Abu Mossab Abdelwadoud (in the Maghreb) and Khalid al-Habib (in Afghanistan).

Men like Abdelwadoud and al-Habib have said in different ways that they sense that they are appearing more moderate as ISIS seeks to outflank them with its brutal techniques. ISIS in Afghanistan, like ISIS elsewhere, is chiseled out of the harshest anti-Shia sectarianism. The ISIS attack on a Shia mosque in Kabul on August 25 killed 35 civilians. One of the 65 injured remembers the scene well. ‘My mother, my niece and I were on the second floor of the mosque. We had just finished laying out our prayer mats when we heard gunshots.’ At this point, chaos ensued. This woman’s mother and niece were shot. ‘No one came to our aid and a big explosion took place. I was injured with a lot of broken glass in my chest and face.’ Her mother died. This anti-Shia violence is now compelling Iran to find a way to undercut ISIS. Even support of the Taliban would not be out of bounds.

In 2001, the Americans did not easily vanquish the Taliban. It now controls more than half of Afghanistan’s landmass, and continues to threaten major cities. The Taliban surrounds Kunduz, which it has attempted to take thrice. Last week, the Taliban attacked a police checkpoint in the Kunjak area of Imam Sahib district in Kunduz. These are encounters to test the capacity of the Afghan state’s defenses. The Taliban is eager to seize Kunduz. It would be a blow to the claims made by the government in Kabul and by the Americans.

Trump sent more US troops to Afghanistan and allowed the CIA to more freely use its lethal drones. There are now about 14,000 US troops in Afghanistan and the number of airstrikes in the country has increased dramatically. But there is no clear political path for the soldiers. What can they do in Afghanistan? US armed action in Afghanistan has not by itself been able to defeat the Taliban. What the armed action has produced is a large number of civilian casualties. A new report by the UN Assistance Mission in Afghanistan and the United Nations Human Rights office shows that 10,453 civilians died in various atrocious acts. These include suicide attacks by the Taliban and ISIS as well as airstrikes by the United States and the Afghan air force. These latter, which are rarely reported, are responsible for at least 295 deaths.

Take two examples. On August 10, US forces claim that they saw weapons being loaded onto a truck in Nangarhar Province, where ISIS has been active. US warplanes tracked the truck and fired onto it, killing 10 of the 11 people on the truck. They were all civilians. Twenty days later, south of Kabul in Pol-e-Alam (Logar province), a Taliban fighter with a rocket launcher was near a house. The residents in the area told him to move away, fearing for the lives of their families in the home. He began to move away, but it was too late. US warplanes fired on them.

‘We heard an explosion,’ says a member of the family, ‘followed by heavy gunfire at the house. My family all sought shelter inside. After a few moments, a bomb was dropped on the house. Thirty-one people were in the house at the time. This was too much for just one Taliban.’ He is right. There are other ways to fight a war than to use bombs recklessly on the homes of civilians. Thirteen people died, of whom 10 were children and three were women.

What does a survivor of such a strike do? Would they not be pushed to the Taliban or worse to ISIS? There are few choices in this hard-hit land.

Confidence in the Afghan State

There has been, this year, a dramatic 17% increase in suicide attacks and other such attacks. This is part of the attempt by both the Taliban and ISIS to break whatever confidence remains in Afghan society for the US-backed state. In fact, the various attacks inside Kabul — including the horrid attack on May 31 of last year, which killed 92 civilians and injured 491 — have increased disenchantment with the government of Ashraf Ghani. Even his closest allies find him to be hapless, lost in a haze of World Bank verbiage and increasingly reliant upon his American handlers. It is this breaking of confidence in the Afghan government that suggests the defeat of the American project.

Thus far, since 2001, the United States has spent over $75 billion to build the Afghan military. This money seems to have bought very little. Late last week, the Taliban struck an Afghan National Army base in the western Farah province. The Taliban took casualties, but they killed at least 25 soldiers and seized a cache of weapons (as well as a Humvee and a truck). That same day the Taliban attacked the National Directorate of Security in Lashkargah in Helmand Province and an Afghan Army base in Nad Ali, about 20 kilometers away. These attacks came in the belt that runs along Afghanistan’s southern lands. It is the area where the Taliban operates with the greatest confidence.

Rumors now come from diplomats in Afghanistan that the politics of Afghanistan has become decidedly more complex. Sensing that the government in Kabul will fall, the Iranians and the Russians are worried about chaos on their borders and about the spread of extremism into their lands. The Russians and the Iranians seem to have opened negotiations with the Taliban just as the Americans have decided no longer to negotiate with the Taliban (through the intermediary of Qatar). Russia has also increased its links with Pakistan, who is miffed by Trump’s negative sounds about Pakistan’s role in Afghanistan. How any of this will turn out is anyone’s guess.

The American project has decidedly failed in Afghanistan. Others are now edging their way into the country, pushing and prodding to see which way matters will turn.

Meanwhile, pay some heed to the Afghan people. For them, choices are few; grief is a way of life.