"Homeland" is warning us: The domestic right-wing terror threat is real 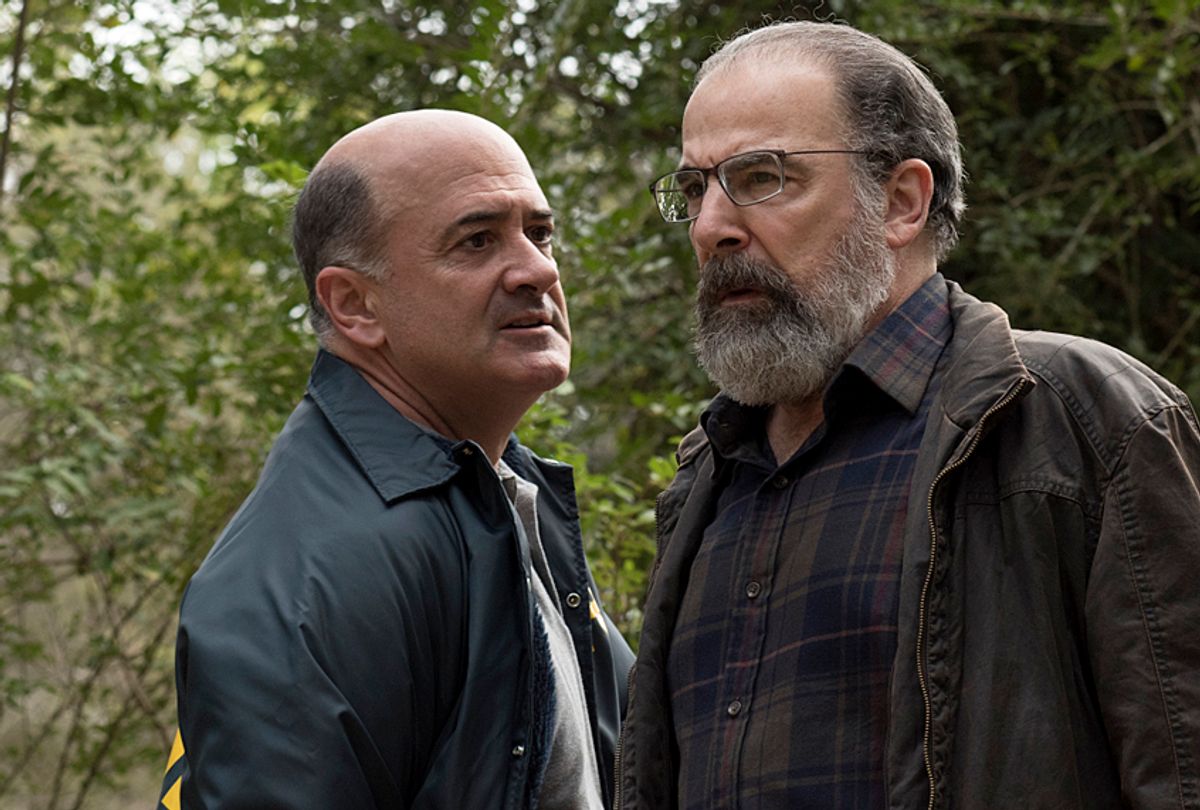 Beliefs have consequences. If I believe that I can expect heavenly reward if I martyr myself in the murder of infidels, I’m likelier to fly an airplane into a building. If I suffer from the psychotic delusion that I am a bird, I am likelier to jump off a building. One of the reasons that the policies of democratic socialism have failed to rally a majority of Americans is due to the belief – the fantasy – of the “American dream.” As John Steinbeck said, “The poor do not see themselves as an exploited proletariat, but as temporarily embarrassed millionaires.”

"Homeland," the award-winning Showtime drama about United States politics and counterterrorism, is possibly the only thing highly visible in American culture dealing with reality, and the severe threat that increasingly paranoid and hostile right wing ideologies pose to the domestic peace and polity.

In the current season, Carrie, who is played by Claire Danes with characteristic intensity, and the FBI and NSA are not combating any foreign Islamic terrorist networks but the escalating violence of an internal, right wing resistance against the federal government. The President of the United States has encouraged hysteria by violating the civil liberties of many military and government personnel after finding credible evidence that an assassination plot against her was an “inside job.”

The agitated anti-government militia members and Tea Party-like activists seek the guidance and insight of their oracle, Brett O’Keefe, a conspiracy theorist radio talk show host who regularly fabricates charges, lies to present his case against the “elites,” and due to the flawless performance of Jake Weber, is a dead ringer for Alex Jones.

O’Keefe is a fugitive from the law, because the federal government has reason to believe he had prior knowledge of the plot to assassinate the president. He has found safe harbor with a family in rural Virginia willing to hide him in their basement in a show of loyalty to the cause of “liberty versus tyranny.”

Homeland’s most recent episode exploded in violence with a Ruby Ridge-style shootout between federal agents and the militia guarding the compound with O’Keefe. In his last broadcast before surrendering, the host committed an act of sedition by encouraging aggressive and unlawful dissent against the “enemies of freedom” in “big government.”

The fiction of "Homeland" aligns with a dark history of anti-government extremism in the United States rapidly moving toward the burning point.

Liberals appear helpless in their naiveté when they prepare champagne bottles and streamers at the prospect of Donald Trump’s removal from office. It is obvious that not only the country, but the entire world, would benefit from a premature end to the monstrosity that is the Trump presidency, but it is doubtful that any indictment or impeachment would transpire without bloodshed.

Throughout the two terms of the Obama administration, membership increased exponentially in militias, white supremacist organizations and anti-government extremist groups. The rhetoric of the right wing, simultaneously, has become disagreeable with any notion of compromise or cooperation with civil society. Add these elements to a general public so uneducated that their ignorance presents — in the words of Condoleezza Rice, certainly not radical — a “national security threat" and foreign governments eager to create social discord through the proliferation of fake news, and the chemistry of American culture becomes combustible.

It is easy to mock a band of weirdos playing GI Joe in the wilderness, but as all of our mothers warned us, “It is all fun and games until someone gets hurt.”

Timothy McVeigh murdered 168 people, including 19 children, in the deadliest act of domestic terrorism in American history — the bombing of the Alfred P. Murrah Federal building in Oklahoma City.

Most of the rhetoric he employed to justify his destruction of innocent life is now interchangeable with the lead talking points of the Trump administration and the most popular right wing commentators. Republican politics is no longer the property of decent conservatives but the identification card that a bizarre bevy of white nationalists, firearm fetishists and radical anarchists of various so called “Patriot” groups can use to gain entry into the American mainstream.

“I believe we are turning into a socialist government,” McVeigh said. “The government is continually getting more powerful, and people need to defend themselves against government control.”

McVeigh also feared that President Bill Clinton’s gun control measures in the Brady Bill would eventually lead to the revocation of the 2nd Amendment and the governmental confiscation of home defense handguns and hunting rifles.

Like many leaders of the contemporary right wing, McVeigh was not only an advocate of low federal tax rates but an adherent to the absolutist belief that taxes are theft and that the revenue that the federal government gains from taxation enables it to wage war against the citizenry.

The Oklahoma City bombing, according to McVeigh’s poisonous and illogical ideology, was a just attack on a tyrannical force of evil. The victims without government affiliation, including the 15 boys and girls in the building’s daycare center, were regrettable, but unavoidable “collateral damage.”

When McVeigh attempted to recruit a young man to his “movement,” he explained — correctly — that a person with nothing to lose is dangerous. Responsible Americans need to begin to take measure of the danger forming in pockets of America where many enraged men, who share the convictions of McVeigh, Jones and Trump, are unemployed, unmarried and unhopeful.

In 2009, the Department of Homeland Security reported on the “resurgence in right wing extremist recruitment and radicalization activity,” warning law enforcement agencies to take specific action in order to mitigate the threat. Due to snowflake political correctness, Republican senators quickly moved to ridicule the report, and with cooperation from conservative media, largely succeeded in banishing it from political discussion. The DHS event went so far as to “dissolve the team” of the analyst responsible for the document. The cowardly move to mute any conversation about right wing violence is particularly irresponsible, considering that since 2002 right wing militants have killed more people in the United States than jihadists.

McVeigh was convinced, and no amount of evidence could persuade him otherwise, that the dangerous elites of the federal government were conspiring to destroy America. Millions of armed Americans share his belief but feel that they have a billionaire acting as their guardian at the highest level of American power.

When that man leaves the White House, especially if his exit is involuntary, the real threat might emerge. What will the “patriots” who are convinced that every institution of American society is conspiring against them do when their savior and protector is no longer in power? Two-thirds of Trump voters in the general election told pollsters that the 2016 race was “America’s last chance” for survival. If Trump is not in position to keep America on life support because the elites have usurped his authority and violated the will of the people, how will the militias, oath keepers and NRA radicals stop whatever elitist succeeds him from pulling the plug?

Trump, and his supporters, flatter themselves with the term “populist.” They can have it. Populism is neutral, capable of denoting political activism that is either beneficial or harmful. There exists right wing populism and left wing populism. It is not an entirely instructive description.

The populist movement of the late 19th century had its dark side, but it also persisted to press for the direct election of senators, an eight-hour work day and a progressive income tax. Populism with Trump at the switch has no clear agenda; only the delusion that it alone can save America from the destructive scheme of the dangerous, “globalist” elite. Trump’s electoral victory was the new populist movement’s means of imposing its incoherent will on the country through peaceful, political means.

After years of Donald Trump continuing to throw meat on the raging fire — accusing former President Obama of tapping his phone, calling members of the mainstream media “enemies of the people,” expressing hatred of multiculturalism and globalism — how will the populist mob react to sudden feelings of displacement or suspicions of disenfranchisement? In the words of one of America’s great novelists, James Lee Burke, “no mob ever formed to do something good.”