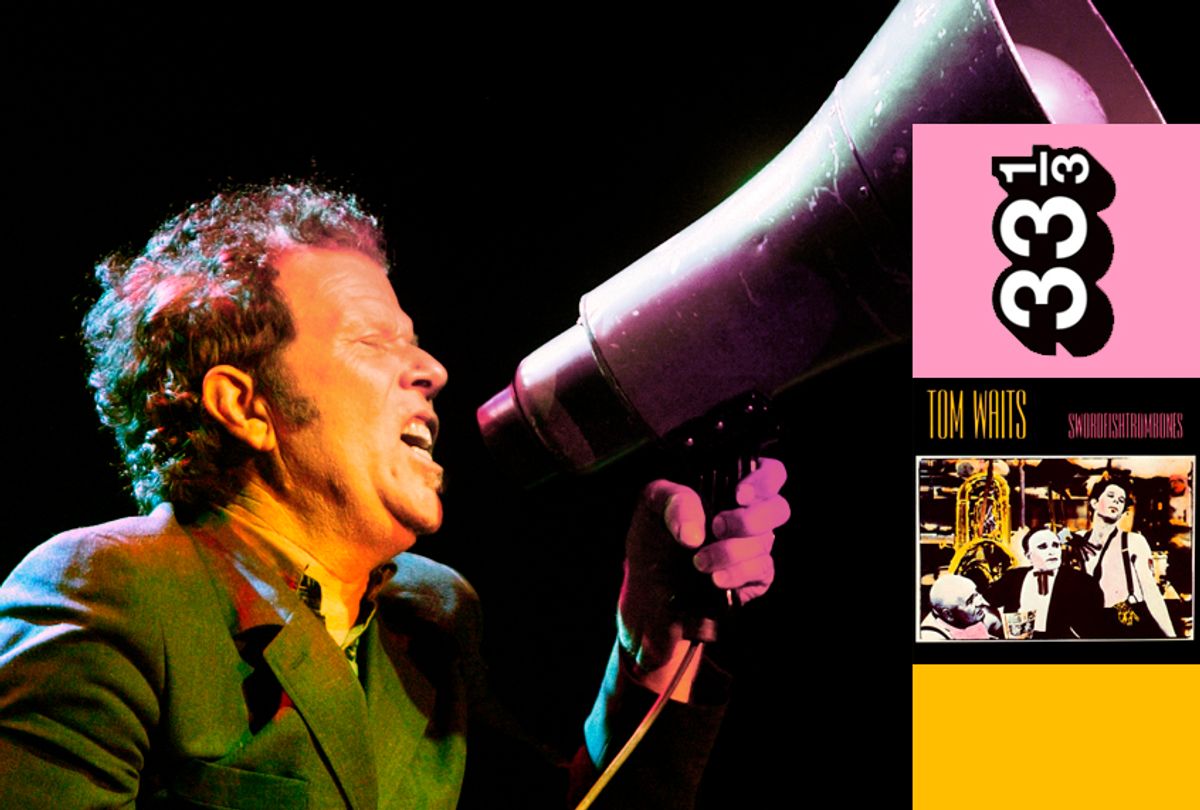 In an otherwise favorable review, Robert Christgau accused Tom’s post-"Swordfishtrombones" songwriting of an overrated “American grotesquerie.” This charge is easily refuted since Tom’s freak show has an international flair as often as it features two-headed snakes bobbing in a murky jar in a Kansas sideshow. Despite [his wife] Kathleen’s complaint that he compulsively subtracts body parts from his characters, Tom doesn’t exploit the grotesque so much as inhabit it.

Anybody who’s had to endure a creative writing class knows the tedium of workshopping somebody’s exercise in Southern Gothic Lite. Without something like Flannery O’Connor’s mordant wit or moral clarity, trotting out a parade of dwarves, cripples and the occasional holy idiot just substitutes easy color and sensation for plot and character.

I’m going to take a bold critical stance here and argue that fiction and songs are discrete cultural expressions with distinct formal elements. (Though it is a common enough mistake, which can be disastrous when Motörhead fans show up at an Alice Munro reading. Frankly, I blame Lemmy and his New Yorker subscription; “Ace of Spades” is laced with allusions to Munro’s "Something I’ve Been Meaning to Tell You.") Let me posit it this way. Fiction enters the eye and takes a circuitous route through the brain, which only gets to the heart after sustaining an almost dreamlike immersion. Whereas songs enter the ear and start jerking around with your heart or hips immediately, only rarely bothering to engage the brain. A poorly written story will just bore you, but a bad song inspires real ire and resentment that something so stupid is affecting you. It’s not so strange that cheap music is potent; that’s what cheap music does.

I emphasize this point because I think Tom’s grotesques work differently in song than they would in fiction. Certainly the outré imagery helps conjure some bizarre and freaky landscapes, but they don’t inflate the music the way they can in fiction. What they allow him, though, is another layer of metaphor, a point of personal insertion into the songs that isn’t dependent on confessional lyrics or reportage. There’s a reason why the Eyeball Kid has Tom’s birthday. The carnival air, the foreign backdrops, the dwarven and the misshapen have less to do with how he sees the world than how he sees himself.

In “Shore Leave” Tom stretches just beyond the lyrical territory that he’d established with his Asylum albums, but musically, vocally, even emotionally, this song marks a change. There’s a beautiful turn in the lyric after he’s set the scene when he says, “And I sat down and wrote a letter to my wife.”

I like to think I got more angry with "Swordfish" . . . More fractured. I sorta reached an impasse, y’know. Lookin’ back I can see I had governors on a lotta the things in my head. Had to shake ’em off. Uh, be a little more honest with myself. I sorta provided a commentary on things in my old songs now I kinda escape into the song more. More extreme I guess.

That’s it exactly. He enters the song in a way he didn’t before. And on the coda, when he shifts into a previously unimaginable falsetto to howl “Shore leave! Shore leave!” like a wounded animal, you know you’re hearing a new Tom Waits.

When Tom wants to conjure a mood that’s when he reaches for his boo bams. When they began to work on "Swordfishtrombones" Victor Feldman took Tom to meet Emil Richards, a veteran session percussionist who had worked on innumerable tiki music albums of the fifties and sixties, as well as Hollywood soundtracks. They wandered through Emil’s huge collection of instruments from around the world, selecting African talking drums, and aunglongs and bell plates. Tom had already had a chance to see and hear a junkyard orchestra in the “Used Carlotta” section of "One from the Heart" and he wanted to go further. He wanted each song to sound like a little soundtrack—not just the score but the sound effects too.

In each of the three albums of the Frank Trilogy, there is at least one song set in a place associated with international spy intrigue: Hong Kong, Singapore, Istanbul. I think it was liberating to let his imagination wander further afield than East St. Louis or Minneapolis.

I keep circling back to the notion of a necessary distance in these songs. In “Shore Leave,” “Singapore” and “Telephone Call from Istanbul” each character is far from where he wants to be. The extremity of the physical space from Hong Kong to Illinois, from the port of call to Singapore, from Istanbul (where his baby called from) to the “Mediteromanian hotel” marks some form of emotional longing. Tom wears his heart on his map.

There’s another aspect to Tom’s foreign adventures which isn’t that evident until you’re watching his movie "Big Time" with the band’s Louis Prima arrangement of “Telephone Call from Istanbul” and the fez-wearing band member and the lounge singer patter. It looks a lot like the lounge music revival that would begin about four years later in the early nineties—a revival that depended as much on exotica (faux tropical and Middle Eastern melodies) as it did on Rat Pack ring-a-ding. And there are places where "Big Time" also reminds you of They Might Be Giants or long forgotten world music bands like 3 Mustaphas 3—also about four years away. Something about the new arrangements built on Ralph Carney’s sax, I think, plus the usual dips into accordion, swing and congas. Now lounge and world music and TMBG are not your usual reference points for Tom Waits, but he could’ve easily moved in that direction from "Big Time."

I note this not because I think Tom should’ve zigged toward Buster Poindexter instead of zagging toward "Bone Machine" (another radical reinvention that still defies comparison). I just want to underscore how attuned Tom was to the musical undercurrents in the late eighties. Because his imagery draws from a mythical America between the World Wars, because he has so many acknowledged musical forebears, because his vision is so singular and distinctive, people still tend to think of Tom as a man out of time.

Tom Waits does not sit around listening to Leadbelly 78s all day. He’s an impurist, and his ears are always open. He watches Missy Elliott videos on MTV, listens to Paul Revere and the Raiders on the oldies station, buys Rage Against the Machine imports for his kids, tapes Gavin Byars off the radio and drops a few bills for the mariachi band standing outside the taqueria. His son, Casey, is a huge rap fan, so Tom Waits listened to a lot of rap music in the nineties. Then he went off and listened to his Leadbelly 78s.