"For the People": Justice in Shondaland, USA 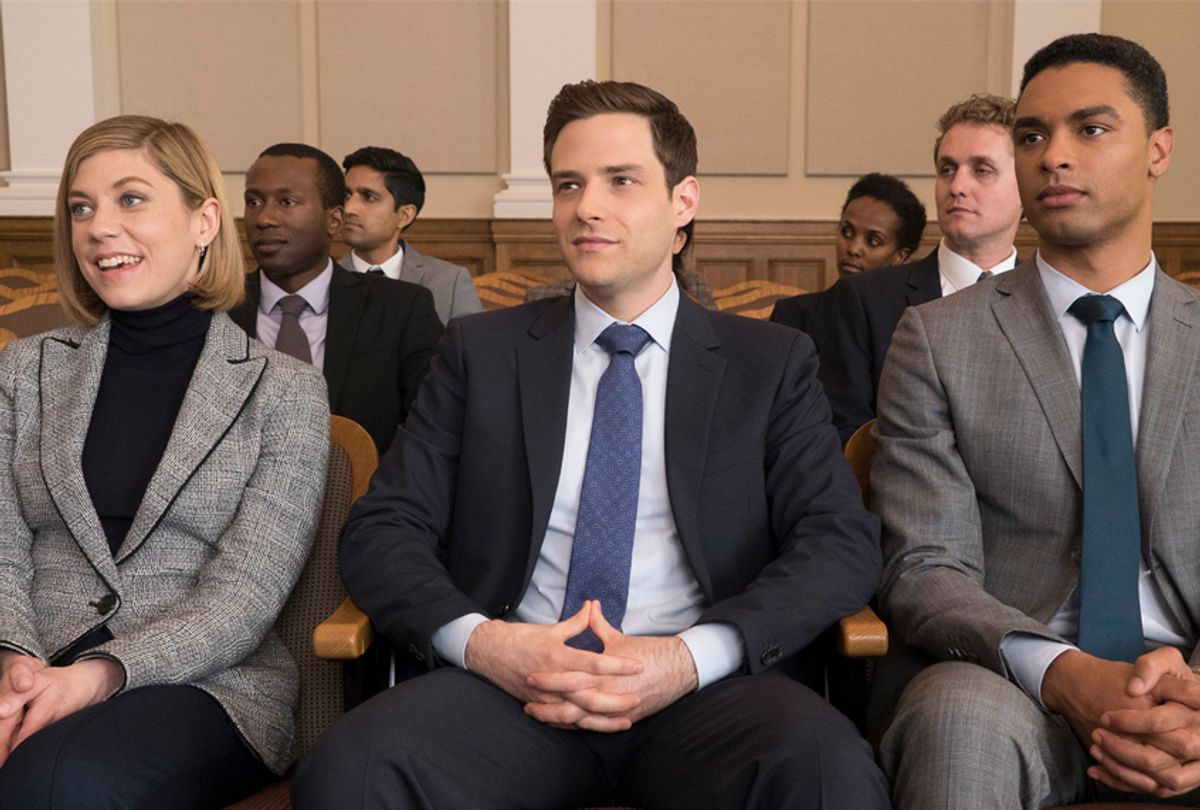 Susannah Flood, Ben Rappaport, and Regé-Jean Page in "For the People" (ABC/Eric McCandless)
--

Bless Shonda Rhimes. Seriously, you have to give it up for her ingenuity. She discovered a storytelling architecture that translates well to any number of scenarios — torrid love affairs, strong female friendships, complex male characters that we can’t decide whether to slap or to bang. You can recognize a Shondaland product when you see it.

She’s also passed along her signature recipe to a few producers who’ve proven able to replicate it. This includes Paul William Davies, a writer on “Scandal” whose creation “For the People” follows the formula while sneaking in a public service.

Premiering Tuesday at 10 p.m. on ABC, the legal drama utilizes a number of quintessentially Rhimesian devices while eschewing others. The ensemble cast doesn’t include any starkly morally ambiguous characters like Kerry Washington’s Olivia Pope on "Scandal," or Viola Davis’ Annalise Keating from “How to Get Away With Murder.” Instead, Davies returns to the root of it all, patterning its storyline development after the earliest version of “Grey’s Anatomy.”

At the core of the story are six ambitious and green lawyers working on opposite sides of the aisle at the United States District Court for the Southern District of New York, known as “the Mother Court.” Three are public defenders, with the remainder working for the prosecution.

Britt Robertson plays Sandra, a passionate and determined crusader working as a public defender alongside her best friend Allison (Jasmin Savoy Brown) and a bumbling, friendly underdog named Jay (Wesam Keesh). Contrasting their determined optimism are their cohorts in the prosecutor’s office, including the smug and confident Leonard (Regé-Jean Page), the by-the-book and overly rules-adherent Kate (Susannah Flood), and Seth (Ben Rappaport), a clean-cut white guy who looks the part of a man expecting the world to be handed to him.

Their frosty chief of the Criminal Division in the U.S. Attorney's Office Roger Gunn (Ben Shenkman) does not cut them much slack. His opposite in the federal public defender’s office Jill Carlan (Hope Davis) is no less dedicated to hardening up her relatively inexperienced charges while also acting as a mentor. Keeping everyone in line are the clerk of court Tina Krissman (Anna Deavere Smith) and Judge Nicholas Byrne (Vondie Curtis-Hall), the Mother Court’s version of parental figures.

Davies embraces a few of these tropes and turns others on their ear. The hub, however, is a kind of sisterhood bond shared by Sandra and Allison that mirrors the one “Grey’s” fans enjoyed between Meredith and Cristina. The latter left Seattle some time ago, and elsewhere, with “Scandal” coming to a close, the writers must be aware of an open position in the idealized TV friendship department.

Where “For the People” refreshingly veers away from the typical “Law & Order” television portrayal of swift jurisprudence is in examining versions of cases playing out in today’s political landscape, including a whistleblowing case that shows each side’s point of view in close-up, and factoring in the individual motivations of each attorney as well as their bosses. Or a case that begins as a hunt to put a dent in the opioid crisis to make an office’s political overlords happy, but transforms into something quite different, more personal and sinister along the way.

The court’s youngsters handle environmental violations, housing crisis exploitation and a terrorist threat within the first few hours. In one episode, a lawyer is faced with the difficult task of defending someone whose viewpoints are dangerously opposite his own. Selling all this are the typical disappointments, broken hearts and emotionally warm celebrations of battles won. We love the fire in the courtroom, but we also need a little popcorn and red wine at the end of it all.

Importantly, “For the People” balances its optimistic view of law and the courtroom with an approximation of the reality of what actually happens in trial situations. It’s a marriage of the purity of the laws on the books with the profanity of political demand. The prosecutors play to win and aren’t above getting their hands dirty to do so. Sometimes they do it for causes that serve the common good. Just as often they do it to pull out a win regardless of the cost to the human life caught in the balance. The defense is not above betraying confidences.

This is still very much a Shondaland show. But “For the People” exhibits, quite well, how crowd-pleasing  television can have a higher purpose by educated even as it seduces. Lots of long-running shows have played that role, for good or ill. “CSI: Crime Scene Investigation” was criticized for allegedly educating criminals as to how to cover their tracks while it was in production, but that assertion has since been disproven. Dick Wolf’s “Law & Order: Special Victims Unit,” on the other hand, was credited by a study cited in the Atlantic for educating viewers about consent and associated with “lower rape-myth acceptance.”

Will “For the People” leave average viewers with the impression that they can mount a defense should they find themselves in federal court? Heck no. But as it starts, its episodes place a vision of how justice is supposed to work front and center. In this anxious era of lawbreaking at the federal level increasingly perceived as business as usual, that message has real worth.