Your NCAA bracket is a reverse Turing test

As we outsource much of our lives to machines, March Madness remains an affirmation of our humanity 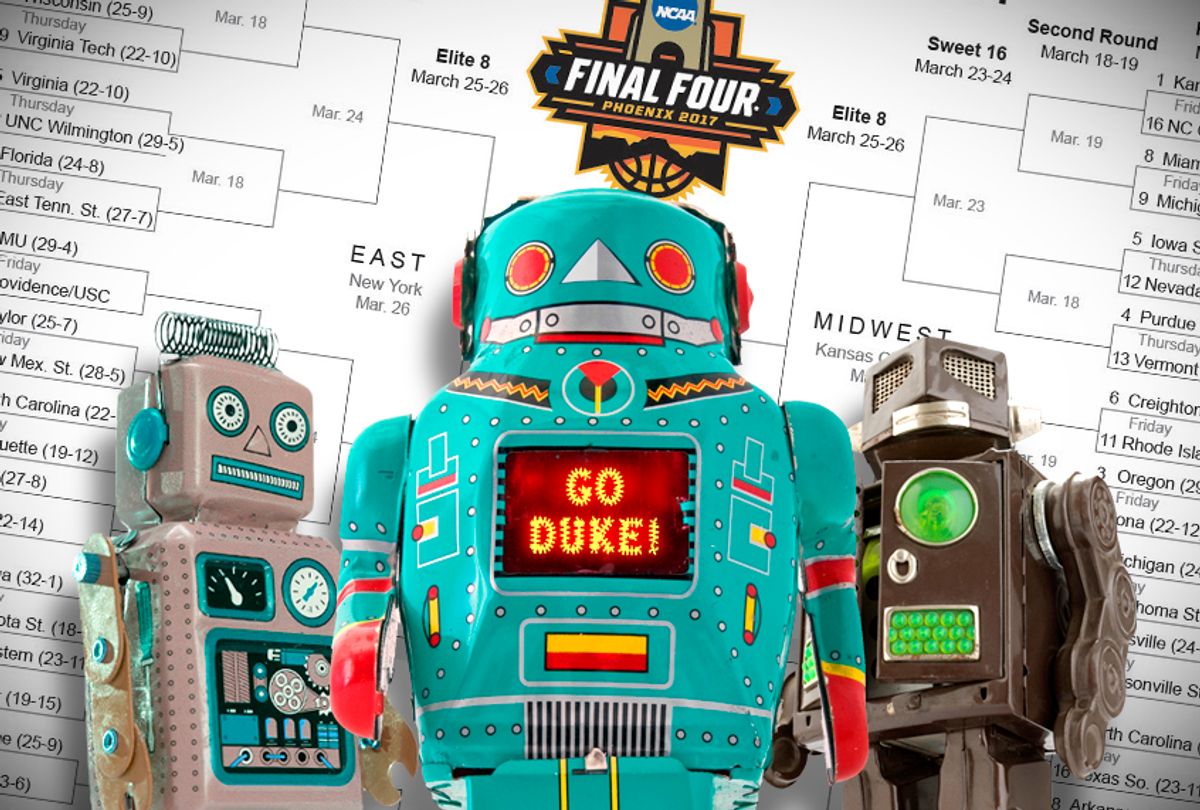 March Madness has begun. Cue the studies and stories about lost productivity, sports betting and consumerism run amok. But for all of the “sick” days taken, office pools created and revenues generated, March Madness shows us something remarkable — that we are, without a doubt, human.

Scholars like me worry that humans are starting to behave like predictable and even programmable machines. We’re surrendering our humanity to smartphones, digital assistants and fitness trackers one tap, swipe and click at a time.

Surveillance capitalism, or the monetization of data acquired through surveillance, allows high-tech media to grab and keep our attention while collecting, selling and using data about our moods, preferences, habits and lifestyles to nudge us. Just think of all the ads in your social media feed from brands with which you’ve never interacted.

And then there’s the endless supply of apps to solve our problems and manage our lives. Waze for navigation. Mint for spending. Moment for managing screen time. That the phrase “there’s an app for that” has become cliché only reveals how complacent we’ve become.

As we outsource our thinking to supposedly smart technical systems, as we mindlessly follow life-scripts written by others for the sake of convenience, we’re allowing ourselves to be engineered.

Yet despite these very real significant concerns about the techno-social world we’re building and what it means for us and future generations, rest assured that we’ve not yet been engineered to be machines. March Madness of all things provides proof!

Consider how we fill out our own brackets. Do we stick to the statistics and pursue the most rational strategy? Probably not. When we fill out a bracket, we are predictably irrational and distinctly human.

We believe — without evidence or reasoned justification — that our alma mater or our hometown team will win it all. We’re influenced by our emotions — love and hate — and a myriad of irrational factors — the most amusing mascots, the flashiest coaches, underdog status, the deep-rooted rivalries and even the rowdiness of a school’s fan base. Wishful thinking and holding grudges are distinguishing characteristics of humans not machines.

Now suppose someone programmed a machine to enter and win your March Madness bracket competition — say the one you run at the office, the local tavern, or at home with your family.

Can a computer program possibly understand basketball? Could it appreciate the differences between Villanova and UVA basketball? The truth is it wouldn’t need to.

The computers didn’t need to understand anything. They just needed sufficient computing power and data to be trained. Most of a machine’s strategic decisions would be determined by statistical analysis of data coupled with a firm, unwavering commitment to rationality.

Placed side-by-side, brackets created by humans would stand out among those generated by computers programmed to win. An effective reverse Turing test — like those CAPTCHA tests used to distinguish humans from bots — could even be designed using March Madness brackets.

A machine programmed to win would probably only include 1, 2, or 3 seeds in its Final Four. After all, with the exception of the 7th seed UConn, every national champion in the past 15 years has been a 1, 2, or 3 seed.

There is, however, an interesting caveat. If a machine generated its own statistically-based ranking that differed substantially from the seeds assigned by the NCAA selection committee, it might put a #4 or lower seed in the Final Four. After all, no matter how objective the committee might strive to be, it is comprised of humans and not machines.

But even with that in mind, only a human would have picked the No. 9 Wichita State to reach the Final Four in 2013, besting No. 1 Gonzaga and No. 2 Ohio State on the way. No rational, data-driven analysis could have ranked Wichita State high enough to merit such a decision. In fact, according to FiveThirtyEight, Wichita State had only a 1.3 percent chance of reaching the Final Four when the tournament began and brackets were filled.

Of course, what makes March Madness exciting, fun and crazy mad is the collective fantasy and social experience. For most of us, the bracket-filling game is about much more than winning. We think differently when we play.

We socialize through our brackets. Competitions within offices, homes and virtual communities celebrate our idiosyncratic human beliefs and commitments. Even those of us who dig into the stats and develop our own ranking algorithms get caught up in the madness of being human and engaging with our peers.

So rest assured, as you click, tap and swipe, your humanity hasn’t completely disappeared. At least, we still have March Madness.

Brett Frischmann is the Charles Widger Endowed Professor of Law, Business and Economics at Villanova University. His forthcoming book, "Re-Engineering Humanity," co-authored with Evan Selinger, Professor of Philosophy at Rochester Institute of Technology, will be released in April.