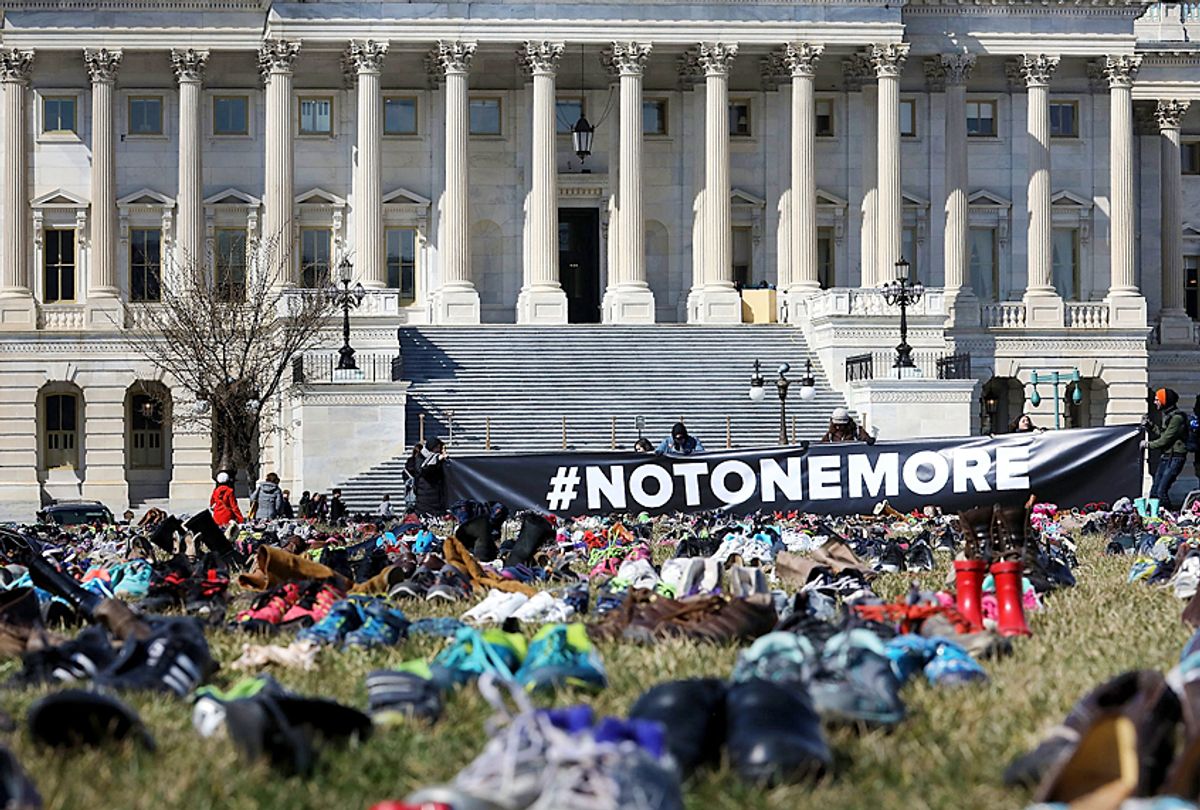 Shoes can be a powerful symbol in a memorial — think of the heartbreaking shoe exhibit in the Holocaust Museum. On March 13, an advocacy group organized a demonstration harnessing the metaphor of children's shoes to bring “the heartbreak of gun violence to Congress’ doorstep” by decorating the South East Lawn of the Capital with 7,000 pairs of shoes.

"Shoes are individual. They're so personal. There are ballet slippers here and roller skates. These are kids," Nell Greenberg, the campaign director for Avaaz, who organized the demonstration, said via CNN.

The idea was to build “a monument on the Capitol lawn for the children we’ve lost to guns with 7,000 pairs of shoes, representing every life taken since the Newtown shooting,” AVAAZ, a US-based civic organization, explained on its website.

The global advocacy group started receiving donations of shoes on Feb. 28, and began to place them on the Capitol lawn at sunrise on March 13.

The organization picked the number 7,000 based on the Centers for Disease Control (CDC) statistic that an estimated 1,300 of children are killed by guns a year. Between now and the Sandy Hook Elementary School shooting in Dec. 2012, that would total an estimated 7,800 children's lives — at least — taken by gun violence in America.

This isn’t the first time Avaaz has organized a memorial installation using shoes.

“In Paris after the terrorist attacks stopped the big march ahead of a global climate summit, we pulled together a beautiful installation of shoes. Pope Francis, UN Secretary General Ban-Ki Moon, Marion Cotillard, along with thousands of others donated a pair of shoes in solidarity,” the organization explains.

Reportedly, some family members of school shooting victims donated shoes in honor of those they had lost. As CNN’s Ashley Killough shared on Twitter, there was even a pair from a family whose son perished in the Columbine Shooting, which killed 15 people in 1999.

Observers on Capitol Hill have tweeted about the gripping scene.

The display comes nearly one month after a gunman killed 17 people at a Parkland, Florida, at Marjory Stoneman Douglas High School in Parkland, Florida, and the day before a planned national school walkout on March 14. For tomorrow's walkout, students and teachers nationwide plan to walk out of their schools and colleges in honor of Parkland victims, and to press Congress to pass stricter gun control laws.