Trump's an expert at hijacking headlines with culture-war stunts. His California invasion is just one more 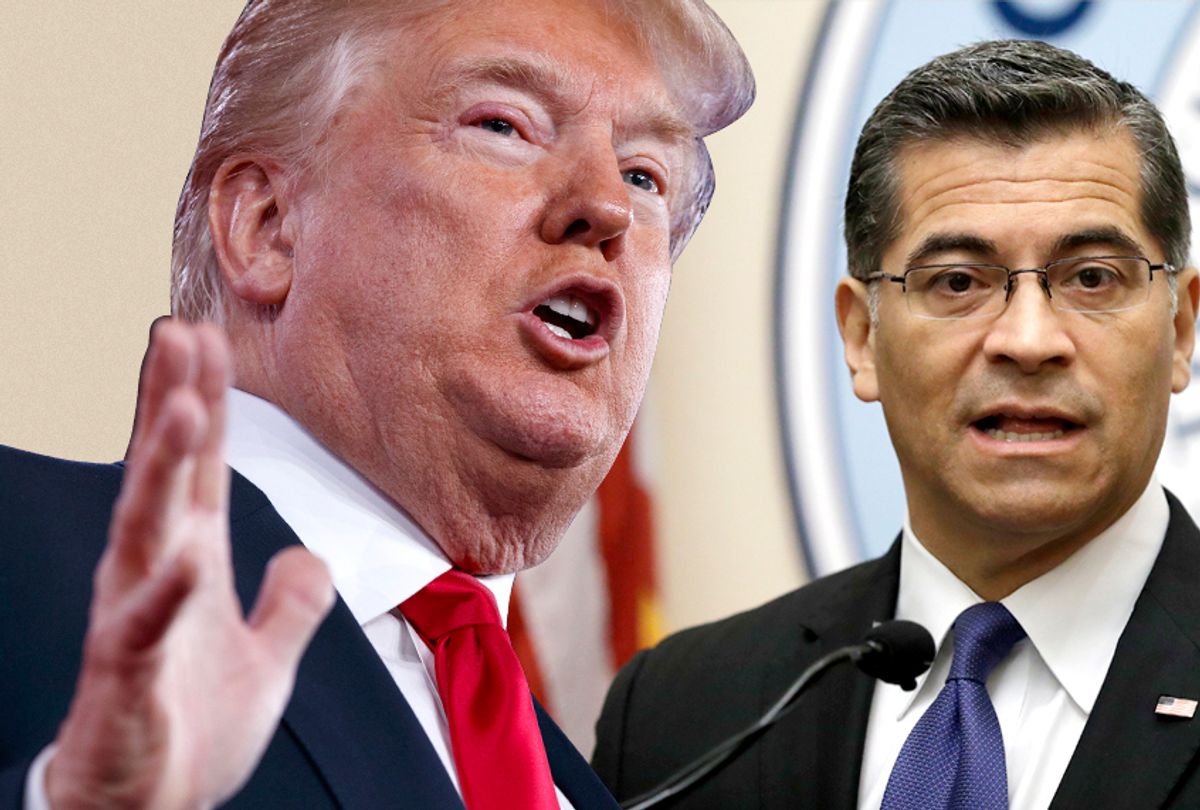 Donald Trump has been on the ropes lately: Special Counsel Robert Mueller's investigation seems to be uncovering all sorts of damaging information, leading Mueller to expand his timeline for the probe. The chaos in the White House is even worse than usual, leading to rumors that Trump's own family members may be departing. The president's approval ratings remain low, and his lies about it smack more of desperation than a confident despot's ability to control the narrative. The more Trump's team tries to shut up Stormy Daniels, the more headlines she gets for her claim to have had an affair with him during his D-list celebrity days.

So Trump is returning to the territory where he's most comfortable and to the behavior that won him the 2016 Republican nomination in the first place: Being a troll. On the taxpayer dime, Trump will kick off a trip to California on Tuesday that, regardless of official explanations, is clearly intended as a political stunt to distract his base voters away from his myriad of scandals and remind them that Trump is their man because he pisses off liberals.

In the past few weeks, conservative media and the Trump administration have worked together to demonize California, casting the nation's bluest (and most populous) state as a symbol of liberalism for the base to rally around in hatred. Last week, Attorney General Jeff Sessions announced that the Department of Justice will sue California's political leaders over state laws limiting the authority of federal immigration officers, which Sessions equated to a "radical open borders agenda." Trump claimed last month that such laws would lead to "crime like nobody has ever seen crime in this country."

During his rambling speech at a Pennsylvania rally over the weekend, Trump declared that cities and states with laws like California are the "best friend of smugglers, gang members, drug dealers, human traffickers, killers and other violent offenders," implying as usual that immigrants commit a disproportionate amount of crime. (In reality, high immigration is linked with lower crime rates, and native-born citizens commit crimes at higher rates.)

In response to these attacks, California Attorney General Xavier Becerra said at a press conference, "We are in the business of public safety, not deportations."

Right-wing media has now jumped in, eagerly portraying California as some kind of war-torn hellhole and implying that immigrants are to blame.

"U.S. News Crowns California Worst State for 'Quality of Life'" crowed a Breitbart headline, under which Chriss W. Street writes, "Three in 10 Californians were born outside the U.S. — the highest in the nation — with about half of the immigrants moving up from Latin America and about 39 percent coming from Asia."

What Street failed to note is that the quality of life rankings had nothing to do with the proportion of immigrants that are in a neighborhood but reflected high levels of pollution and low levels of social engagement. Those problems are serious, but clearly unrelated. For what it's worth, California politicians are eager to improve environmental quality but must fight the Trump administration every step of the way.

Trump's plans for his visit are vague, though he will reportedly hold a photo-op in San Diego, while he looks at prototypes for his much-ballyhooed border wall. But drumming up hatred for California and then showing up there smells a lot like a culture-war stunt. Trump's trip could well be designed to attract protests that can then be breathlessly covered by Fox News, reminding their viewers that their scandal-ridden president is still eager to "trigger" liberals with his overtly racist views and belligerent rhetoric.

White House Press Secretary Sarah Huckabee Sanders, striking her usual tone of faux-outrage, claimed on Friday, "We're going for what we hope to be an incredibly positive trip."

State leaders in California seem skeptical. In anticipation of Trump's visit — and in response to Trump painting their state as a crime-ridden hellhole — Becerra and Gov. Jerry Brown have held public events highlighting the state's robust economy and progressive values.

"California is a trailblazer, a pacesetter and an innovator," Becerra said in another press conference on Monday, adding that his office has sued the Trump administration 28 times so far in order "to protect our policies that have made California the No. 1 engine for our nation’s economy."

"California thrives because we welcome immigrants and innovators from across the globe," Brown wrote in a public letter to Trump, adding, "in California we are focusing on bridges, not walls."

That Trump's trip is more a big political troll than a visit by the nation's chief executive is evidenced by the lack of clarity around Trump's schedule. He's doing his San Diego photo op and attending a well-publicized fundraiser in Los Angeles, events that should draw plenty of protesters for Fox News to demonize. There's no indication that Trump intends to meet with state leaders to discuss policy.

"I’m not sure that the White House has included California, its leaders, or its people in its decision to visit the state of California," Becerra said Monday, adding that while previous administrations have generally been clear about the schedules of touring presidents, "everything is clouded in mystery" with Trump.

“We’ve made many overtures to the Trump administration since I first took the position more than a year ago as attorney general," Becerra said. "In most cases, the response has been no response."

"Donald Trump is enacting a presidency devoted to the culture war, more so than any president in recent history," Paul Waldman of the American Prospect wrote in September, adding that whenever Trump "experiences some kind of political setback — he turns back to the white identity politics that got him elected."

The California visit must be understood in this light. Trump is facing multiple scandals and coming under increasingly dangerous legal scrutiny. His own base is losing enthusiasm, while Democratic voters are getting fired up as the midterm elections approach. So his administration has spent the last month pushing racist propaganda that paints California as a criminal dystopia, thanks to immigration and racial diversity. Having maximized anger in the state, Trump suddenly schedules a visit in hopes of producing cable-friendly confrontations and shots of angry protesters.

This approach certainly worked on the 2016 campaign trail, when Trump canceled a Chicago rally at the last minute because of protests, and let the racist outrage of the conservative base in response help propel him to the Republican nomination. But what worked on Republican primary voters two years ago might not work on the whole nation now. Trump's trolling may, in the end, galvanize even more outrage — and energy — in the resistance.