Can light topical conversations hosted by stars bridge our widening social divide? No. But it's a noble effort 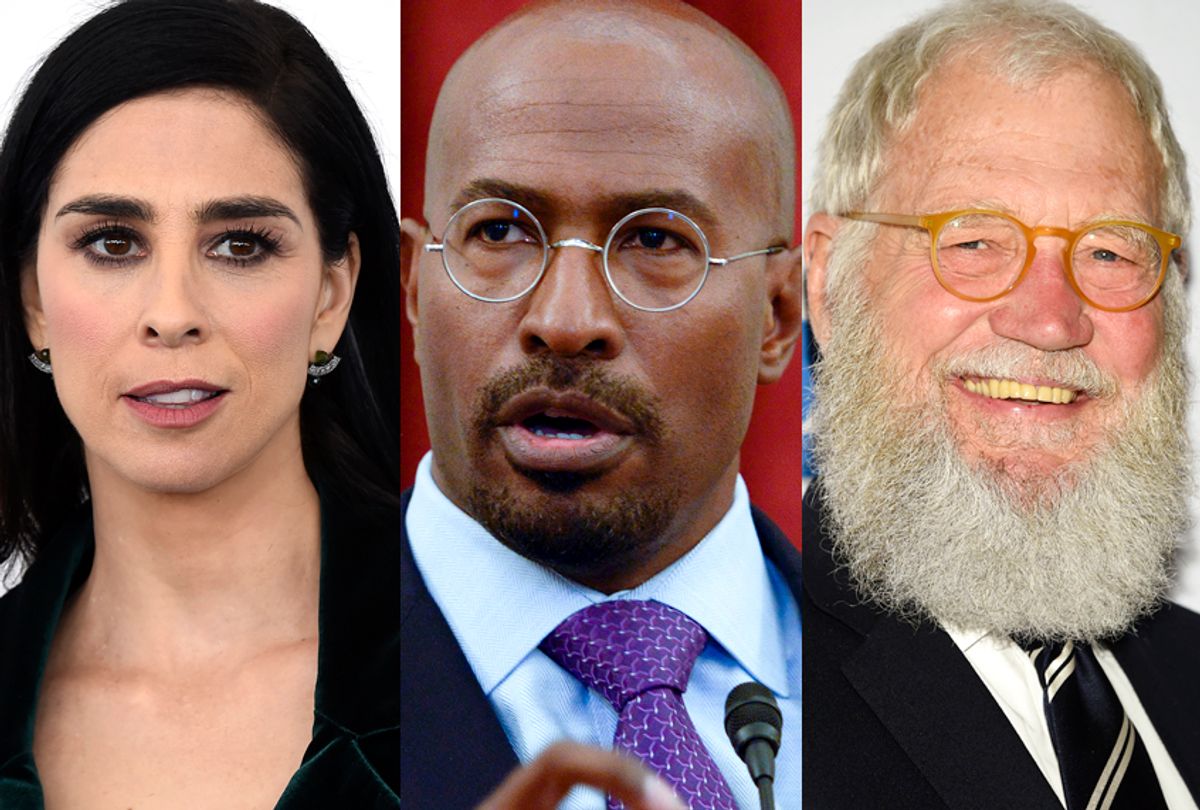 During the March 10 edition of CNN’s “The Van Jones Show,” its host lamented that his “love army” approach keeps getting smacked down by people on his own team — folks who are tired of “going high,” to paraphrase Michelle Obama’s famous advice.

“I’m tired, I’m frustrated, I’m even scared about what’s happening with our political system,” Jones admitted to his audience as the episode opened. “The overall vibe around politics is just so negative and so nasty. I’m staying involved and I’m still in the fight. But honestly, I’m looking elsewhere for wisdom and for insight and understanding.”

But what he said next speaks to where shows like his should be seeking to cultivate an audience. Jones explained that his love of bringing cultural icons to his series, and taking his conversation beyond the city limits of Washington, D.C., is because he finds that people who aren’t politicians can be more honest, more real and truthful sometimes than the politicians.

“On the ground, the personal stakes of these issues are a lot higher, but the circles are smaller,” he explains. Because of this, he continues, “the conversations feel a lot different. Like you can actually get someplace eventually.”

Jones opened the episode that way to introduce his very famous not-a-politician guest Oprah Winfrey, who’s been popping up on a lot of talk shows these days. There’s a good reason for this: She’s making the rounds to promote the recently released “A Wrinkle in Time.” Before that, calls for #Oprah2020 achieved liftoff in reaction to her Golden Globes speech. Even though she insists she has no intention of running, they keep ringing out.

But this speaks to what Jones is saying, albeit on an extraordinary level. Oprah has the capacity to bridge our nation's empathy gap. She's monetized that trait many times over and continues to do so in a variety of ways, the most front-facing being as a “60 Minutes” correspondent.

Possessing such an ability to connect with the other side is rare, but not unique. A number of famous people have it. But only a few are using it in ways that serve the cause of starting conversations we need to have as a nation as opposed to preaching to the choir.

One such star is David Letterman, who returned with great fanfare with his monthly Netflix series “My Next Guest Needs No Introduction.” Letterman’s iconic status as a late-night host and America's cranky uncle doesn’t require much of an introduction either. But in this series he presents one interview per month as opposed to four or five per week, and as such, dives deep with one gigantic celebrity each time.

His first get was President Barack Obama, who surprised a number of critics with his comedic agility, although he’d already demonstrated his prowess at delivering good-natured comebacks in Jerry Seinfeld’s web series “Comedians in Cars Getting Coffee.” February brought us George Clooney. On International Women’s Day, March 8, viewers were treated to the debut of his hour chatting up Malala Yousafzai, an activist and Oxford student devoted to attaining universal education for girls around the world.

Much of the larger discussion about speaking across America’s yawning political divide has involved an assurance that we’re really not as far apart as we think we are when it comes to some issues. Talking to our neighbors, spending time in our communities, is all it takes to find the truth in this statement. As a people, we also love the distraction of entertainment, and we find our entertainers endlessly fascinating. Thus when Jones admitted he was looking more toward the artists, poets and mystics for conversations on his series, his bosses likely gave him a thumbs up. Distraction from the unrelenting distress created in part by CNN's news cycle is a smart sales pitch. Dialing it back is healthy; tuning out entirely is not. Presenting topical context wrapped in celebrity packaging allows the audience to remain connected to matters impacting our democracy and life on this planet in whatever ways we can stomach.

This is where Letterman uses his star power and his skills as a conversationalist to sneak in portraits of America that speak to who its citizens are as opposed to the vaunted position very few of them hold in our society -- or, in the case of Yousafzai, what they symbolize to us.

His interview with Obama was the first to demonstrate that strategy, mixing live onstage banter with the former president about life after the presidency and his goals moving forward with the acknowledgement that his eight years in office came as the result of decades of gains by the Civil Rights movement. This scene was interspersed with a filmed interview with Congressman John Lewis, which was in part filmed on location as he and Letterman strolled over the Edmund Pettus Bridge in Selma, Alabama.

The Clooney interview proved even more stealthily purposeful by using one of America’s classic crushes to slide in a portrait that speaks to the heart of the nation’s legacy in offering refuge to immigrants. One minute Clooney is flashing his megawatt smile at Letterman and joking about his retirement beard (Obama called it “biblical”), and the next we’re meeting Hazim Avdal, an Iraqi refugee sponsored by Clooney’s parents Nick and Nina and living in their Kentucky hometown.

Avdal evenly tells Letterman about his harrowing life, starting with the Iraq war in 2003, when he was 9 years old. He learned English from his cousin, who was a translator for the United States military and was killed by al Qaeda for that very reason. Later ISIS would wipe out his entire town; he and his family made it out about 10 minutes before members of the terrorist group arrived.

“Living through that is imponderable,” Letterman observes. But a few scenes later, the whole family is strolling down the sort of tree-lined street evocative of small-town America as Letterman remarks upon the fact that although they’re in a red state, the Clooneys have encountered no resistance to having adopted an Iraqi refugee. “On a one-on-one [basis],” Nick says, “this is a very generous community.”

Letterman is merely the latest to this arena, of course. The entire reason for Sarah Silverman’s “I Love You, America” to exist on Hulu is to allow the comedian to explore and portray all the ways that it’s possible for Americans to live in harmony and accept one another’s differences. She did this by venturing into deep red state territory as well as by hitching rides with families driving across midtown Manhattan, all with a smile and an air of innocent curiosity.

When she holds forth on a topic, she does so with the same soft kindness — for example, when she explains why “America First” jingoism is not in alignment with loving the country.

“The difference between loving America and ‘U.S.A. Is Number One!’ is like the difference between a desire for progress and change versus ‘we’re perfect and we’ll never change,’ which is crazy because change is how you stay number one. If you don’t change with the times, you die,” she says in one monologue. “. . .We criticize the things we love because we want them to be better. In some ways, to criticize is to love.”

The people to whom Silverman’s words are directed won’t tune in to hear them, mind you. Indeed, Letterman’s series faces the same limitations. Viewers predisposed to detest any left-leaning entertainer probably aren’t going to bother with “My Next Guest,” and probably crossed it off their lists the moment that Barry “Secret Muslim” Obama was revealed as the show’s first sit-down.

It’s also telling that these shows are on streaming platforms as opposed to broadcast or cable outlets, where appealing to the widest audience possible is any show’s main selling point. (This means that we should not expect, say,  ABC’s “Sundays with Alec Baldwin” to speak to the opposition in any fashion that does not relate somehow to the greatness and mystery of Alec Baldwin.) Video on demand services are built to serve the fragmented audience; viewers can opt in to any type of entertainment experience they want on these services, and each service’s algorithms further personalize the individual customer’s experience. They move with the problem as opposed to offering a solution. Therefore, the likelihood of “My Next Guest” or “I Love You, America” shifting the tenor of the conversation in a major way is slim to nonexistent.

But the fact that the Silvermans and Lettermans of the world have serialized platforms to make their cases for healing at all is an important offering to the smaller circles to which Jones refers.

And all is not lost in the cable realm; Jones may be confronting pushback for his efforts, but seeking out conversations with “the other side” won W. Kamau Bell an Emmy for his series “United Shades of America.” As part of that series, returning to CNN for a third season on April 29, Bell has walked into an alt-right convention and taken cameras to a local Klan rally. He’s ventured deep into Appalachia, spoken to protestors at Standing Rock and examined the segregation that exists on the South Side of Chicago.

He allows the opposing side to speak, and when and if they’re willing to listen he engages in dialogue. This is micro-level connecting as opposed to Oprah’s macro-impact. But it’s an incremental step toward that new place Jones is hoping we’ll arrive at soon. Even if we’re not specifically trying to get there, that’s fine. Letterman is chatting up Jay-Z next, which is bound to be entertaining above all and, purely by accident, could leave us with a few ideas to ponder.