Behind this week's Russia headlines: A mystery, a leap to conclusions and a fateful turn

Did the Russians try to murder a former spy? Maybe. But that has little to do with the larger Russophobe narrative 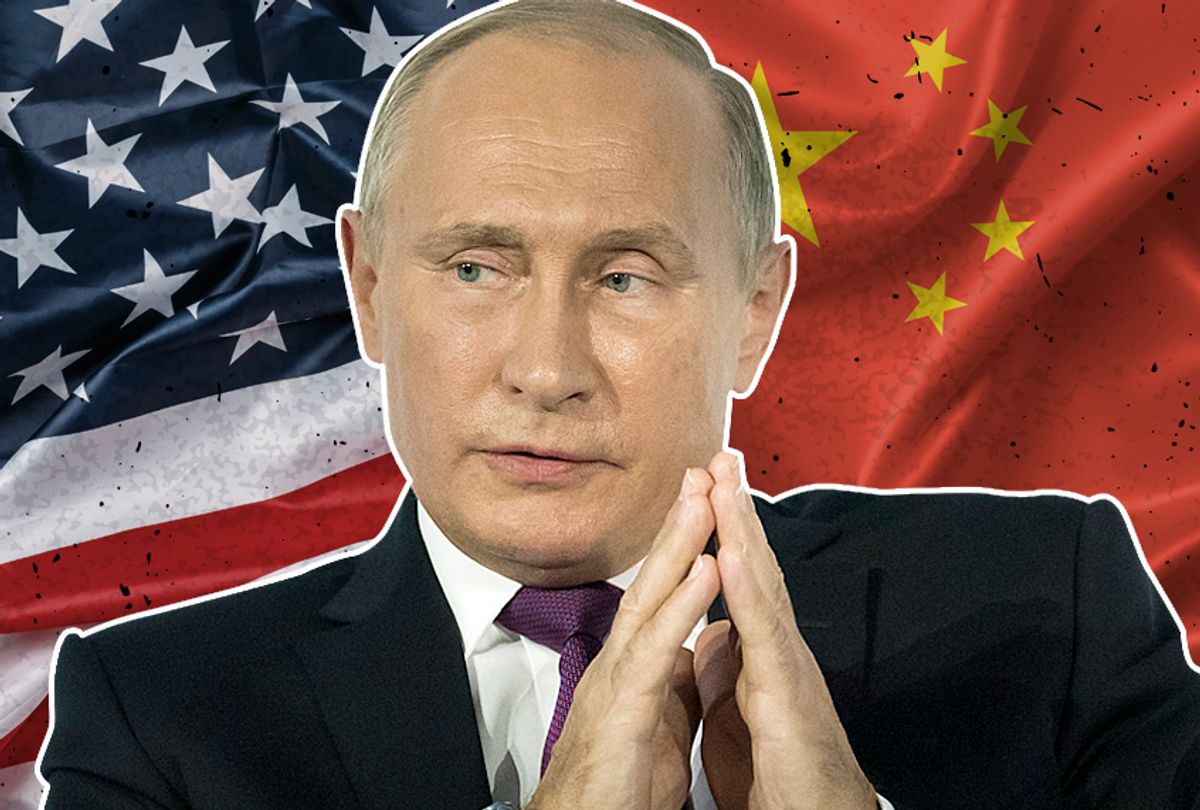 What a week for the Russophobes. The British government pins an unsolved murder attempt on Moscow, and the French, Germans and Americans quickly pile on. Washington imposes still more sanctions on Russia for its meddling and “malicious cyberattacks” during our 2016 election season — this out of the blue, it's fair to say, given that nothing new came to light last week. Treasury then accuses Russia of hacking into the very heart of America’s heart — the power grid, the nuclear generators, the water systems, manufacturing operations — and asserts they have their fingers on the cyber-levers as we speak.

Exhausting. By the end of the week I thought of those early-1950s horror movies, wherein the cameras linger on mobs of innocent citizens as they hold their hands up and their faces dissolve into a combination of fear and revulsion. That is what we are supposed to feel, do and look like, it seems. The Russians! They lurk above us poised to destroy all at any moment. Only truth, justice and the American Way — as managed by patriots such as Treasury Secretary Steve Mnuchin, a Clark Kent if ever I saw one — can save us.

All that has transpired in recent days we have seen before, of course. The propagandists are vastly overdoing it, in my view, but I am always proven wrong on this point: They slather it on with trowels, but they still get the majority of people to go along. The whole sorry mess still appears, straight-faced and grave, on page one of the New York Times.

But I detected something different this past week. Maybe it is merely a matter of a lot of disinformation delivered all at once, but it appears the West, with Washington in the lead, is preparing to provoke a possibly fateful confrontation with Russia. The volume is getting very loud, let’s say. This one does fear for.

There is one other thing that ought to be mentioned straightaway. Gazprom, the Russian natural gas producer, shipper and marketer, will soon cut staff at its European trading desks — the hub of which is in London, where it employs 1,000 people — by more than half. Reuters published the story Wednesday as an exclusive, and nearly no one took note. “This work is aimed at strengthening the company’s position abroad,” a Gazprom official explained.

What does this tell us? Gazprom cuts its trading staff in Europe to strengthen its export business? What could this mean? I will return to these important questions.

These latest, acute symptoms of Russophobia began with another of those mysterious murders of mysterious Russians living in England. Sergei Skripal had been a Russian intelligence agent but also a double agent working for MI6. Russia tried and jailed him for treason in 2006, but he was released in an exchange of spooks four years later, whereupon he withdrew to Salisbury, one of England’s pleasanter cathedral towns. Skripal and his 33-year-old daughter were found unconscious on a park bench on March 3, apparently victims of a surreptitious attack with a deadly toxin that did not quite finish its work: They remain hospitalized in critical condition.

British authorities began an investigation, of course, but proper investigations into Russia-related matters have not counted for years. What ensued is a pattern that is remarkable for its flimsiness, but also for its fidelity to itself and its effectiveness. Verbs are key, and one must watch them carefully: The conditional goes to the probable to the certain and then to the factual, and no one is any longer waiting for the results of any investigation. This process typically takes about two weeks, as it has in the Skripal case.

Prime Minister Theresa May did her duty when she addressed the House of Commons early last week. She took the narrative of Russian culpability to the “highly likely” stage, and then refined this to the “only plausible explanation” phase. She then announced that 23 Russian diplomats were to be expelled — again, without reference to an investigation that has scarcely begun. Neither has London indicated any intention of providing Russia with samples of the nerve gas allegedly used, as Moscow had requested in its offer to cooperate. This is how events are blurred in these cases.

Assent from the Americans and the Continental allies followed late last week. But there remained one step to take, and Boris Johnson, May’s foppish foreign minister, took care of it on Friday. “Our quarrel is with Putin’s Kremlin,” he said — on the basis of nothing, so far as one can tell.  “We think it overwhelmingly likely that it was his decision to direct the use of a nerve agent on the streets of the U.K.”

From a park bench in provincial England to Putin’s desk: Twelve days, start to finish.

The Skripal case created a near-perfect occasion for the Trump administration’s announcement of a new set of sanctions. These cover the 13 people and three organizations that the Mueller investigation indicted a few weeks ago, so it is quite neat in that little or nothing, apart from their value as “perception management,” will come of either the indictments or the sanctions. Ditto the Mnuchin account of cyberattacks on American infrastructure. But there is more of this coming. This was the disturbing message in the Mnuchin presentation: You will never see any evidence of anything we tell you, but we are going to keep this up. It is all “ongoing,” he emphasized repeatedly.

How to think about these matters? Let me start with my theory of the Skripal case.

I do not have one.

It is plausible that elements in Russian intelligence acted, with or without official approval, against Skripal. The man lived on the dark side, after all, and his life and loyalties are an iceberg. But it is a stretch, in my view, to accept that someone released eight years ago and since then retired in obscurity abroad was still the object of Russia’s wrath. One would require a clear explanation of motive, and we have not been offered any shred of one. Senior Russian officials asserted they had none, we ought to note.

These things said, I vigorously object to the catchphrase of the week: Russia’s culpability is the “only plausible explanation.” Skripal worked for MI6 as a double agent. Why is it not plausible that Six is the responsible party here, for reasons as illegible as any Russia may have had? And Six knows very well how to make what it does look like someone else did it — elementary tradecraft. As I read events, it was with May’s “only plausible” assertion that her government overplayed its hand: In my mind it raises the very possibility that May intended to keep far out of view.

By the past record, we will never know what befell Skripal and his daughter and why. We can be more or less dead certain why the Trump administration declared a new set of sanctions last week for no apparent cause. Trump and his inner circle, of which Mnuchin is a member, now face mounting pressure to capitulate in the face of the never-ending Russiagate rubbish. And Trump made his strategy clear weeks ago: He will go along with the orthodox narrative so long as he is spared charges of collusion. This is the transaction we are now watching. Trump is spared impeachment proceedings and the Democrats and Mueller-ites, chicken-scratching for many months, are spared embarrassment.

Last week leaves us with three things to think about. I have just suggested one. Trump’s support for May in her attempt to cover up a mess of one or another kind, along with the new sanctions, are about Trump’s political predicament, not the truth of events. This is perfectly legible. Mnuchin’s bit is mere icing on the cake. American politics has been reduced to spectacle for ages; now foreign policy is, too.

As of last week Trump is confirmed as a captive of his own government, in my view. He has strings attached to his arms, legs and jaw. Am I talking about the Deep State? Well, I do not at all mind the phrase, but let us call it simply “Part C” — People Actually Running This Country.

As to the Brits and Continentals, last week was a depressing one. The Europeans have now fully re-enlisted as the grunts in America’s getting-to-be-desperate campaign to maintain global primacy. The Greeks before Syriza capitulated to the European Union, Podemos in Spain, Die Linke in Germany — those years are by the boards now. Jeremy Corbyn’s returned-to-roots Labour Party remains interesting. But even if he is elected prime minister, Corbyn is not going to turn Europe around. He may turn out to be another Bernie Sanders — not an appealing prospect.

One had hoped for much by way of a more independent Europe, but there is simply nothing there for now. On Friday — tangentially related matter — none other than Britain, France and Germany proposed imposing their own new sanctions on Iran to keep the Trump administration in the nuclear agreement. Pitiful.

The final thing to think about is that Gazprom announcement. Plans to restructure its export marketing away from Europe were in place months before the Skripal case and related events, Reuters reported. And I do not want to read too much into this. But I think it is a piece of a far larger phenomenon.

For centuries the West held many monopolies, and high among them were markets and capital: If you wanted to sell it or finance it you had to sell it to the advanced industrial nations or borrow from them. They were the planet’s only game. This is no longer so. The non-West, China in many ways in the lead, has voracious markets and plenty of investment capital now, too. The Russians know this. How do you cut staff in Europe to grow your exports? You bring staff home and face them east.

This last topic is vast. I have written of it before in this space and shall do so again. If I read Gazprom’s plans correctly, it is one tiny manifestation of Russia’s gradual rotation from Europe as its primary export market to what is traditionally called Eurasia. And the West, which never seems to consider unintended consequences, is doing all it can to hasten the turn.