"Brooklyn Nine-Nine" is back, and awake to the nuances of orientation and identity 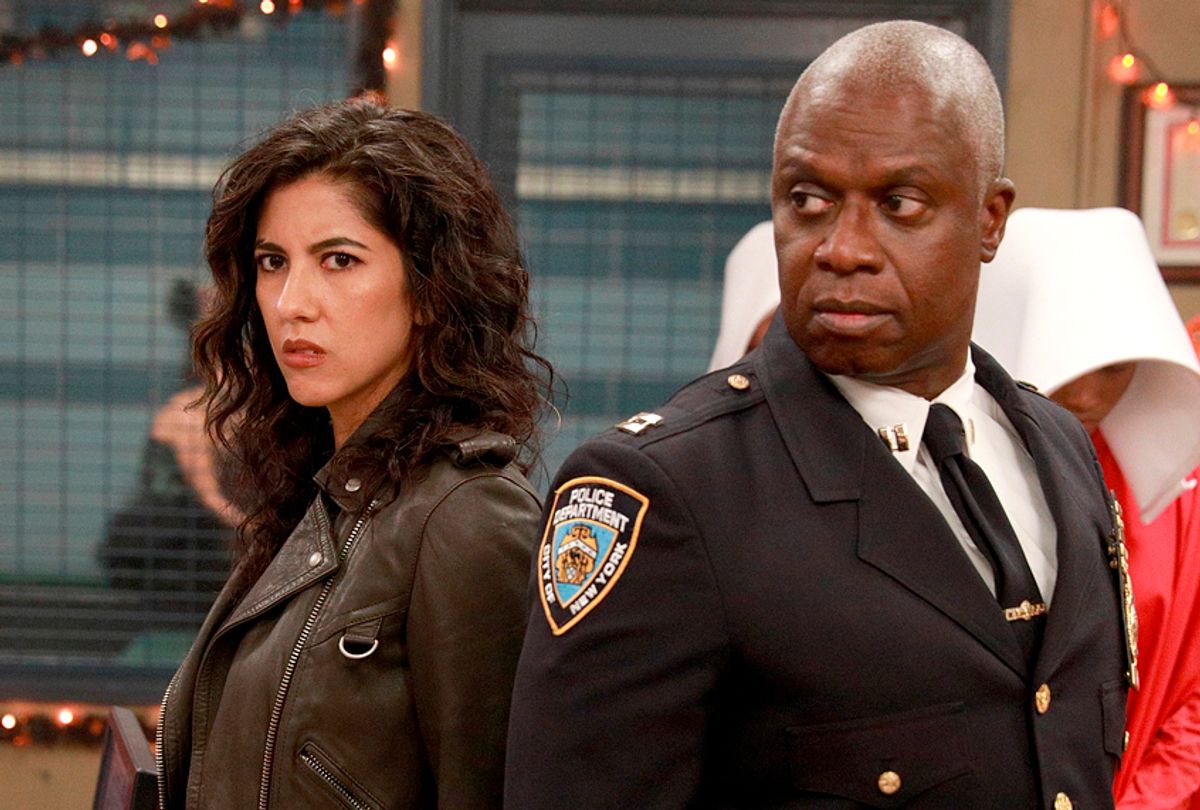 The fifth season of "Brooklyn Nine-Nine" resumes Sunday at 8:30 p.m., a return worth noting if only because the Fox comedy is one of the few reliable sources of good-natured comedic relief on the broadcast schedule.

Veteran sitcoms like "Nine-Nine" are necessary pressure valves releasing the stress internalized by absorbing endless news born of chaos and a dire level of uncertainty about the future. And the writing on Dan Goor and Michael Schur's series dependably clicks along in a way that's comforting without succumbing to dullness. Like Schur's other comedy "The Good Place," "Nine-Nine" skillfully tosses in twists that resolve sensibly and without violating the zany appeal of the scenario.

The agreeability of "Nine-Nine" is so potent, in fact, that one of this season's most significant contributions to culture may have escaped mainstream notice when it first aired in December. Mind you, the revelation that Stephanie Beatriz's character Detective Rosa Diaz is bisexual made headlines, and major outlets covered the event, hooked to the series' 99th episode, by featuring interviews with the actress who, like her character, is bisexual.

But rather, it's the specific manner of her coming out that matters. In the episode called "Game Night," currently streaming on Hulu, Rosa stands up at the precinct's morning run-down and tells her co-workers there's something she'd like to say. "I'm a pretty private person, so this is kinda hard for me, but here we go." She takes a deep breath and says, "I'm bisexual. All right. I will now field one minute and zero seconds of questions pertaining to this. Go."

The questions that followed ranged from the predictable to the stupid, and people who haven't seen this show might roll their eyes at the contrivance of coming out during a team meeting at work. Given the freewheeling and aggressively affectionate nature of the 99th's workplace, it makes sense.

None of that matters as much as fact that the writers scripted the term "bisexual" into Rosa's dialogue instead of, say, having her show up with a woman and imply their relationship, perhaps leading her co-workers to guess at her orientation. Many other series would handle Rosa's sexuality thusly. "Nine-Nine" simply laid it out and moved along.

We've long passed the era when gay and lesbian characters occupying prominent roles on TV series could be deemed remarkable. "Brooklyn Nine-Nine" provides a prime example of this in the precinct's Captain Ray Holt (Andre Braugher), who is more remarkable for his pathological fastidiousness and adherence to etiquette than the fact that he is a gay man who is a respected officer on New York City's police force. Sunday's episode, in fact, spins around Ray's over-the-top protection of his husband Kevin (Marc Evan Jackson), who he believes is being targeted by a mobster.

The sitcom's portrayal of Ray and Kevin's sublimely matched devotion to etiquette and propriety provides a bottomless well of material, enough to the point that their romantic bond, while obvious, is never the main event. The writers' conscientious approach to the series as a whole allows Ray and Kevin to simply be as they are, which is sufficient.

But broadcast TV is only at the beginning of processing how to thoughtfully and honorably portray orientations and identities that do not fall into one category or another. Rosa's revelation is important because it leaves no room for equivocation. It's as key as, for example, when Asia Kate Dillon's non-binary character Taylor on "Billions" specified that their pronouns are "they" and "their." Or when HBO's "Here and Now" depicted a conversation in which Muslim teenager Navid (Marwan Salama) identifies as gender fluid.

Premium cable has a long history of exploring sexual orientation and identities, with varying degrees of success. Characters on broadcast who may not neatly fit into codified boxes are still not as typical as one would like them to be. Yet, they are appearing with more frequency; NBC's "Rise," for example, quietly introduces the story of a transgender student taking his first steps in living publicly as a boy, and the writers handle it with care and sincerity. He is becoming what he is meant to be, instead of being introduced as already fully within his identity. That's fertile territory to explore, and it would be wonderful if other series took inspiration from it.

Sunday, meanwhile, gives us a chance to appreciate anew "Brooklyn Nine-Nine" and its confident, jaunty embrace of all the qualities that make the cops in the 99 unique and lovable. A person might even be tempted to characterize it as enlightened — or better, to use that trendy colloquialism that means the same thing. But then I remembered Holt's immediate response to Rosa's truth-sharing.

"I must say, this is going considerably better than when I came out to my colleagues," he tells her. "They were not, as the kids say, awake."

When Andy Samberg's Jake Peralta asks, "Did you mean 'woke'?" Holt replies, "I did mean 'woke,' but it's grammatically incoherent."