A decade and a half later, it's clear there are no winners 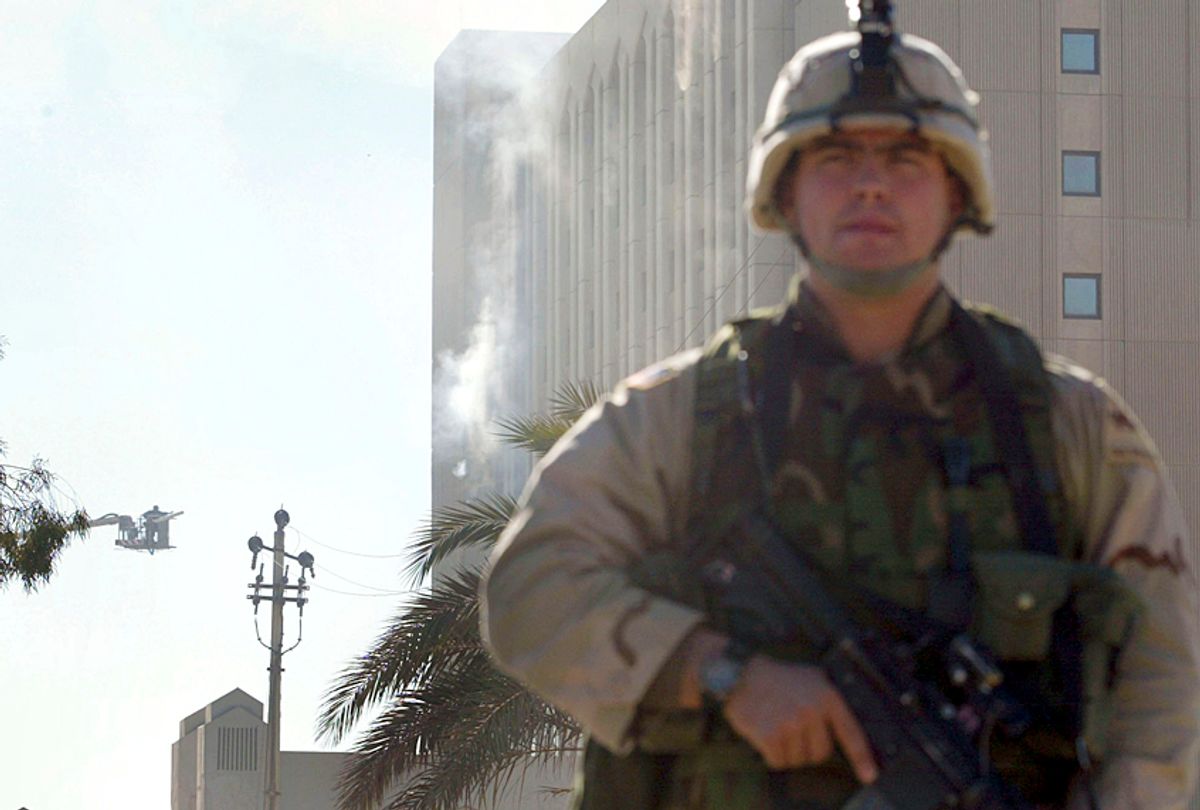 A U.S. Army soldier stands by Iraqi's Oil Ministry after it was hit by missiles, November 21, 2003 in Baghdad, Iraq. (Getty/Joe Raedle)
--

Fifteen years ago, American troops invaded Iraq in the aftermath of the 9/11 terrorist attacks and under the guise that Saddam Hussein was harboring "weapons of mass destruction."

It was George W. Bush's war, but it didn't end when Hussein's government was overthrown. It didn't end when Bush left the White House. It kicked off a wave in the Middle East that became the cornerstone of international politics in the 21st century.

Hundreds of thousands of Iraqi civilians died. The Middle East continues to suffer aftershocks from the war. No weapons of mass destruction were found in Iraq. It's time to reflect on the effects of what happened over the past 15 years.

In The New York Times, Matt Ufford, who served in the Marine Corps from 2000 to 2004, reflected on a war he entered at 24, writing, "We brought war everywhere we went":

The case for the invasion was thin — or rather, it was thick, but, we now know, filled with faulty intelligence, half-truths and a fervor for war that was unsated by the conflict in Afghanistan. Back in the United States, President George W. Bush told the nation on March 19 that it was time to free the people of Iraq and 'defend the world from grave danger.' Within hours, thousands of troops, including my battalion, crossed the border to look for Saddam Hussein’s weapons of mass destruction.

The decision to invade Iraq was itself clearly one of those. The elder George Bush fought a quick and victorious war to drive Saddam Hussein out of Kuwait in 1991. But he stopped short of continuing the war into Iraq to remove Saddam Hussein from power—and so his son learned from that “failure” that he had to finish the job of eliminating Saddam.

Perspectives from Iraqi citizens hardly — if ever, made news during the war's beginnings, but author Sinan Antoon, an Iraqi who has lived in the U.S. since the 1990s and was against Hussein's "reign of terror," wrote for the Times:

In 2002, when the cheerleading for the Iraq war started, I was vehemently against the proposed invasion. The United States had consistently supported dictators in the Arab world and was not in the business of exporting democracy, irrespective of the Bush administration’s slogans. I recalled sitting in my family’s living room with my aunt when I was a teenager, watching Iraqi television and seeing Donald Rumsfeld visiting Baghdad as an emissary from Ronald Reagan and shaking hands with Saddam. That memory made Mr. Rumsfeld’s words in 2002 about freedom and democracy for Iraqis seem hollow. Moreover, having lived through two previous wars (the Iran-Iraq war of 1980 to 1988 and the Gulf War of 1991), I knew that the actual objectives of war were always camouflaged by well-designed lies that exploit collective fear and perpetuate national myths.

And while Bush the younger would take the blame for the war, his decision to invade was worse for humanity than for the president's popularity:

No one knows for certain how many Iraqis have died as a result of the invasion 15 years ago. Some credible estimates put the number at more than one million. You can read that sentence again. The invasion of Iraq is often spoken of in the United States as a “blunder,” or even a “colossal mistake.” It was a crime. Those who perpetrated it are still at large. Some of them have even been rehabilitated thanks to the horrors of Trumpism and a mostly amnesiac citizenry. (A year ago, I watched Mr. Bush on “The Ellen DeGeneres Show,” dancing and talking about his paintings.) The pundits and “experts” who sold us the war still go on doing what they do. I never thought that Iraq could ever be worse than it was during Saddam’s reign, but that is what America’s war achieved and bequeathed to Iraqis.

HuffPost echoed that many Iraqis opposed Hussein, but what has followed is a win for no one:

The U.S. intervention in the Iraq War brought an end to decades of rule by Saddam Hussein that deprived Iraqis of basic rights and subjected many of them to unimaginable suffering. But U.S. policy also emboldened scores of unaccountable militias, worsened the ethnic, sectarian and social fissures the Saddam regime had cultivated and set the stage for the vicious fights over Iraq’s future that continue to this day. Each wave of dramatic change has forced many Iraqis to leave homes, property and ancestral land. Hundreds of thousands have left.

The final death counts are just estimates, but devastating enough. One such study, according to Splinter, suggested there were 500,000 "avoidable deaths" since the Iraq War started. Still, a new poll by Pew Research said 43 percent of Americans continue to agree with the decision to invade Iraq.

With President Donald Trump seemingly ever on the brink of war with North Korea, Iran, whomever — as a society, we've learned far too little from the lessons of the last 15 years.