What the media missed about the West Virginia teachers strike

West Virginia teachers share the lessons from their nine-day walkout 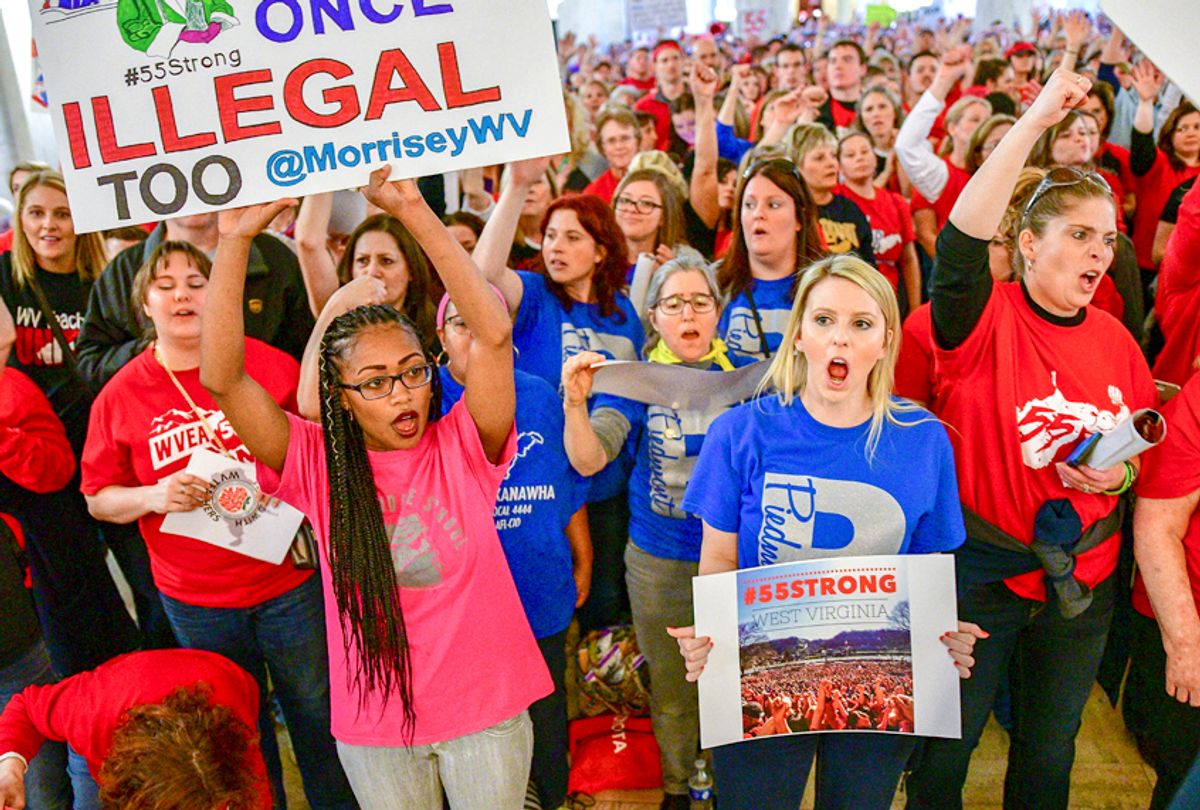 The statewide walkout by teachers that shuttered West Virginia's public schools for nine days garnered an enormous amount of media attention. But the teachers’ demands for more money and a fix to spiraling health care costs were only part of the story.

In the latest episode of the Have You Heard podcast, AlterNet education contributor Jennifer Berkshire and co-host Jack Schneider talk to teachers across West Virginia about why they walked out of their schools, and what they hope teachers in other states will take away from their powerful example.

The following is an edited transcript. Listen to the entire episode.

Have You Heard: What’s the biggest thing that you think the media missed about the West Virginia strike?

Greg Cruey, social studies teacher, Southside Elementary, War, West Virginia: People think that we were out there whining and crying because we wish we had more money. That’s not it. I work in a building with 32 teaching positions and 11 of those positions are vacant. We've got long-term substitutes and we've got people who had been placed on emergency permits and are becoming teachers while they teach. We’ve got a retired personnel director who is 75 or 76 years old, working in a classroom because we can't find somebody else for our vacant math position. We’ve got a guy who is an accountant and he wants one day to be a special ed teacher, but at the moment he's just an accountant working as a substitute teacher and so what we need are highly qualified individuals in these spots, and that's what we have been fighting for. We have been fighting to fill the 720-some-odd vacancies statewide that we don't pay enough to fill.

Have You Heard: The role that the state’s superintendents played in supporting the teachers was also underreported by the media. Talk a little about the nature of that support and why you think it was important.

Brianne Solomon, art and dance teacher, Hannan Junior and Senior High School, Ashton, West Virginia: The support we got was kind of breathtaking. I mean all of our superintendents, every single county, 55 superintendents, went to the capital and locked arms and sat in the Senate gallery and said: "Our teachers aren't going back until they get what they deserve."

Tiphani Davis, 12th-grade English teacher, Morgantown High School, Morgantown, West Virginia: Superintendents have seen that it's more difficult to find qualified people for positions, or they’re having to put in long-term subs or uncertified teachers in the classrooms. And they've seen that they've been asked to do more with less on a yearly basis. And I think that once they became aware that we were unified and that this was actually a movement that was going to happen, essentially a grassroots movement that was created by social media, that they stood next to us.

Have You Heard: Lots of commentators invoked West Virginia’s unique labor history in their coverage, but there were far fewer references to the 1990 teachers' strike. Explain why that strike was so important, and how this one was different.

Heather Holland, third-grade teacher, Hurricane Town Elementary School, Huntington, West Virginia: It's amazing to me, not only that we stayed together as far as teachers and service personnel and state employees, but that we had the support from each and every one of our superintendents in each county. I have some friends who I teach with that they were either part of the strike back in 1990 or they had friends and parents who were part of the strike. Then it was a true strike with picket lines and it was a very difficult time. For us to be able to have the privilege of our superintendents, all 55 of them, saying, 'We're not gonna do that to you all. We’re going to shut down our schools. We're going to make sure our kids were safe. We want you to go do the work that you need to do and then when they hear you, we'll get back to work in the classroom.' It was just really inspiring for them to support us in that way.

Melissa Agee, English teacher, St Alban's High School, St. Alban’s, West Virginia: I was a student in 1990, and we knew that not all the teachers were striking in 1990. We were very aware that some teachers crossed the picket line and we felt that tension among the staff members, especially when we all came back to school. I also felt a little bit betrayed. I was enrolled in two AP classes, and there's a test at the end. There's a pretty significant cost for that test and I had paid that myself out of my pocket. This was about a month before those AP tests, and was a little upset that my AP teachers felt that the strike was more important than teaching me. In retrospect, having understood now the significance of what they were fighting for, it makes a lot more sense. Today, had we not had the support of our superintendents, I would have chosen to stand out on the picket line rather than teach my students.