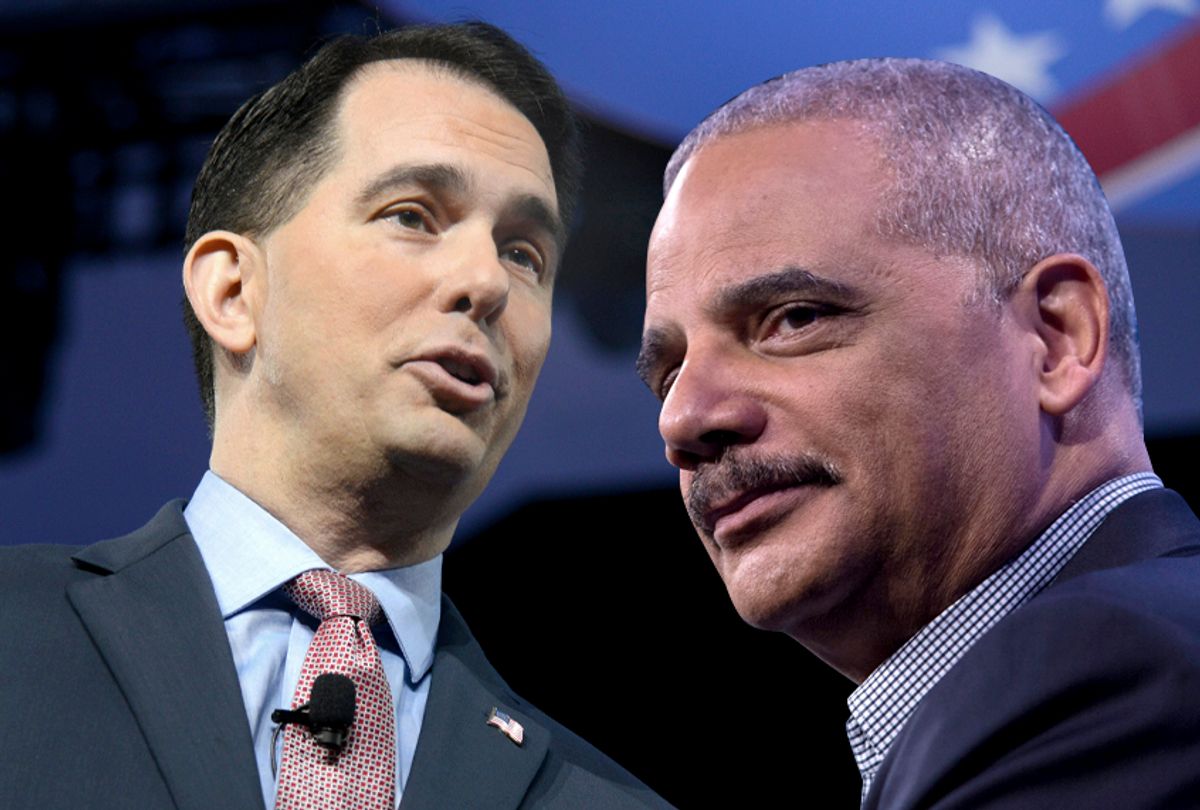 A Dane County Judge issued a writ on Thursday compelling the Wisconsin governor and failed presidential candidate to hold special elections for two legislative seats that became vacant on December 29, when Walker appointed the two elected Republican officeholders to join his administration. According to state law, Walker should have called for a special election to fill “any vacancy in the office of state senator or representative to the Assembly occurring before the 2nd Tuesday in May in the year in which a regular election is held to fill that seat shall be filled as promptly as possible by special election.”

But Walker had rejected calls to hold elections before this year's midterms, after Democrat Patty Schachtner won a January special election upset for a state Senate seat held by Republicans since 2000, in a district that was carried by Trump by 17 points in 2016. A Democrat also won 43 percent of the vote in an overwhelmingly Republican state Assembly district during that same special election.

Walker called the January results a “wake-up call.” The state has since held an election in February and will hold another next month.

Walker has argued, however, that his refusal to hold special elections for the Legislature was about saving the state money, not about suppressing voter representation, noting that the Legislature is set to adjourn in May. The winners of the two races — if held in November, when Walker is up for re-election — would not be seated until January of 2019, meaning voters in those districts will go over a year without representation.

"It's one thing it's vacant, it's another thing they're not going to fill it," said Jennifer Meyer, one of nearly 175,000 people without representation in the Legislature until early 2019 under Walker’s decision. "We have nobody representing the interests of our district in the state Senate right now and that upsets me."

Still, Walker and state Attorney General Brad Schimel contended that because the vacancies occurred in 2017, albeit at the very tail-end, section 8.50 of Wisconsin's state statutes does not technically apply. Democrats note, however, that Walker was happy to call for a January special election in a reliably red district that was also vacated in late 2017. But when a Democrat went on to win the seat in a shocking upset, Walker suddenly changed his tune on special elections.

On Thursday, Judge Josann Reynolds, who was appointed by Walker in 2014, ruled against Walker’s logically inconsistent defense and ordered the governor to schedule special elections within the next 11 weeks. An announcement of the exact date must be made no later than March 29, the judge ordered.

"To state the obvious, if the plaintiffs have a right to vote for their representatives, they must have an election to do so," Reynolds wrote, as reported by the Milwaukee Journal Sentinel. She said Walker’s interpretation of the law “flies in the face of reason,” ‘’violates basic rules of grammar” and would lead to an “absurd result.”

So what does Thursday’s ruling have to do with Eric Holder?

It was the former U.S. attorney general under former president Barack Obama who brought the lawsuit, on behalf of Wisconsin voters  — five voters living in the vacant Assembly district, and three in the vacant state Senate district — against Walker. Holder’s group, The National Democratic Redistricting Committee, was launched last year ahead of the 2020 redistricting process to fight back against rampant GOP election maneuvering.

“This is an important victory for the impacted citizens of Wisconsin who have gone without representation because of Governor Walker’s refusal to call special elections,” Holder said in a statement following Thursday’s unprecedented ruling. The former attorney general traveled to Wisconsin earlier this month to campaign for a Milwaukee County judge who is running for an open state Supreme Court seat.

Walker has not said whether he will immediately call special elections, as ordered by the judge. Walker's spokesperson Amy Hasenberg told the Associated Press that the governor was discussing next steps with Department of Justice attorneys.

The vacant Wisconsin seats were held by Republican Sen. Frank Lasee, whose seat has been under Republican control for the past 40 years, and Rep. Keith Ripp, who had been in his rural seat north of Madison since 2008. The open state Senate seat south of Green Bay gave Trump an 18-point margin over rival Hillary Clinton in 2016, while the open Assembly district north of Madison gave Trump a 14-point margin.

Holder, whose group has taken up the unusual tack of using the courts to compel Republican leaders to hold fair and timely elections, said on Thursday that “Governor Walker’s actions have undermined that right and it should never have taken legal action to force him to do his job.” But Walker is hardly the only state executive blocking access to the ballot box.

Michigan’s Republican Gov. Rick Snyder is facing controversy for his decision to wait until the November election to replace former Democratic congressman John Conyers, who resigned back in December. Snyder’s refusal to hold a special election forces constituents in the Detroit district to go 11 months without representation in Congress. Snyder has also refused to hold a special election to replace Democratic Michigan State Sen. Bert Johnson, who resigned after pleading guilty to corruption charges.