In a rebuff of the Education Department's leader, Congress' spending bill diverged from DeVos' privatized dreams 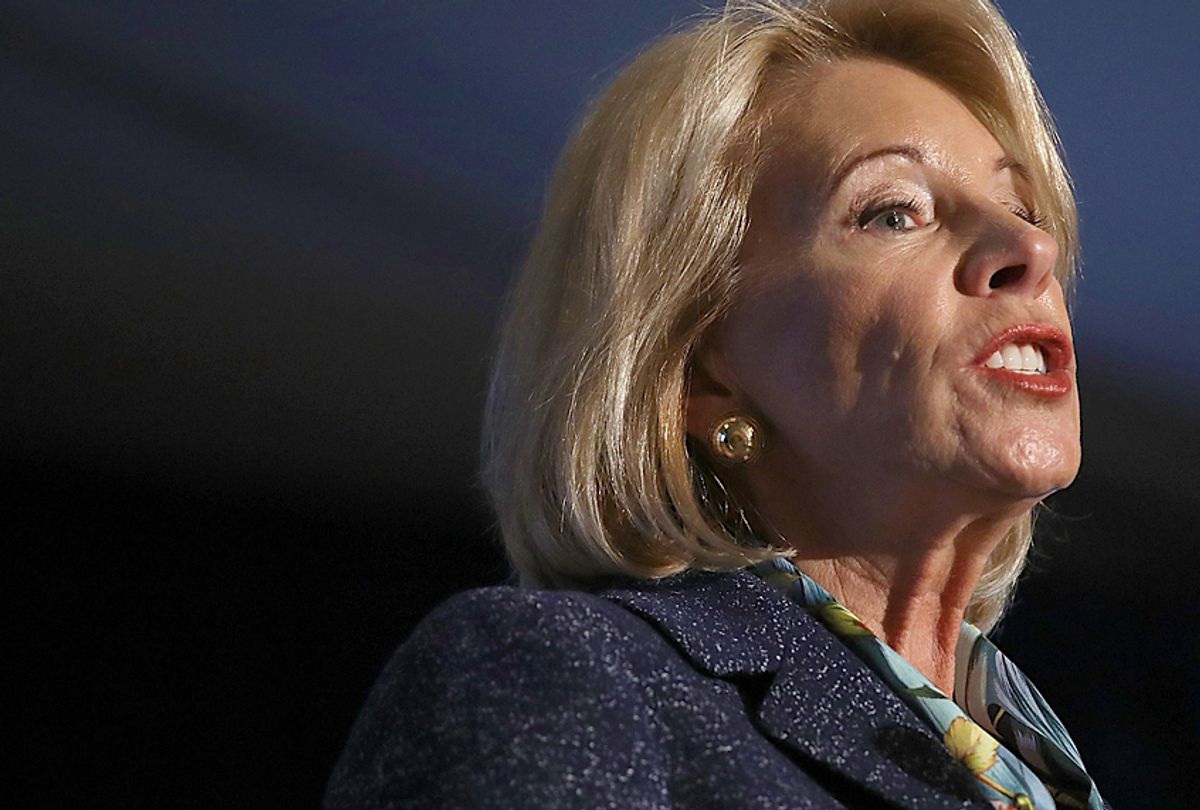 Education Secretary Betsy DeVos and Congress are on completely different pages when it comes to the country's education agenda.

For the second consecutive year, Congress has rejected funding for DeVos' key policy proposals, which most notably included reduced federal funding for public schools and an effort to spend $1 billion promoting school-choice programs.

DeVos had planned to slash the Department of Education's budget by $3.6 billion (5 percent), but on Wednesday night, Congress included a $3.9 billion increase to the department in the massive $1.3 trillion omnibus spending bill, according to The Washington Post. The legislation must be passed by midnight on Friday in order to keep the government running.

There was no funding included for the school-choice proposals made by DeVos.

"After more than a year on the job, I would have hoped Secretary DeVos would have learned by now that her extreme ideas to privatize our nation’s public schools and dismantle the Department of Education do not have support among parents or in Congress, but unfortunately that does not seem to be the case," said Sen. Patty Murray, D-Wash., according to the Post.

She added, "I’m proud to have worked with Republicans in Congress to flatly reject these ideas, and increase funding for programs Secretary DeVos tried to cut, including K-12 education, civil rights protections, college affordability, and more."

Murray serves as a ranking Democrat on the Health, Education, Labor and Pensions Committee.

Indeed, DeVos' vision for the department was vastly different than what Congress had in mind, and several programs she intended to eliminate directly contradicted what made it into the bill.

Among other cuts, she [DeVos] wanted to eliminate funding for after-school programs for needy youth and ax a grant program that helps low-income students go to college in favor of spending more than $1 billion to promote charter schools, magnet schools and private school vouchers. Her proposal also outlined cuts to the Office for Civil Rights because the office had grown more efficient, she said, a move that outraged Democrats and civil rights groups.

Instead, Congress is on track to increase department funding by $3.9 billion, with no funding for the school choice program DeVos envisioned. The spending bill, which must be passed by Friday to avoid another government shutdown, boosts investments in student mental health, including increasing funding by $700 million for a wide-ranging grant program that schools can use for counselors. The bill calls for an additional $22 million for a program to reduce school violence and $25 million for a Department of Health and Human Services program that supports mental-health services in schools.

Another $40 million would be put towards a Washington, D.C. tuition assistance program that provides city high school students with "affordable college options," the Post noted. The bill also included an increase in funds for the Office for Civil Rights as well as after-school programs.

DeVos was grilled by Rep. Barbara Lee, D-Calif., earlier this week and was unable to answer questions on the issue of institutional racism. Lee said DeVos's proposals were "a slap in the face."

DeVos had also proposed to slash the $732 million Federal Supplemental Educational Opportunity Grant, of which 71 percent of its recipients are from households that make under $30,000 annually, the Post noted. Democrats and Republicans decided instead to increase the grant's funding by $107 million.

The differences between Congress' omnibus spending bill and DeVos's budget proposals represent an astounding indictment of her leadership of the Education Department. Congress is perhaps more gridlocked than ever before, but lawmakers from both parties have practically dismissed DeVos's intended plans.

In the wake of DeVos's abysmal "60 Minutes" interview, it's clear that the Trump administration has a radical transformation in mind for the Education Department. Meanwhile, the public has largely decried funding cuts, and even members of Congress were able to see that to some degree.