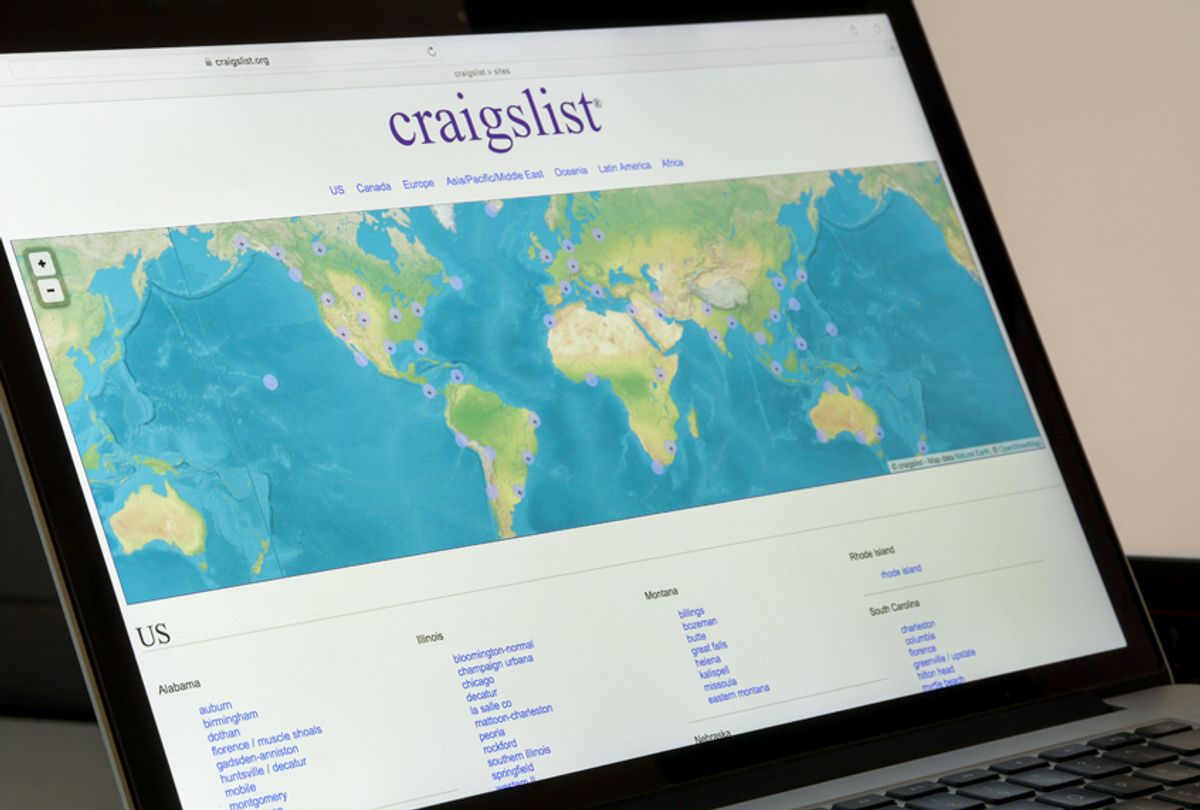 It’s the end of an era for those who have leaned on Craigslist to meet romantic, platonic, and sexual partners. The online classified ads site founded in 1995 closed its personal ads section this week — and yes, that includes its legendary "casual encounters" listings and same-sex ads —"m4m" and "w4w" in Craigslist parlance.

While the subsections are still listed under “personals,” the site is now redirecting users to the following message:

Any tool or service can be misused. We can't take such risk without jeopardizing all our other services, so we are regretfully taking craigslist personals offline. Hopefully we can bring them back some day.

To the millions of spouses, partners, and couples who met through craigslist, we wish you every happiness!

The aforementioned bill, H.R.1865, entitled "Allow States and Victims to Fight Online Sex Trafficking Act of 2017” passed the Senate on March 21 and is currently awaiting President Donald Trump’s signature. Commonly referred to as FOSTA, the bill amends section 230 of the Communications Act of 1934 (which prevents platforms like Facebook from being held liable in situations of harassment, hate speech, cyberbullying, etc.), to make websites criminally liable for knowingly hosting, assisting, supporting, or facilitating sex trafficking.

The Internet Association called the bill “overly broad” and “counterproductive” in the campaign to fight human trafficking.

"While not the intention of the bill, it would create a new wave of frivolous and unpredictable actions against legitimate companies rather than addressing underlying criminal behavior,” Internet Association President and CEO Michael Beckerman said in a statement in August 2017.

The bill was sponsored by Rep. Ann Wagner, R-Mo., but is considered to be a bipartisan bill.

The purpose of the Craigslist personal ads section was never explicitly to facilitate sex trafficking and prostitution, but as often happens in an open and unregulated market, some of that inevitably made its way into Craigslist's system. In 2010, Craigslist made headlines when journalists discovered that women were reportedly being prostituted by pimps to answer personal ads on Craigslist. This was shortly after the "Craigslist murder," so named when Philip Markoff killed a woman he met in the personal connections section whom he was supposed to receive a massage from.

Critics of the bill also fear it will put sex workers in more dangerous positions. As Alana Massey thoughtfully wrote in Allure, in regards to FOSTA and its sister bill SESTA (the Stop Enabling Sex Traffickers Act of 2017): “The problem is that these bills target websites that are widely and inaccurately believed to be hubs of trafficking activity when it is precisely those websites that enable people in the sex trades to do their work safely and independently, at the same time as they make it easier for authorities to find and investigate possible trafficking cases.”

On the other hand, there is more contention over the impact that the end of Craigslist's personals will have on the LGBTQ community. Conservative gay writer Chad Felix Greene claimed the closure of Craigslist's personal ads is a "pro-LGBT life-saving measure," noting that there had been reports of gay men being killed from casual encounters on Craigslist.

Still, others argue vigorously that Craigslist personal ads did provide a safe space for the LGBTQ community seeking love and connection.

The majority of lawmakers have conservative views on sex and especially sex work; hence, it remains to be seen whether Congress will react to criticism of FOSTA.