After 15 years of disaster in Iraq, bomb-crazed loon John Bolton is back — and we deserve him

John Bolton lied us into the Iraq War, and promised it would be easy and fun. What shock-and-awe has he got next? 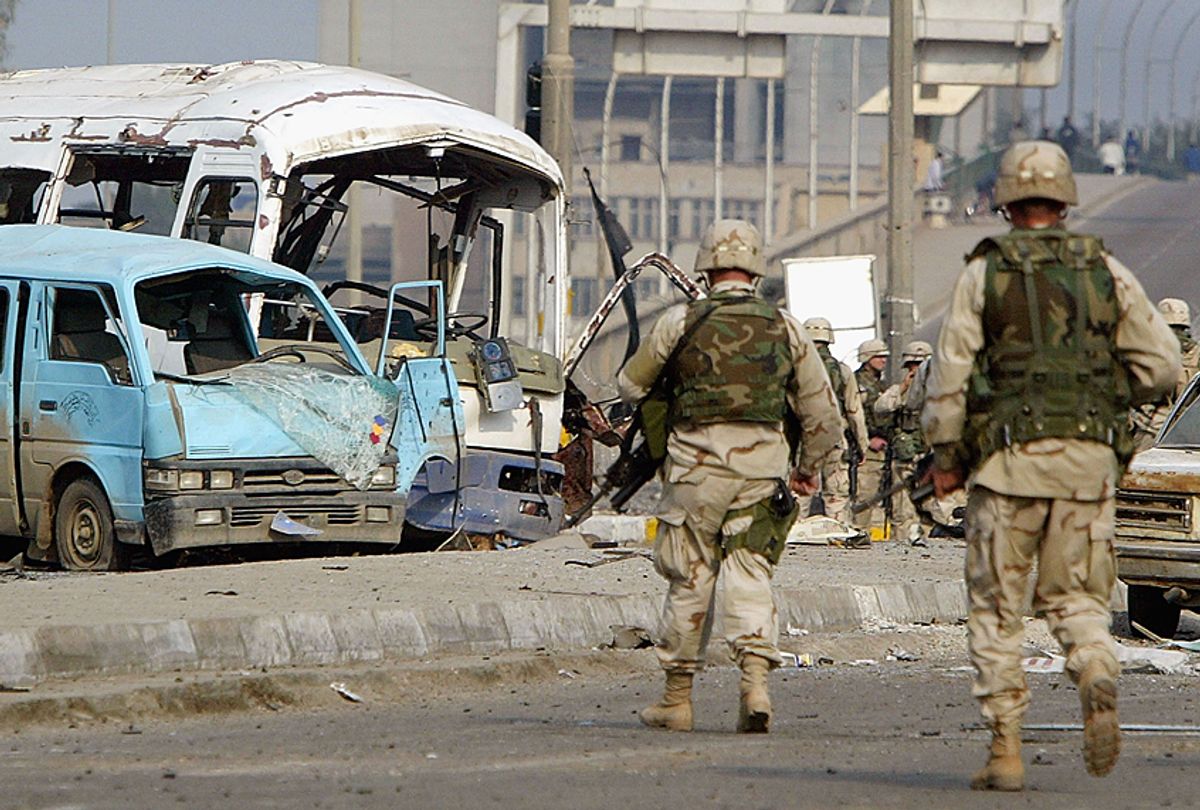 US Army soldiers investigate the site of an explosion, January 18, 2004 in Baghdad, Iraq (Getty/Mario Tama)
--

Whatever happened to consequences? Remember the idea that if you fucked something up, you paid a price for it? Where’d that go? It sure went missing this week when President I-Can-do-Any-Damn-Thing-I-Want named John Bolton as his new national security adviser.

What a time he picked to do it. Fifteen years ago this week we invaded Iraq – maybe the stupidest, most expensive and most certifiably insane thing any modern nation has ever done. John Bolton was one of that misbegotten war’s biggest cheerleaders. He was right there on the front lines of the so-called “debate” over Iraq with fellow Barcalounger boy-warriors like Paul Wolfowitz and Douglas Feith, the architects of the war and authors of the famed “shock and awe” doctrine that was supposed to get us in and out in something like six months. It was the war that would “pay for itself,” remember? Bolton stood with the rest of the Republican geniuses who figured that invading Iraq was just a peachy way to “bring democracy to the Middle East,” or some such crap.

“We are confident that Saddam Hussein has hidden weapons of mass destruction and production facilities in Iraq,” Bolton said in the run-up to the war in 2002 when he was undersecretary of state for arms control and international security. How’d that work out, Johnny? Had a look at your handiwork lately? I thought not.

Remember the whole “yellow-cake uranium” thing? Bolton was one of the hawks who encouraged George W. Bush to include in his 2003 State of the Union the allegation that Saddam had tried to procure yellow-cake uranium from the African country of Niger. That charge was based on a bunch of forged documents and roundly debunked by former ambassador Joe Wilson, who was dispatched to Niger to investigate the claim. When Wilson wrote an Op-Ed shooting down the yellow-cake nonsense, one of Vice President Dick Cheney’s factotums outed Wilson wife, Valerie Plame, as an undercover CIA officer, starting a controversy that has lasted almost as long as the Iraq War itself. Bolton was right there with the “mushroom cloud” crowd, warning that Saddam was going to wipe us off the face of the earth if we didn’t take him out in the next 15 minutes.

Gee, that sounds kind of familiar, doesn’t it? Well, what do you know: Bolton was back rattling his little sabers last month in the Wall Street Journal, gracing those august pages with an unhinged screed called “The Case for Striking North Korea First.” Back in 2015, he was in the New York Times with some more brilliant advice: “To Stop Iran’s Bomb, Bomb Iran.” Lovely, huh? Nukes for breakfast, nukes for lunch, nukes for dinner, nukes for a goddamn midnight snack. The guy who used to be in charge of nuclear disarmament for the State Department figures that the best way to get rid of nukes is to find a target and blow them up.

Well, we all know what happened when Bolton, Wolfowitz, Cheney, Bush and Rumsfeld decided that blowing stuff up was a good idea the last time, don’t we? With Trump threatening to scrap the Iran nuclear deal in May, maybe it’s time to turn the clock back 15 years and have a look.

On the night of March 20, 2003, American stealth bombers launched what became known as a campaign of “shock and awe” against targets in Baghdad.  CNN had a camera on the roof of the Palestine Hotel, across the Tigris River from Saddam’s presidential palace. The idea behind the shock-and-awe bombing was that the Iraqis would be so intimidated by this display of American military might they would just throw down their arms and welcome us as liberators. I remember watching the bombing on the TV in my kitchen. BOOM! There goes another one! The TV talking heads were so excited, they were calling it like we were dropping three-pointers in a Final Four game.

There was just one teensie little problem. The CNN camera on the hotel rooftop was using a wide angle lens so they wouldn’t miss any of the explosions across the river. But not only did the camera see a wide area to the left and right, it also picked up the street down along the Tigris in front of the hotel. As I watched the bombs fall, I could see BMWs and Mercedes sedans driving by, headlights on. The landed gentry of Baghdad were on their way home from dinner, and they weren’t even speeding! They were just cruising by, probably slowing down to watch the show across the river, just like we were.

We were dropping “smart bombs” on Saddam’s military buildings, and the Iraqis knew it. They weren’t going to get hit by our bombs. They were about as shocked and awed as I was.

Given the fact that we’d been over there in Kuwait for nearly a year building up our forces for invasion, the Iraqis were ready for us. I don’t know that we ever got a casualty count for that night’s bombing campaign, but I’d be willing to bet it was zero, or close to it. Saddam and his minions had moved out of their palaces and offices.

Later that year, I was in Baghdad on assignment, and I walked around what became known as the Green Zone, the area along the Tigris where Saddam had his presidential palace and most of the buildings for his government – all except the oil ministry headquarters, which was some miles away near Sadr City.  And what do you know: We had leveled his defense ministry and the Republican Guard headquarters and a passel of other government buildings, but we spared the oil building! I wonder why, don’t you?

Most of the government buildings in the Green Zone were rubble, but I’ll be damned! Somehow we missed the presidential palace, where the “Coalition Provisional Authority” had set up its headquarters. And we missed all of the other Saddam mini-palaces near it along the river, like the one I was staying in, a lovely little 40-room mansion built for some Saddam cousin or other, now occupied by a U.S. Army civil affairs battalion. So our “smart bombs” took out the shit we didn’t want and left the oil ministry and the palaces.

There are unnerving similarities between then and now. Fifteen years ago, Republicans pushed through no less than two huge tax cuts at the same time we were planning for and then going to war: the Economic Growth and Tax Relief Reconciliation Act of 2001 and the Jobs and Growth Tax Relief Reconciliation Act of 2003, which added some $1.5 trillion to the deficit. It was the first time in our nation’s history that at the same time we were sending our young men and women thousands of miles away to die, we were cutting taxes for millionaires and billionaires.

Bomb ‘em Bolton will fit right in at the White House, because Trump and his Republican buddies just rammed through another huge tax cut for millionaires and billionaires called -- wait for it -- The Tax Cuts and Jobs Act.  They threw another $1.5 trillion at their rich buddies even as we have several thousand soldiers in Iraq and – get this – Syria, not to mention more than 11,000 still carrying rifles in Afghanistan, around 800 in Niger, 25,000 in Korea, 4,000 in Djibouti, 10,000 in Italy, 35,000 in Germany, 11,000 in Qatar and who knows how many we don't quite know about.

You get the picture. We’ve got something like 200,000 members of our military deployed overseas, many of them in harm’s way, and once again we’re cutting taxes and bringing into the White House certifiable bomb-crazy loons like John Bolton.

Whatever happened to consequences? Doesn’t it count if you lied us into one of the longest, most wasteful and most insane wars in our history? Doesn’t it matter if you’ve got the blood of 4,500 young Americans on your hands? Isn’t there a price to pay for screwing up on that scale?

Apparently not, to the man who went around the country for a year screaming at the top of his lungs that he wasn’t going to get us in “any more stupid wars.” He’s got new uses for shock ‘n' awe. Don’t pay attention to all those Russians they’re finding under the carpet at Trump Tower! Don’t look at damn Playboy bunnies and strippers! Look over there: John Bolton knows how to make America great again!