Whatever Trump, Joe diGenova and Jay Sekulow are planning with Dowd off the team, things are about to get ugly 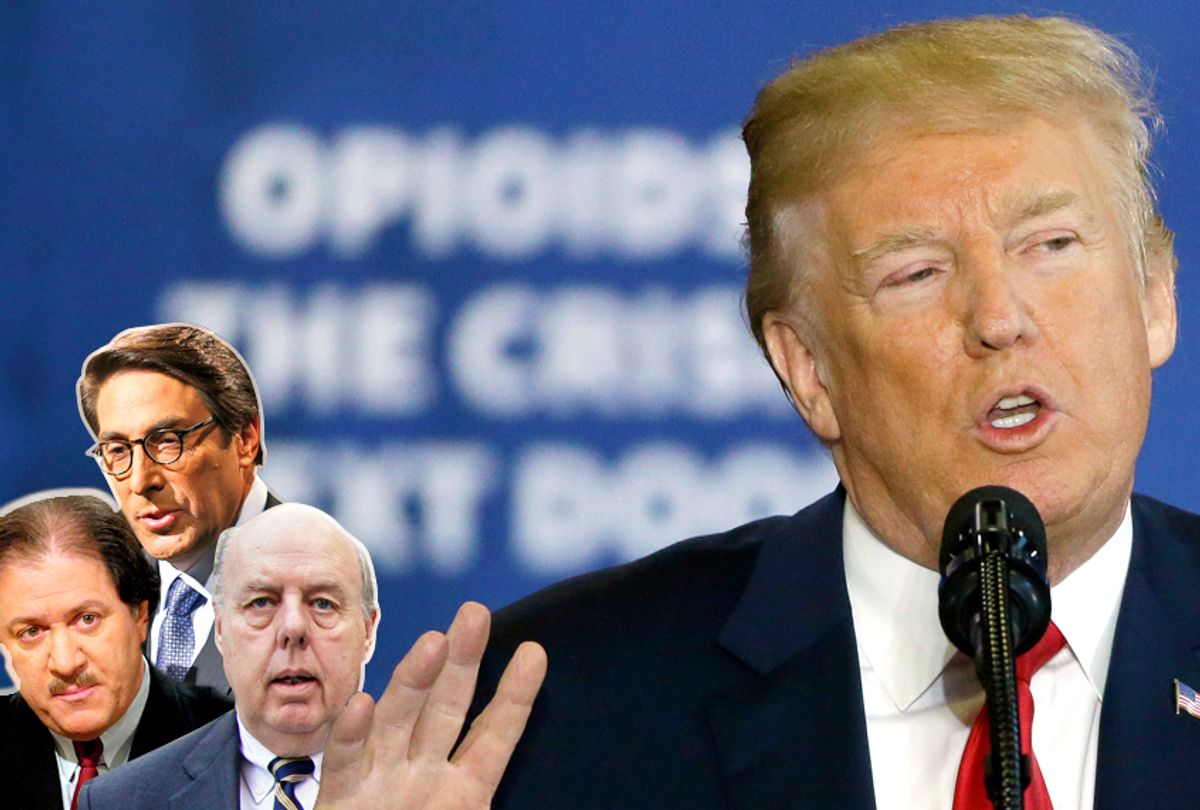 The old saying that a man who is his own lawyer has a fool for a client was uttered all day long on cable news late this week, and for good reason. President Trump's lead personal lawyer, John Dowd, announced his resignation on Thursday, and all the speculation among those with contacts in TrumpWorld is that the president is now taking his legal strategy into his own hands.

Trump has reportedly been unhappy with his legal team, largely because they repeatedly (and foolishly) promised him that special counsel Robert Mueller's probe of the 2016 Trump campaign, and ancillary matters, would be wound up by now. Of course, Trump also presumably assured his lawyers that he was innocent of all wrongdoing. Evidently Dowd was the man Trump depended on to negotiate with Mueller's office, and Trump wasn't happy to learn that Mueller wants to interview him about obstruction of justice, which the president likes to call "fighting back." Others with insights into Trump's inner circle have speculated that Dowd was to leave, either because his client won't listen to his advice or because Trump had hired political hitman and TV lawyer Joe diGenova, and Dowd wanted no part of whatever they have planned.

It appears that diGenova plans to concentrate on a PR campaign aimed at diverting attention onto some separate line of investigation into Hillary Clinton and the FBI, along with a full-court press aimed at muddying Robert Mueller's reputation. While diGenova certainly has experience in high-stakes partisan TV wrestling, he's likely way over his head when it comes to dealing with a complicated counterintelligence investigation. It's not clear how any of this is supposed to clear the president's name, but it's apparently what Trump considers "counterpunching."

It's his style to attack and divert. According to Gabriel Sherman at Vanity Fair, the president has been chomping at the bit ever since Mueller's office issued a subpoena for Trump Organization documents:

In the days since Mueller issued the subpoena, Trump has been on the attack. Last Saturday, Trump encouraged Dowd to call for an end to the Russia probe, a source told me. ... Trump’s new offensive is a sign that he’s unilaterally abandoning the go-along, get-along strategy advocated by Dowd and Ty Cobb, the White House lawyer overseeing the response to Mueller. ... “Trump is looking at this saying, I did it your way for months, now I’m fucking doing it my way,” a former West Wing official said. (The White House did not respond to a request for comment.)

In private, Trump friends and outside advisers have been stoking his desire to go on the offensive for months. Trump has heard that his lawyers are “idiots”; that Mueller’s probe is a “coup d’état”; and that Trump’s only crime is having “won the election.”

This account lends credence to the idea that Trump is no longer interested in playing by any of the rules, not even the rule of law.

After all, Dowd was in many ways the perfect lawyer for Trump in this matter. He has a ton of experience in Washington and knows his way around politics and the federal law enforcement bureaucracy. And he's got the kind of rough-and-tumble personality that Trump likes.

Reuters published a profile of Dowd when he was hired with the headline, "Tough-talking Trump defense lawyer says he's no 'snowflake' and he isn't." They characterized his style as a mirror of the president's -- "a no-holds-barred, hyperbolic style and a history of attacking prosecutors, congressional Democrats and the media." He told the news agency, “I fight hard, I believe that’s what I’m supposed to do." And he has done that.

This is a man who almost certainly lied when he took the blame for tweeting on the president's Twitter account that he had fired Michael Flynn for lying to the FBI, which put the president in serious legal danger. (Remember that the stated original reason for firing Flynn was because he had lied to Mike Pence.) Just last weekend, Dowd went out on a limb with a statement to Betsy Woodruff of the Daily Beast saying he "prayed" that Deputy Attorney General Rod Rosenstein would follow the "brilliant and courageous" example of Jeff Sessions and end the Russia investigation "manufactured by McCabe's boss James Comey based upon a fraudulent and corrupt Dossier." (If that statement was not literally scripted by Trump, it's a brilliant imitation of his rhetorical style.)

According to Woodruff, Dowd specifically said that he was speaking on behalf of the president, only to later reverse course and claim he was only speaking for himself. It may be that Dowd belatedly realized that the statement strongly implied that Sessions' decision to fire former deputy FBI director Andrew McCabe was connected to the Mueller probe, leading to a reasonable conclusion that Trump was admitting to collusion with the Department of Justice in the matter. Trump was reportedly infuriated that Dowd walked back the statement, apparently seeing that as a sign of weakness -- or, just as likely, he wanted everyone to understand that he was directing the whole thing from the White House.

However much of a crude scrapper Dowd might be, there is no evidence that he would knowingly break the law or violate the Constitution. So perhaps Trump and his new team are getting ready to "fight back" in ways that even the combative Dowd was unwilling to countenance. It's certainly possible that Dowd reflected on whether he wanted to be part of a "legal team" that included Christian activist Jay Sekulow and right-wing operative diGenova, both of whom are frequent bloviators on Fox News. Perhaps he doesn't think Sean Hannity's green room is the right environment for hatching a legal defense.

At this point Trump seems likely to fire Sessions, Rosenstein and/or Mueller sooner rather than later. It was reported late on Thursday that he had also hired diGenova's wife and law partner, Victoria Toensing, another professional right-wing TV character assassin. It's also rumored that Trump may bring back his longtime personal lawyer Marc Kasowitz, the man who had to resign early in the president's term for emailing a reporter, "Watch your back, bitch." Such sensitivities seem rather quaint now.

Trump is no longer negotiating or mounting a legal defense. It's all-out war.