How you got screwed by the education system 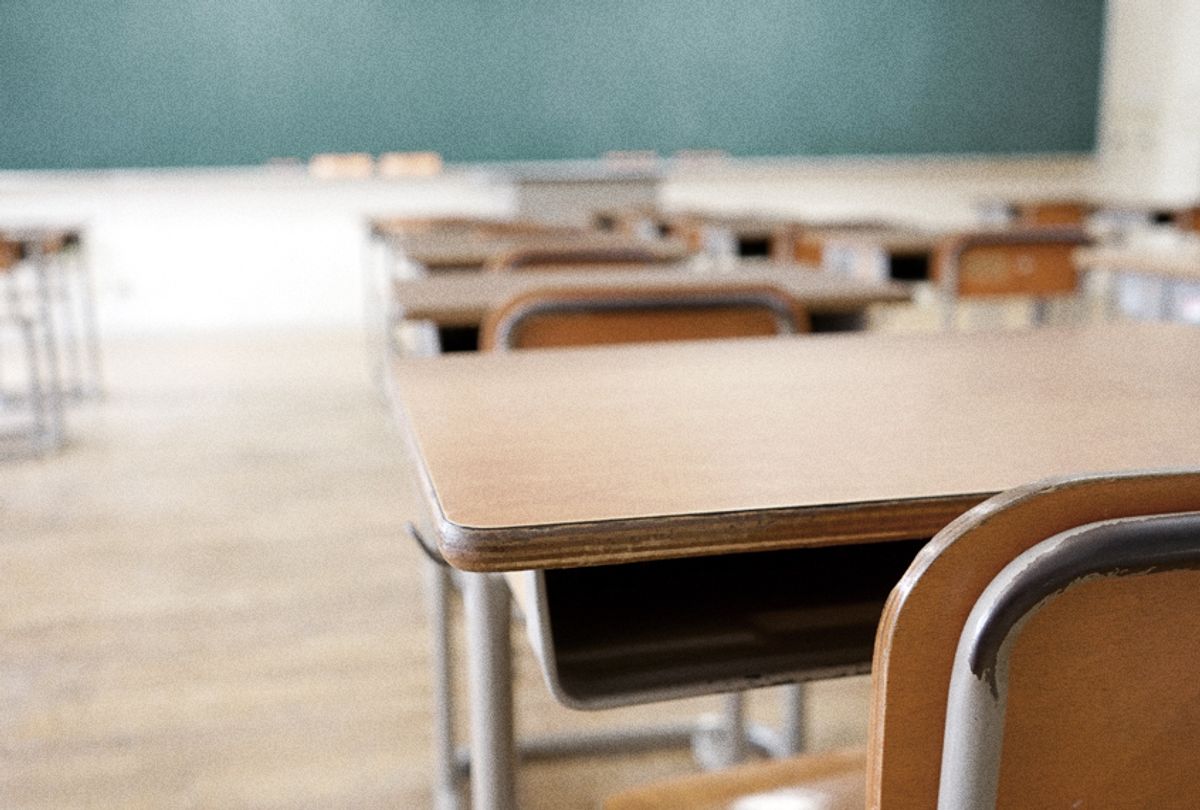 Schools teach exactly what they are intended to teach and they do it well: How to be a good Egyptian and remain in your place in the pyramid. —John Taylor Gatto, "Dumbing Us Down"

At one time, the education system in this country served to bring a nation together with a common culture and to prepare them to take on the responsibilities of adulthood. But today, the public schools have lost their purpose, an example of form over function, while higher edu­cation leaves you deep in debt and unprepared for the future.

Most people would say no to those questions. The obvious question, then, is why not? We know for a fact that every single person who goes from kindergarten through grade 12 is going to become an adult who will need to live independently and proba­bly start a career. Wouldn’t you think that the whole point of school would be to prepare people for what we absolutely know is going to happen?

When the public school system was created, it had a clear dual purpose: Give a nation of unskilled immigrants a shared identity as Americans, and give them the basic skills they needed to succeed in the workplace.

However, as Neil Postman noted in "The End of Education: Redefining the Value of School," our current school model has not had a sense of purpose for some time. We have abandoned our shared narrative as Americans—we are no longer building a public. And we no longer focus on building practical life and work skills, save for a narrow band of instruction focused on career and technical education. As Scott London notes in his review of Postman’s book, “At the moment, he says, education is geared toward economic utility, consumerism, technology, mul­ticulturalism, and other bogus objectives. Narratives such as these are incapable of providing a rich and sustaining rationale for public education.”

COMMON CORE, AND OTHER MISGUIDED REFORMS

When a system doesn’t have a purpose (or ignores what should be its purpose), then you can come up with lots of false goals to tar­get, and lots of false solutions to “help.” Common Core is one of those false solutions: It was written at the urging of big business (Bill Gates173 was key here), run through the National Gover­nors Association to give it respectability, and forced on schools across the country by Arne Duncan.

There were only five people involved in writing the stan­dards; none were classroom teachers, and two had never done standards work before. There were sixty participants on the review committees, only one of whom was a practicing class­room teacher. Two on that committee, Dr. Sandra Stotsky (lan­guage arts) and Dr. James Milgram (math), have refused to endorse the finished product and have in fact written and testi­fied against those standards repeatedly. And analysis after the fact shows that the standards do not prepare students for STEM, nor do they make them college and career ready.

And yet, due to the political pressure of the National Gover­nors Association and funding incentives from the Department of Education, almost all states adopted the new standards (though some have backed away due to parent pushback). Note that they had never been tried out anywhere: We forced a new set of learn­ing standards on more than 50 million children without any proof at all that they had value. This is just one example of the kind of wrong-headed and even damaging reform that comes from not having a clear purpose.

Almost all high school students are told that success in life requires a four-year college degree. For many of them, that’s really bad advice.

The idea, like most in education, started with good inten­tions: College graduates tend to earn more, and have a lower unemployment rate, than those who don’t have a college degree. But to say that everyone should get a degree, and will then enjoy those advantages, is just flawed logic.

Second, while more and more jobs require degrees, they’re not necessarily four-year degrees. Lots of jobs, particularly hands-on jobs, require two year degrees or certifications, both of which cost a lot less and still lead to jobs that pay well and have a lot of job security. Examples include diagnostic medical sonogra­pher (median annual salary: $64,280), paralegal ($49,500), respi­ratory therapist ($58,670), and electrician ($52,720). And finally, in high-poverty communities where many students are struggling with basic skills, imposing a college-prep curriculum almost guarantees poor outcomes, like high dropout rates, with­out actually increasing the number of poor students who get a college degree. In fact, only eight percent of low-income chil­dren in America earn a bachelor’s degree by their mid-twenties, compared to more than 80 percent of students from the top income quartile.

A lot of people consider education, particularly college educa­tion, to be an investment in your future. That may or may not be true; but what we do know is that this investment has gotten more and more expensive over the years.

According to official sources, the cost of attending a four-year public college went up 250 percent between 1982 and 2012; that number, with inflation, is nearly 600 percent! 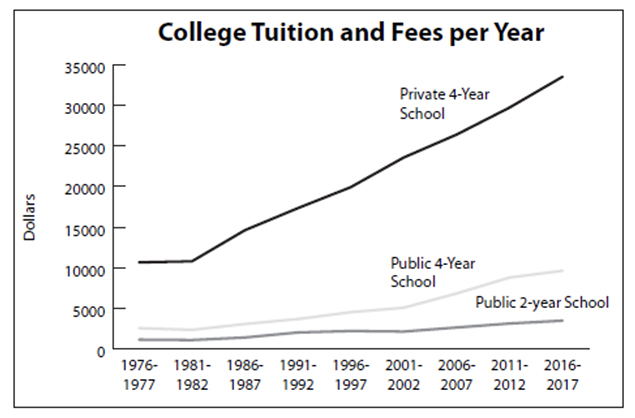 There’s no one reason for this; rather there are a lot of con­tributing factors, like increasing demand for seats, increased ser­vices from colleges, reduced public funding for colleges, and freely-available student loans (more on that in the next section). But regardless of the reason or reasons, the fact that college costs have gone up so much, when incomes and job prospects have not, means that a lot of people will be getting degrees that won’t ben­efit them, coupled with a heavy debt burden they will carry for years.

With college prices going up so fast, and family incomes not keeping pace, there was no way that most families could save up enough money to cover those costs themselves. That’s where stu­dent loans come in.

Student loans have continued to grow quickly; today people owe more than $1.3 trillion in student loans as shown in the chart below, which works out to an average debt of $29,000. 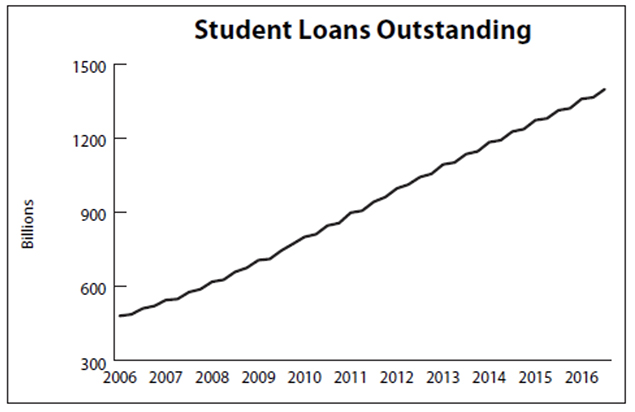 This causes all kinds of problems. First, one in four of those loan holders is struggling to make their payments or are already in default. And those loans weigh heavily on the economy as a whole: They’ve been noted as a reason for the reduced number of business startups, lower levels of home ownership, marrying later in life, and postponing the decision to have children.

And the kicker? Thanks to lobbying by the financial indus­try, congress passed “The Bankruptcy Abuse Prevention and Consumer Protection Act,” which says that you can’t get rid of student loan debt through bankruptcy. Once you take out a student loan, you’ll either pay it back or carry that debt forever.

For-profit colleges have been around since Colonial times, and had such early advocates as Benjamin Franklin. But when John Sperling opened the University of Phoenix in 1976, his uncon­ventional model, which included course credit for work experi­ence and, in 1989, an early and aggressive move to online learning, allowed for rapid growth. Within five years of going public (in 1994), the school had a hundred thousand enrollees. Other for-profit schools, seeing Phoenix’s success, began to go public as well.

For many of these schools, the rapid growth required of pub­lic companies quickly resulted in compromised quality and hard-sell enrollment efforts. Degrees from these colleges, even those with national accreditation, are not always considered credible with employers, and in many cases leave students inel­igible to pursue industry certifications, despite glowing promises about industry placement rates and the promise of high-paying jobs. And they use aggressive marketing tactics particularly tar­geted at vulnerable populations and people exiting the military, who are particularly attractive targets because the G.I. Bill still allows funds to be used at these colleges.

While not all for-profit colleges are deceptive—some of the worst actors have been shut down in recent years, and federal funding guidelines have been tightened to reduce the incentive for fraud—anyone seeking an education should do a great deal of due diligence before committing their time and money to one of these schools.

Whether at the secondary or postsecondary levels, the true purpose of the American education system seems to be to make sure children are unprepared for the adult world—and to charge them huge sums for the privilege.

Excerpted with permission from "How You Got Screwed: What Big Banks, Big Government, and Big Businesses Don’t Want You to Know—and What You Can Do About It" by Allen Marshall. Copyright 2018 by Skyhorse Publishing, Inc. Available for purchase from Amazon, Barnes & Noble, and Indiebound.