Will John Bolton ruin the chances for peace on the Korean peninsula? 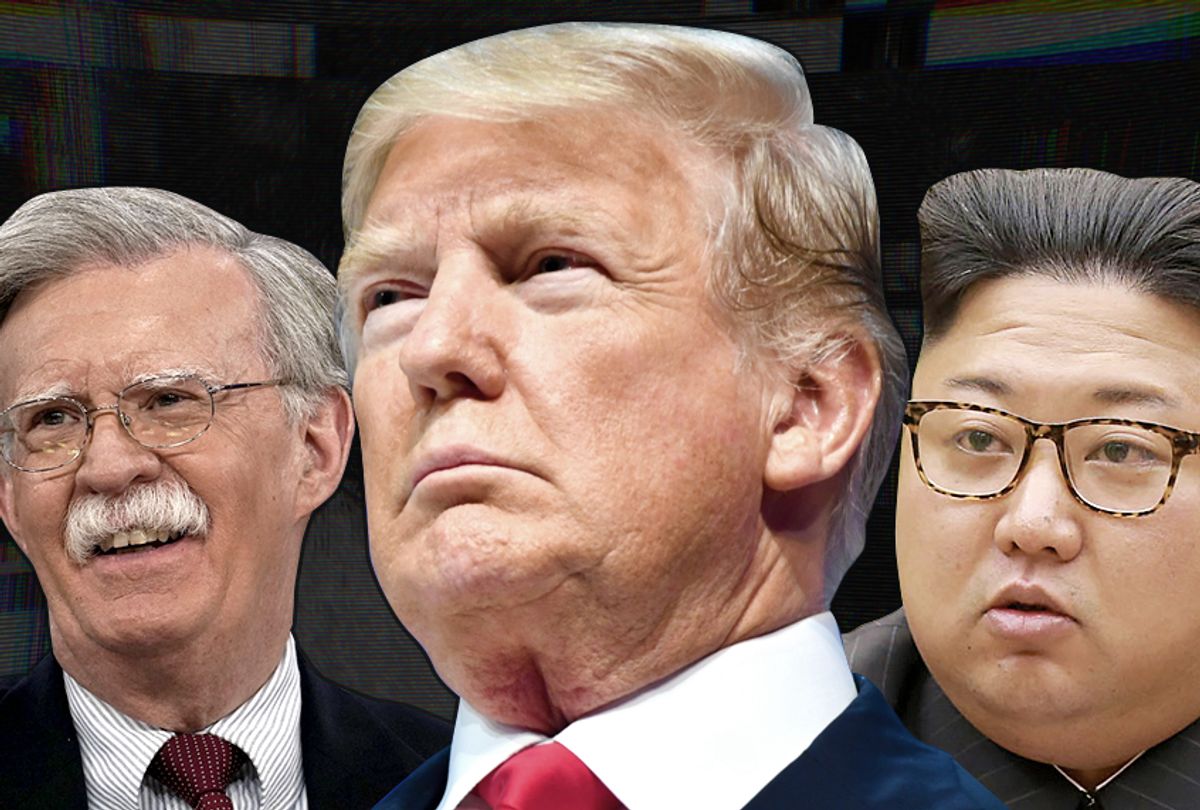 Korea now gets more kinetic by the day and deserves the close attention of anyone curious to know what it is like to live with one less threat of nuclear conflict. Let’s stay well clear of “We believe peace is at hand,” the phrase Henry Kissinger discredited when he (in)famously dropped the thought on voters during Richard Nixon’s 1972 re-election campaign. But a settlement on the Korean Peninsula could be a short distance over the horizon, and it is the first time in decades one can say that.

It is the season of summits in Northeast Asia. Four are now planned or proposed for this spring — all intended to explore the potential for denuclearization and, if this is realized, an opening to a lot more. Here is the diplomatic agenda:

The tilt in the news reports and editorials thus far is that Moon has already assumed big risks and Trump takes more in consenting to meet with North Korea’s youthful leader. I do not see this. For reasons not widely reported, the chances of success are as good as those of failure — if not somewhat better.

If Moon manages to keep Trump and Kim on board, the winners could far outnumber the losers by spring’s end. The latter consist of domestic hawks in various of the nations engaged on the Korea question. But none of these is politically ascendant, with one exception: Hardliners in the Pentagon and the national security apparatus could well undermine Trump’s startling commitment to a face-to-face session with the 35-year-old Kim. The chances of such subterfuge may have increased last Thursday, when Trump named John Bolton, a singularly fanatical figure in far-right political circles, to replace H.R. McMaster as national security adviser. More on this in a sec.

The elephant in the room now is Xi Jinping’s China. Until the Chinese president agrees to meet with Moon and Shinzo Abe, it has no summit scheduled with other principals. There is some speculation, notably in the Asian press, that Beijing stands to be upstaged if Trump and Kim revive a peace process. This is upside-down logic, incautious wishful thinking in my read. One, Beijing has argued for years that the Korea crisis is a bilateral matter and can be resolved only when Pyongyang and Washington come to terms. Xi will greet the Trump-Kim summit with a big exhale. Two, China’s position as a regional power will be enhanced, not reduced, in the event a substantive settlement is put into effect. I will come back to this point too.

A lot is going to depend on personalities over the next couple of months. Four of them are in play — Moon, Trump, Kim and Xi — and as of now they appear to be more aligned than discordant.

Moon’s commitment to a settlement is beyond question. Reviving Kim Dae-jung’s “sunshine policy” is axiomatic in the Blue House. Moon’s parents were Northerners who fled South during the Korean War, so there is supposedly a sentimental side to Moon’s motivations. But I would not make too much of this: In my read, Moon’s position is all about principle, sound politics and bringing order to a too-long-torn nation. He has acted as a shuttle diplomat, Kissinger-style, since his election last May. At this point he leads the process — an achievement in itself, if you consider the other nations involved.

Now Trump. The Dealmaker wants a deal, partly to prove he can cut one in any circumstance and partly because his view of Asia runs to trade wars more than the kind that go boom. As to Xi, he wants nothing more than to see Trump succeed, and there is an overlooked factor at work here: China’s desire to use the North as a buffer against the West, while once true, is now cliché analysis — yesterday’s thinking (the kind our policy cliques and press are good at). Xi made China’s confidence as a regional and global power chest-out plain in his noted speech to the 19th Party Congress a year ago this spring; ties with Seoul have improved since Moon took office. Beijing no longer needs a piece of troublesome real estate on its northeastern flank to keep the West at a distance.

Now Kim. In the immediate term, he wants the numerous sets of sanctions now in place lifted, and he inherits the North’s abiding desire for diplomatic recognition. Possessing a nuclear deterrent, as Kim now claims, has fundamentally altered his stance, as argued previously in this space. Most important in the medium term, there are indications aplenty that he is an aspiring modernizer in the mold of his father, Kim Jong Il. He has already begun cautious, Cuba-style reforms — local markets, privately owned restaurants and small enterprises.

A lot of diplomacy — missed by most media — backs up these leaders’ more-or-less-aligned aspirations. Last week the EU Parliament disclosed that it has held 14 rounds of secret talks with senior North Korean officials over the past three years. These talks continue. As previously noted, my sources in Seoul say the Swiss were instrumental in negotiations leading to the North’s participation in the recent Winter Olympics in Pyeongchang. Moon has long worked with Beijing to revive the six-party talks the Obama administration canceled in 2009 — the format that put China, Russia, South Korea, Japan and the United States on one side of the table and North Korea on the other. On Wednesday came the first Blue House announcement that Moon wants a three-way conversation with Beijing and Tokyo in early May.

But a diplomatic settlement is a piece of paper with signatures scratched on it — far from worthless but lacking the kind of on-the-ground consequences that often make these things stick. It is Moon’s more substantive work, in my view, that will prove persuasive to Kim-the-modernizer if the coming summits bear fruit.

Working with Moscow, Moon now appears to have a good set of blueprints to integrate the North into a coherent Northeast Asian economy via a variety of resource, transport and industrial projects. This is flesh, muscle and bone. The intent is to develop North Korea and the Russian Far East while removing the North as an impediment to South Korea’s connections to the Asian landmass. The North appears ready: Contrary to conventional wisdom and despite the sanctions regime, South Korean economists report, the North’s economy grew by 3.8 percent in 2016 and 4.2 percent last year — in part reflecting Kim’s modest reform measures. China likes to build things in other countries, if you have not noticed. It will be an obvious beneficiary — and hardly a loser — as the economic side of Moon’s plans takes shape.

What about domestic resistance to an opening on the peninsula? There appears to be no shortage of it.

Moon continues to face some from the South’s diehard constituency of Cold War conservatives. But Moon’s people hold the upper hand in Seoul politics now. In China, Xi appears to have problems similar to Vladimir Putin’s, if on a different scale. There is hostility abroad to Xi’s South China Sea advances and the assertive aspects of his Belt and Road Initiative, while at home it is the other way around: Xi contends with old-line nationalists who would cede no ground to the U.S. — which, to them, begins at the 38th parallel — in a relationship they define by great-power competition. In this view, a success for Trump in his summit with Kim would mark a setback for China as it claims a decisive role in the region.

Again, I do not see this as more than a simplistic equation with no validity when considered even briefly against the facts. It is the same zero-sum thinking the Americans are addicted to. In any case, Xi’s position has been resoundingly confirmed in his newly declared status as “helmsman,” somewhat in the fashion of Mao Zedong. From this distance, his hawkish critics appear to be a mumbling minority. As to Kim, let us not talk of opposition in Pyongyang.

This leaves Trump’s foreign policy minders as the most plausible threat to success in the coming season of summitry.

No, one is not happy with the news that Bolton will now have routine access to the Oval Office and will whisper daily in Trump’s ear. Having followed the man since he began calling for war against the North in the late 1990s, I consider Bolton boundlessly reckless and among the stupidest people in public life. Watch a video of him at a podium. To say he is excitable is to put the problem too mildly. “Apoplectic” would be a better term for his day-to-day condition. He seems to live on barely contained anger against the great Other of WASP America.

In my view, it is the institutional resistance in Washington to talks of any kind with North Korea that one must watch and worry about. It is a question whether this constituency is prepared to cede leadership in Asia to Asians, and Moon’s administration has very effectively claimed it.