As the March for Our Lives grabs headlines, PBS presents "Dolores," godmother of social struggle 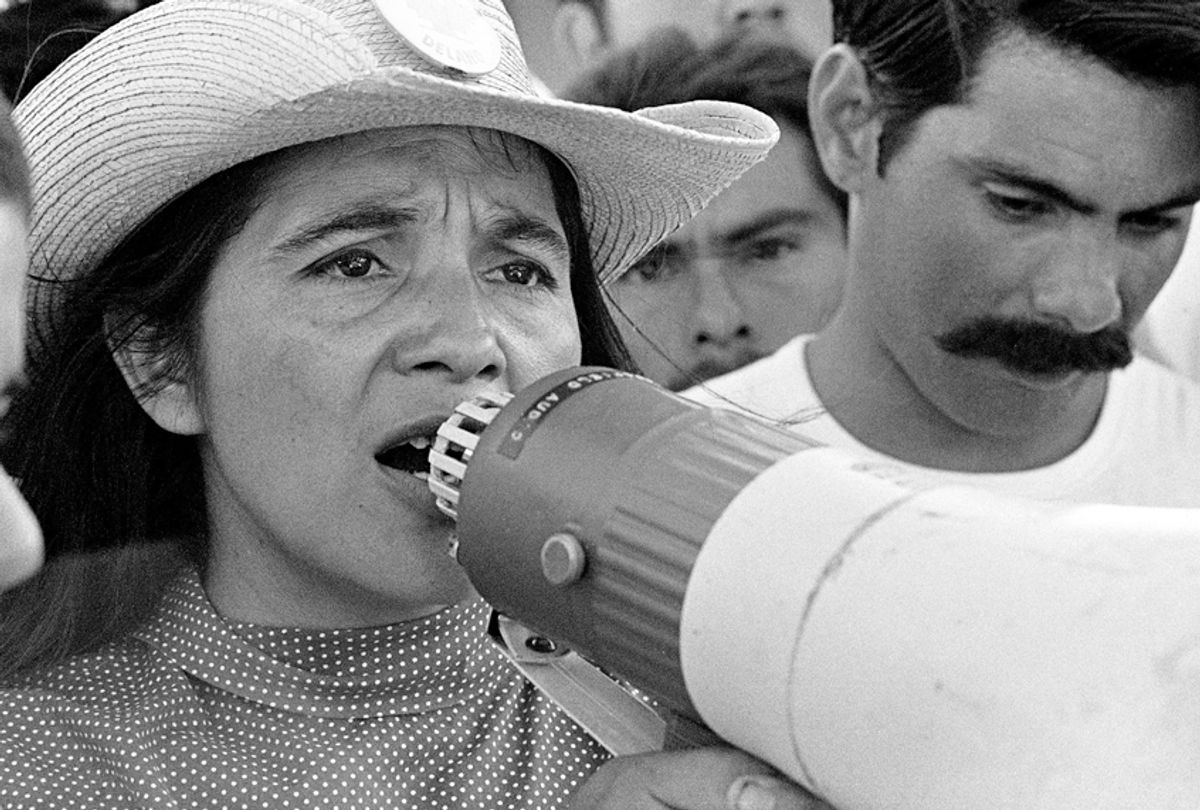 One of the lasting images emerging from the March For Our Lives in Washington features Emma González standing silently, tears streaming down her cheeks, for approximately six minutes. Based on what I've read those attending the event weren’t aware of this planned pause, a conscious silence meant to demonstrate how long it took for the lives of 17 of her classmates at Marjory Stoneman Douglas High School in Parkland, Fla., to be snuffed out in a mass shooting on February 14.

The 18-year-old is one of the #NeverAgain movement’s best-known figures because of her passion, and in part because her shorn head and unflappable composure has made her a favorite target among the political right.

During the march National Rifle Association supporters circulated a meme featuring doctored footage of her tearing a copy of the constitution in half, which was quickly debunked by social media users circulating the original image of her ripping a paper target in half next to the fake footage. Champions of social justice have long faced such efforts to slander and taint their intent in order to mute or bury their influence, making González part of a long lineage of warriors for change, joining the ranks of civil rights champion Dolores Huerta.

Huerta was one of the activists featured onstage at the 90th Oscars telecast that aired earlier this month, standing beside founders of #GirlsLikeUs, #BlackLivesMatter and #MeToo.

Honored beside her that that night was Nicole Hockley, managing director of the anti-gun violence organization Sandy Hook Promise, founded by parents of the children and teachers who died in the Newtown, Connecticut massacre in 2012. The parents in Newtown have been the standard bearers in the push for gun control since that horrific mass shooting, so in a real way the current moment owes a debt to them.

But all of the aforementioned honorees at this year’s Academy Awards owe a debt to Huerta, whose work, dedication and sacrifice is highlighted in the documentary “Dolores,” airing Tuesday at 9 p.m. on PBS’s “Independent Lens.”

Executive produced by Carlos Santana and  directed by Peter Bratt, “Dolores” glows with a celebratory spirit as it illuminates the details Huerta’s life’s work, and her love of life. Time and again Bratt employs visual callbacks to Huerta’s twinned loves of music and dancing, using archival footage of live musicians and film of brown men and women dancing in traditional regalia as well as simply grooving on city stoops. The filmmaker handles Huerta’s story with consummate affection and reverence, and this serves to amplify the degree of injustice done to her legacy.

To the same extent that the liveliness governing “Dolores” gives Huerta her due, it is also a story of erasure. Not only does it call attention to the concerted efforts to write her out of civil rights history, it also points out political efforts to destroy the gains of a generation by legislating ethnic-centered education out of school systems, as is the case in Arizona.

It has frequently been remarked that our current, youth-led movement to enact common-sense gun control legislation feels different, as if it just might succeed where past efforts have not. That may prove to be true.  The high profile of González and other young leaders among the Parkland Survivors has been magnified by social media, and as such, rides a crest of momentum that many hope will result in a blue wave in November.

But history is the story of ebb and flow, surging gains and optimism interrupted by retreat and setback, which is precisely the lesson of “Dolores.” For though there was a time when she stood at Robert Kennedy’s side, sharing in celebrating his win in the 1968 presidential primary in California, a decade ago Bill O’Reilly was claiming that he’d never heard of her and other right-wing commentators and politicians were referring to her as Cesar Chavez’s girlfriend.

Peter Bratt takes care to ensure that “Dolores” maintains its focus on the biography of his subject, who calmly tells her own story alongside accounts from her children, politicians, filmmakers and activists including Gloria Steinem and Angela Davis. And while one would think that to be a simple task, Huerta’s career and person life takes so many turns that the viewer soon appreciates how deftly the filmmaker streamlines her achievements as well as surfacing her flaws.

Soon, however, Huerta’s localized activism expanded nationally when she connected the migrant labor’s struggle to environmental concerns over pesticides being used to grow our foods. Eventually she joined forces with movements led by women and African Americans in order to increase their combined impact on national politics. The nationwide grape boycott in the mid-1960s? She played a significant role in that.

Another of her most effective strategies was to mobilize voters using door-to-door campaigning, the same grassroots-style action plan Barack Obama used to win the presidency in 2008.

Much of what is revealed in “Dolores” may come as a surprise to people who lionize labor icon Cesar Chavez. Huerta worked side-by-side with Chavez, and the film carefully examines the point at which her path meets and merges with his. (She also had a long-term relationship with Cesar’s brother Richard, with whom she had four of her 11 children.) All while Bratt takes pains to ensure the narrative remains firmly about Huerta, making a solid case as to how and why Chavez’s significance to our modern social justice movements has been elevated while Huerta’s was muted.

Among other things, thanks to a process of steady revisionism, the average person attributes a popular slogan Huerta originated, “Sí se puede,” to Chavez. Even Obama mistakenly did this in anglicizing the rallying cry to make “Yes We Can” his campaign slogan.

“The assumption was, he was the leader, and Dolores was the housekeeper of the movement,” Davis says with no small amount of frustration.

Eventually Obama corrected his error, awarding her the Presidential Medal of Freedom while doing so.

As a nimble and engaging history “Dolores” is a wonderful achievement. But it’s also a primer for all movements dedicated to enacting change: Huerta sacrificed a life with her family, endured endless slander and survived violence that nearly ended her life to fight for justice. Even now, at 87, she simply says this is what is required to make change possible.

Her message, echoed throughout the film by the politicians, teachers, artists and other pioneers she inspires, is that any justice movement requires total commitment, that regardless of how many wins a person nets, all involved must remain engaged and keep fighting.

Youthful fervor can be famously fickle, and the NRA still pours millions into purchasing the votes of politicians at the local and federal levels. But some six decades ago, Huerta faced down agribusiness, a group of wealthy growers she told were “too rich, they’re too powerful and they’re too racist” to listen to the demand of poor field workers, and emerged victorious again and again.

And it seems that the kids spearheading the battle against the gun industry are aware that they're taking on a long campaign. In article that ran in The Nation, Gonzalez told reporters covering the D.C. protest that her involvement in this movement “is probably gonna be years, and at this point, I don’t know that I mind. Nothing that’s worth it is easy. We’re going against the largest gun lobby. We could very well die trying to do this. But we could very well die not trying to do this, too. So why not die for something rather than nothing?"

Consciously or unconsciously, Dolores Huerta has touched the life of this young woman.  “Dolores” stands as a physical testament to this, and hopefully, it’s just a start of a larger reassessment of her place in our nation’s story.