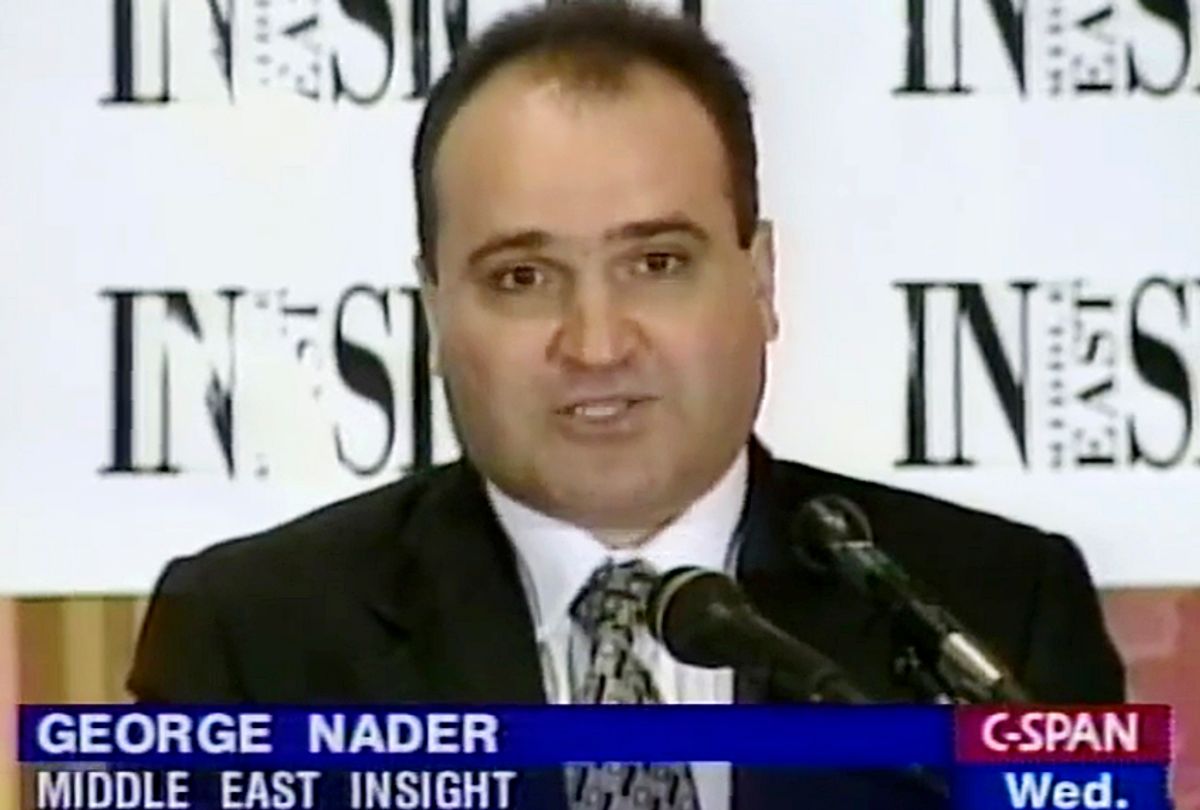 This 1998 frame from video provided by C-SPAN shows George Nader, president and editor of Middle East Insight. (C-SPAN via AP)
--

After he received the funds, Broidy donated funds to lawmakers "considering legislation targeting Qatar" in the weeks to come, an investigation by the Associated Press showed. The money was wired to Broidy through a company in Canada in April 2017. The sources in the investigation said "Nader paid the money to Broidy to bankroll an effort to persuade the U.S. to take a hard line against Qatar, a long-time American ally but now a bitter adversary of the UAE."

Only a month after he received the money, Broidy "sponsored a conference on Qatar’s alleged ties to Islamic extremism." At the conference, Rep. Ed Royce, R-Calif., the chairman of the House Foreign Affairs Committee, said he would introduce legislation that "would brand Qatar as a terrorist-supporting state." Two months later Royce was given $5,400 in donations from Broidy, the maximum amount allowed under law.

Broidy has given a total of "just under $600,000" in a push for legislation that condemned Qatar, to Republican members of Congress as well as Republican committees, the AP reported.

He defended himself in a statement to the AP and said he had long been vocal about the issue, as he has also "donated millions of his own money to efforts to fight Qatar," a source told the AP.

"I’ve both raised money for, and contributed my own money to, efforts by think tanks to bring the facts into the open, since Qatar is spreading millions of dollars around Washington to whitewash its image as a terror-sponsoring state,” Broidy said in a statement. "I’ve also spoken to like-minded members of Congress, like Royce, about how to make sure Qatar’s lobbying money does not blind lawmakers to the facts about its record in supporting terrorist groups."

But his past efforts have dwarfed his ramped up spending since last year.

Both Nader and Broidy have shady legal backgrounds. Nader was convicted on multiple counts of sexually abusing minors in a Czech Republic court in 2003, the AP reported. And Broidy "was sidelined for a few years after he pleaded guilty to bribery in a case stemming from an investment scheme involving New York state’s employee pension fund."

All of this pertains to the Mueller investigation because Nader is an adviser to Abu Dhabi Crown Prince Sheikh Mohamed bin Zayed al-Nahyan, the leader of the United Arab Emirates. And Mueller has been reported to have widened the scope of the investigation to include ways in which foreign finances could have impacted the 2016 election.

The special counsel has also been reported to be investigating Jared Kushner, Trump's son-in-law and senior adviser, who may have used his influence to retaliate against Qatar after an alleged financial deal fell through, as Salon has previously reported. Mueller has been reported to be looking into conversations Kushner had with people from China, Russia, Turkey and the United Arab Emirates. It was also recently reported that Saudi Arabian Crown Prince Mohammad bin Salman had bragged to the UAE's bin Zayed that he had Kushner "in his pocket." The AP elaborated:

The timeline of the influx of cash wired by Nader, an adviser to Abu Dhabi Crown Prince Sheikh Mohamed bin Zayed al-Nahyan, the de facto leader of the UAE, may provide grist for U.S. special counsel Robert Mueller’s legal team as it probes the activities of Trump and his associates during the 2016 campaign and beyond. However, it is not clear that Mueller has expanded his investigation in that direction.

Mueller’s investigators are looking into two meetings close to Trump’s inauguration attended by Nader and bin Zayed. The pair joined a meeting at New York’s Trump Tower in December 2016 that included presidential son-in-law Jared Kushner and Steve Bannon, who was Trump’s chief strategist at the time. A month later, Nader and bin Zayed were a world away on the Seychelles island chain in the Indian Ocean, meeting with Erik Prince, the founder of the security company Blackwater, and the Kremlin-connected head of a large Russian sovereign wealth fund, Kirill Dmitriev.

At the time of Broidy's efforts, there was a major shift in the Gulf region as Saudi Arabia and the UAE sought to isolate Qatar. "These tensions came to a head when the UAE and Saudi Arabia launched an embargo with travel and trade restrictions against Qatar less than two weeks after Royce introduced the sanctions legislation in the U.S. House of Representatives," the AP reported.

It wasn't long before Trump joined in weeks later on Twitter, and condemned Qatar as well.