From Russia, not in love: How will "The Americans" play out? 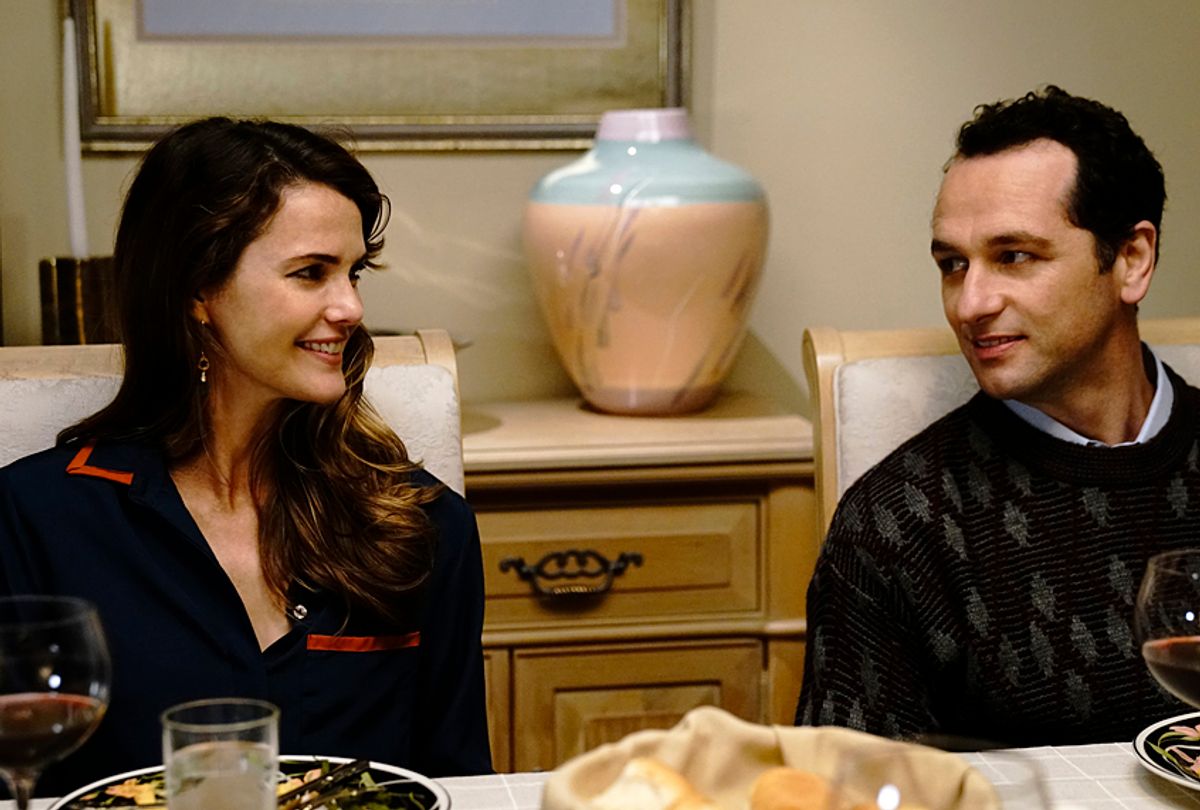 Keri Russell and Matthew Rhys in "The Americans" (FX/Patrick Harbron)
--

By the end of the season 6 premiere of “The Americans,” one gets the feeling that Philip and Elizabeth Jennings’ relationship has an even lower survival probability than when the undercover Soviet spies paired up in the first place.

With each passing season their professional marriage grows further entangled with their feelings for each other — or, really, Philip’s (Matthew Rhys) feelings for Elizabeth (Keri Russell). For Elizabeth the mission and the Motherland always come first, even before their children Paige (Holly Taylor) and Henry (Keidrich Sellati).

Vowing allegiance is different from honoring it, and the chilliness of this final season, set in motion Wednesday at 10 p.m. on FX, takes on a fatalistic clarity within the three episodes sent to critics. There’s an old saying about mothers loving their sons and raising their daughters, and this takes on a twisted new meaning as Elizabeth further indoctrinates Paige into the family trade.

While mother and daughter venture deeper into the dark, Philip more fully embraces the American dream through the travel agency that serves as a cover but has blossomed into a legitimately successful enterprise. Elizabeth’s heart remains Russia as Philip’s is pledged to his family. How can this possibly end well?

The marriage, we mean. From all evidence “The Americans” appears to be on course to close up this story in a way that satisfies its fans if, indeed, it doesn’t blow us away. The wise viewer is familiar enough with television history to keep all premature hyperbole in check until we’ve seen the final edit.

One can be forgiven for wondering, too, whether a kind of halo effect of the electorate’s focus on all matters Russian will benefit the series. Its executive producers and co-showrunners Joel Fields and Joe Weisberg have to have known when and presumably how the drama would end since May 2016, before a reality star became president and declared any negative coverage about him to be “fake news.” Or, for that matter, before investigations into the extent of Russian interference in our elections commenced, and said reality star’s campaign officials and family members came under investigation for possible collusion and obstruction of justice.

Besides, this final season takes place in 1987; back then the man who would become our president (with or without assistance from the Kremlin) was symbol of ostentatious wealth and playboy privilege, everything Elizabeth is fighting against.

“We're not interested in what's going on right now. We close ourselves off to it,” declared Weisberg in a recent interview with Salon. “I don't mean we don't follow it. We do. But it's not a part of our storytelling because when you look at the series and what it is, what's happening now just isn't relevant.”

Where there are parallels, Weisberg concedes, is when the show plays with the definitions of patriotism and loyalty. These are characters whose identities have been molded by politics and who put individual desires secondary to the needs of their country. The Jennings have exploited innocent lives and killed people who made the mistake of getting in the way of fulfilling what is demanded of them, occasionally in a sinisterly maternal way by their handler Claudia (Margo Martindale).

But even as Elizabeth has accepted this indoctrination, Philip has doubts. And though Paige feels the tug between her American life and the reality of her Russian heritage, the most harrowing elements of these episodes are based in her desire to please a mother who is teaching her to divorce herself from familial affection.

“By the way, it's not untrue of people in America either — certain feelings we have about democracy and freedom are also just intimately connected with who we are,” Weisberg added. “But in the Soviet Union, it came with kind of an overt, constant, dogmatic language. . . . It's a little [easier] to see it when it's not you. But they were very proud of thinking about that being political. They didn't hide from that. That's who these people are, so that's what this show is.”

Thematically the story of the Jennings has circled back to where the show began in 2013, with Elizabeth and Philip occupying separate corners of a professionally arranged marriage. The producers and its stars frequently remind viewers that this is the soul of “The Americans.”

“One of the most attractive things about this show is that I read the pilot and [I] go, ‘How are they gonna resolve? How is this gonna resolve itself?’,” Rhys said. “That's where I think this season begins. I’m asking myself the same question, because, once again, they're just polar opposites.”

“It is such a relatable marriage moment,” Russell added. “Where they're just so distant from each other, where it's not even the fire and the closeness of being mad at each other. They're just far. They're really far, which is a far sadder moment in a long-term relationship. There are moments when you're trying, you let the other person change to survive, but it doesn't necessarily mean it's gonna work for the other person.”

That point of relatability may be what the drama’s fans will miss most of all, real world anxiety notwithstanding. The edge of these final episodes is that reminder bubbling just below the surface that Philip and Elizabeth’s superiors require each of them to take the ‘til death do us part of the pledge very seriously. That, more than any breaking news, keeps the audience guessing and continues to earn the show’ status as one of the smartest series on television.

“When we started making the show, this notion of Russia as our enemy seemed so nostalgic,” Fields observed. “That there was an era 30 years prior when we all lived under the threat of global thermonuclear annihilation because we had these missiles poised at one another. And now here we are, five years, six years later, and we've been the victim of a recent Russian attack on our democracy that we're still dealing with, figuring out, in some ways still reeling from that.

“The very fact of . . . purposefully not thinking about it all, that we're living in a bubble, provokes this notion that, while we're living when we're living, and we're feeling either under threat of global thermonuclear attack, or under the rattling effects of having had our election attacked, it's easy to forget that history moves and perspectives change. Thirty years from now, if all goes well, we'll all look back on this moment and there'll be nostalgia for it.”