So much for the #NeverTrumpers: Weeks after denouncing intolerance, Romney says he's more Trumpy than anyone 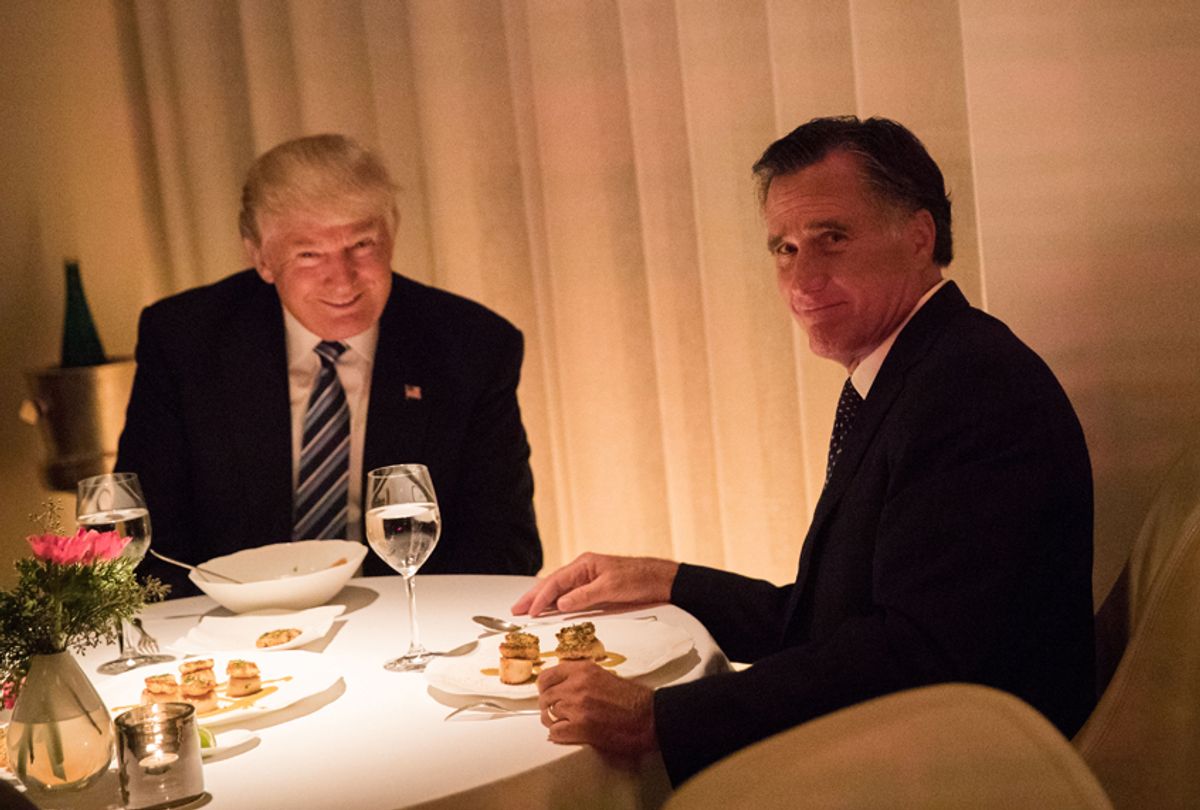 I am probably more tolerant of #NeverTrump conservative pundits than a lot of liberals, simply because I think many of them are ruthlessly effective at taking apart their political opponents. In the Trump era, I figure we need all the rhetorical firepower we can get. While I'm not going to forget their role in bringing us to this moment or write paeans to their great moral awakening, if they are willing to put their dark talents to work to help in this national emergency I'm not going to stand in their way.

Likewise, I'd be willing to cut GOP elected officials who criticize the president some slack -- if they ever backed up their words with action. It's not as if they don't have any power. All it would take right now is three senators switching parties, even unofficially, to put the Senate in Democratic hands and at least apply the brakes to this slow motion train wreck. (Why not lame ducks John McCain and Jeff Flake, both of Arizona, and Bob Corker of Tennessee, for example? They literally have nothing to lose.) I'll give McCain, Susan Collins, R-Maine, and Lisa Murkowski, R-Alaska, plaudits for refusing to sign on to the Obamacare repeal. I welcome McCain's curmudgeonly complaints in other matters. But they've all voted in lockstep with the president on everything else, despite their harsh criticisms of him, so their protestations of independence are pretty weak tea.

Even Ohio Gov. John Kasich, who is obviously angling for the permanent McCain Sunday-show slot, is mealy-mouthed in his criticism. And there are effectively no GOP House members who aren't marching over the cliff behind the president.

According to Bob Corker, this is because the voters just love Trump so darned much:

The president is, as you know — you’ve seen his numbers among the Republican base — it’s very strong. It’s more than strong, it’s tribal in nature. People who tell me, who are out on [the] trail, say, look, people don’t ask about issues anymore. They don’t care about issues. They want to know if you’re with Trump or not.

None of these so-called leaders are prepared to buck that sentiment, even though the vast majority of them know very well that the man is uniquely incompetent and unworthy.

There is one person who has been held up all along as a possible leader of the #NeverTrump GOP auxiliary of the resistance: former Massachusetts governor and 2012 presidential nominee Mitt Romney. He gave one of the more memorable scathing assessments of candidate Trump in 2016, asking people to "think of Donald Trump's personal qualities, the bullying, the greed, the showing off, the misogyny, the absurd third grade theatrics" and condemning him for his scapegoating of immigrants and Muslims and his endorsements of torture. Romney continued:

Here's what I know. Donald Trump is a phony, a fraud. His promises are as worthless as a degree from Trump University. He's playing the American public for suckers: He gets a free ride to the White House and all we get is a lousy hat.

Then Trump won, and within weeks Romney was kissing his ring in the hopes of becoming secretary of state. That picture of the onetime anti-Trumper sitting with the gloating president-elect at Jean-Georges restaurant (in the Trump International Hotel), looking for all the world as if he'd just signed the deal to sell his soul, went viral.

Romney didn't get that job, of course. There were rumors at the time that Trump just wanted to publicly humiliate him, and more recent rumors that Russia had sent word that Romney was not acceptable to the Kremlin. Whatever the case, his rejection perversely served to restore his reputation as The Last Man of Integrity and king of the #NeverTrumpers.

Now Romney is running for the Senate in Utah, where he is nearly certain to replace the retiring Sen. Orrin Hatch. He gave quite an announcement speech on Feb. 16, which CNN characterized as a "sharp rebuke of the Trump administration's exclusionary tone on immigration." The network quoted Boyd Matheson, opinion editor at the Deseret News and former chief of staff to Utah's other senator, Mike Lee, saying that the Beehive State had a history of accepting "exiles," meaning its majority Mormon population. Matheson said Romney was sending a double message: "One, America is about immigrants, it always has been, and Utah recognizes that and the value it brings."

That CNN report noted that Romney's position had moderated substantially from his 2012 platform, in which he proposed a policy that amounted to harassment designed to "encourage" undocumented immigrants to "self-deport." He had used the immigration issue to ruthlessly demolish his opponents during the 2012 primaries, memorably trashing Rick Perry for his then-mainstream position on in-state tuition for DACA recipients as governor of Texas.

His fresh message of inclusion reflects the moderate position of many Utah Republicans on immigration, which is shaped by the progressive stance of the Mormon Church here as well as the individual experiences of many Mormons during their two-year missions abroad.

Well, so much for the fresh message. On Tuesday, the Utah Daily Herald reported that Romney made clear he's still the same guy he was back in 2012. When asked to prove his conservative credentials at an event in Provo, he said:

I’m also more of a hawk on immigration than even the president. My view was these DACA kids shouldn’t all be allowed to stay in the country legally.

He did allow that some of these people who've been here since they were small children might be considered equal to those of us whose mothers gave birth on American soil -- but only if they prove it by working in certain jobs to prove they are worthy. That's big talk for a guy whose father was born in Mexico. Of course, that only happened because Romney's grandfather was evading prosecution for his polygamous lifestyle, which apparently gives Mitt the moral authority to pass judgment on these young people who've lived in America almost their entire lives.

Like the other alleged #NeverTrump Republicans, Romney is attempting to have it both ways by positioning himself as the true conservative, opposed to the apostate Trump, while simultaneously adopting Trump's most noxious policies. It won't wash: This corrupt and indecent Republican Party is his party through and through, from the #MAGA hat voters up to President Donald Trump.