Conservatives can't stop themselves from bashing Parkland students: But why? 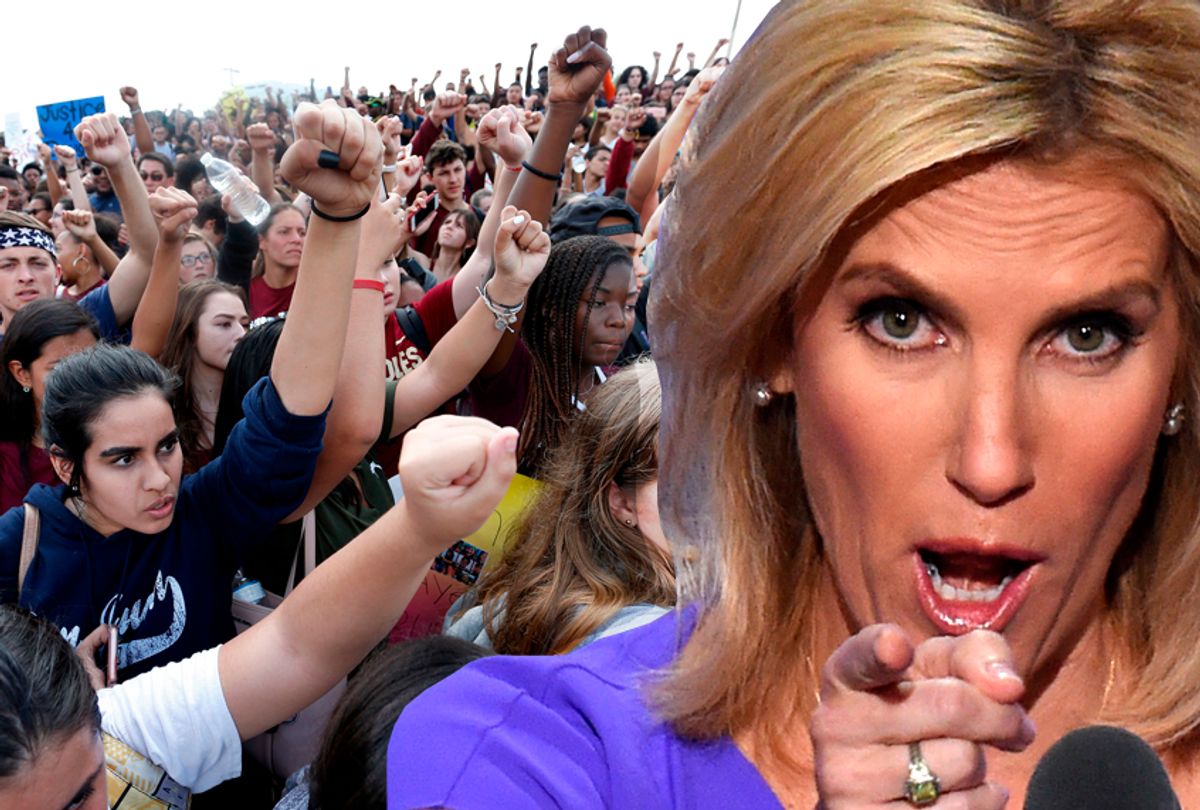 Whether or not one agrees with their support for gun control, it should seem obvious that the survivors of the Marjory Stoneman Douglas High School shooting in Parkland, Florida, last month would be sympathetic figures. These young people have clearly been traumatized and are speaking out from sincere conviction, which suggests it would be unwise for those who disagree with their views to attack them personally. But that's exactly what conservative politicians and pundits are doing, and with increasing boldness.

The bottom-feeders of the right-wing ecosystem, of course, haven't held back at all. Alex Jones has equated the Parkland survivors to Nazis, suggesting they intend to murder gun owners. "Alt-right" sites are spreading fake images of the kids and spreading conspiracy theories, including claiming that the students are actors or that no massacre happened at all. Breitbart has joined in, trying to convince readers that Parkland student David Hogg threw a Nazi salute during last weekend's March for Our Lives. (He didn't.)

But more mainstream outlets and pundits have also become focused on discrediting and smearing teenagers who, just a month ago, were hiding in fear while their classmates were massacred. Todd Starnes of Fox News called the kids "cultural jihadists." And while most commentators on Fox News wouldn't openly call the Parkland students "crisis actors," several have hinted that might be the case, by suggesting the kids were unable to think for themselves and were being controlled by outside forces.

Then there was the condescension and name-calling, as with Tucker Carlson sneering that these traumatized survivors are "self-righteous," Pete Hegseth whining about the "sanctimoniousness of a 17-year-old" and Jesse Watters calling Hogg "a real bomb-thrower." (Better, apparently, for him to be a real assault-rifle shooter?)

There are dozens more examples, but the trend is clear: Conservatives have decided that rather than engaging the arguments these kids are making, they will try to discredit the messengers, often through blatant ad hominem attacks. Ben Shapiro's popular website Daily Wire actually touted Hogg's rejection letters from four universities, as if that were evidence that the young man's political views are inherently wrong. Why are these supposed conservatives being so vicious toward high school kids who have done nothing wrong and are struggling with a massive trauma?

“I think conservatives view themselves as having little option but to try to take on these kids," said Matt Gertz of Media Matters, who has written extensively about the attacks on the Parkland survivors by right-wing media. "They know these students are incredibly good on television. They’re good messengers for the gun violence prevention movement and they’re getting a lot of attention."

“When you see people fighting in a debate, most people don’t really care about the content of the message," explained Dan Kahan, a Yale law professor and head of the Cultural Cognition Project. "They’re using the identity of the fighters to figure out whose side they should be on.”

Most people determine their opinions, Kahan continued, based not on cold analysis of the facts but on their "affinity group." If people like you are for guns, then you are for guns. More important, if people that you consider weird, different or bad — as Fox News viewers have been coached to believe liberals are — have a pronounced opinion, that inclines you to take the opposite view.

That's one reason that the debate over gun control seems to have calcified, even though the majority of Americans, including most conservatives, support policy ideas like universal background checks. But advocates for gun control are framed by conservative media as condescending, snooty nanny-state liberals, and all discussion of policy falls apart in a culture-war panic where guns are treated as symbolic totems, rather than products that can be subject to common-sense safety regulations.

Conservative pundits have had this routine down cold for decades: Tell their followers that the only people who want gun control are liberals, and the audience will reject the message of gun safety even if, under more neutral circumstances, they might agree with the policy ideas. But the Parkland students seem to have disrupted that strategy.

Survivors of the Stoneman Douglas shooting are "not iconic representatives of a certain ideology," Kahan said, "and there’s nothing they’re getting out of this except attention to the issue. And they’re kids. Their effectiveness does depend on the impression that these are just uncoached kids who are giving you their genuine assessment of what’s going on."

It does seem as if the Parkland teens have shaken some Republicans out of their identity politics-driven knee-jerk reactions. Support for gun control has risen dramatically in the wake of the shooting, and most of the increase is due to Republicans rethinking their previous opinion. Likely this is because, as Kahan said, they can't dismiss the students as nefarious liberals funded by George Soros and working some dark culture-war agenda. A lot of these kids look like their own kids or grandkids, after all.

So the campaign in right wing media, driven in large part by the NRA, has been aimed at getting their audience to stop thinking of these kids as kids. That's why the Parkland students are repeatedly characterized as puppets of some shadowy liberal conspiracy, so the audience will look past the sympathetic teenagers toward the imaginary liberal stereotypes they've been trained to hate.

Increasingly, the kids themselves are being cast not as survivors of a massacre but as representatives of liberal ideology. Hogg, for instance, is being framed in right-wing media as a self-important liberal elitist who is "sanctimonious" and "self-righteous." Right-wing pundit Erick Erickson, an occasional contributor to the New York Times, tried to cast Hogg as a phony, retweeting a false accusation that Hogg wasn't even at school during the shooting. (Erickson has since deleted that tweet and retracted the allegation.)

Emma González is getting a lot of negative attention for being an outspoken young woman and has been stereotyped for her Cuban heritage, with right-wingers circulating a fake image of her tearing up the Constitution. (It was actually a gun-range target.)

Gertz noted that the same strategy has been used by right-wing media to discredit unarmed young people of color who were shot and killed by police or vigilantes. Young men like Michael Brown and Trayvon Martin have been subject to posthumous smear campaigns, sometimes elevated by mainstream media outlets, that recast them as dangerous thugs who, on some level, deserved to die. Now the same malicious media machine is being used to undermine these Parkland survivors.

Will it work? It's hard to say. On one hand, the desperation the right is bringing to this smear campaign suggests a real fear that the Parkland kids can penetrate the defenses of conservatives who would normally tune out liberal commentators. On the other hand, Gertz noted, "the bifurcated media environment" of our moment means that "conservatives are hearing a lot of terrible things about the kids," and far too many of them are eager to believe those things.

But these kinds of emotional pressures work both ways. The more vigorously right-wingers attack the Parkland kids, the more fiercely liberals will want to defend them. That matters, because one reason gun control has been so hard to pass is that pro-gun people, although they're a small minority, bring a level of passion to the cause that gun-control supporters simply don't. Research shows that gun owners are more likely to call elected officials than non-gun owners about gun policy. That could change if conservatives keep enraging liberals by picking on these traumatized kids. By trying to undermine these young activists, the right may only be giving them more power.