Should Adam Sandler record a Passover song? A debate

Apparently there are people who think this would be a great idea, and Salon's Jeremy Binckes is one of them 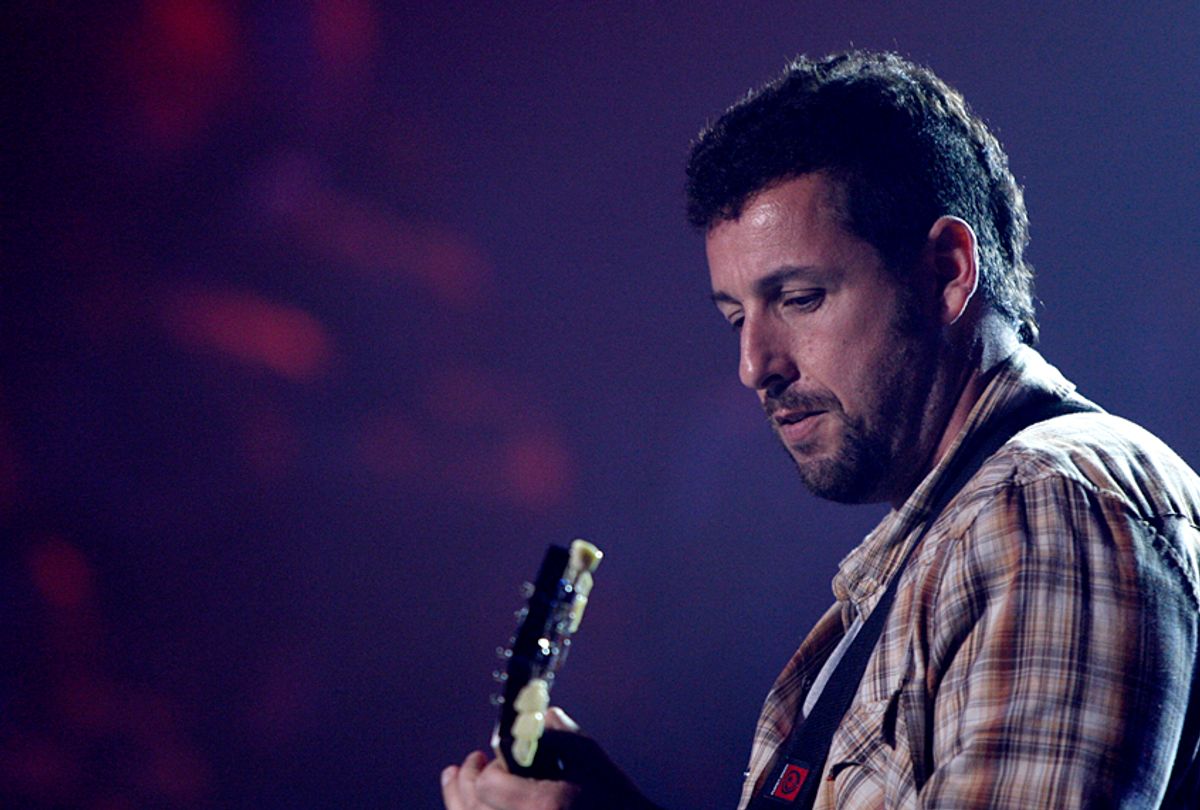 The Jewish holiday of Passover is here. And with the holiday upon us — the remembrance of the chosen people's flight from slavery in Egypt — let us consider the question nobody is asking: Where is the Adam Sandler song?

Sandler — who has brought us four songs merely listing people who are Jewish, and one feature film about Hanukkah — has been silent on other Jewish holidays, like the one that requires Jews to abstain from eating bread products for eight nights. But Manischewitz, known to Jewish people for amazingly sweet wine and matzo, among other things, wants to change that. Here's their pitch to Sandler, which they shared with us:

The Manischewitz Company, the largest marketer of Kosher Foods in North America, thinks that the world needs a Passover song, and who better to write and sing it than YOU?!

To get your creative juices flowing, we are offering you a fun Passover challenge and the ‘suite’-est deal around – a fully stocked, state-of-the-art hotel suite equipped with all the Manischewitz products you grew up loving. It is our hope that you would do one thing for us: once again “put on your yarmulke” and compose a follow-up to your smash hit The Hanukkah Song for the families of the world celebrating the Passover season to enjoy!

Passover begins on March 30, and we here at Manischewitz are very busy stocking store shelves across America with our matzo, gefilte fish, soups and more so that Jewish families across the world can enjoy their Passover Seders. But, Manischewitz feels like something is missing as we plan for the holiday – kids need a fun and engaging song and story to bring the holiday to life!

As part of our offer, your spacious, comfortable hotel suite will be fully equipped with musical equipment and packed with delicious Manischewitz products including our famous Matzo Ball soup, all the gefilte fish you can eat and plenty of matzo. Take a look at the attached photos – “not too shabby,” right?

Additionally, we will provide you with free Manischewitz Products for life, as a thank-you for penning the new Passover anthem.

Come on Adam, take our challenge – we know it will be “so much funukah!”

Granted, the Manischewitz people are leaning really hard on the Hanukkah song, but it's worth debating. Salon's Jeremy Binckes and Erin Keane are here to weigh in on the merits of having Adam Sandler compose a special ditty for the big holiday.

Jeremy: There was a time that Adam Sandler was a veritable American darling. It's hard to believe that he performed the first Chanukah Song on national television more than 23 years ago. If the goal of the Hanukkah song was to launch Sandler onto the national spotlight, one could say that he succeeded. The funny song was Sandler at his best. It was innocent, it was funny, it was cute and it wasn't in your face. Let's be honest, the Hanukkah song was fantastic, especially how it lives on recordings – the shy Sandler trying to get through a list of Jewish people in Hollywood — ya know, people fellow Jews could look up to.

But eventually, cute Sandler turned into rocker Sandler. And the song turned into a rock spectacle:

What's happened in the years since then? Well, Sandler went on to hit peak Sandler — the obnoxious, in-your-face character in "Billy Madison" and "Happy Gilmore." And yes, he did have some good roles — I mean, he had good reviews for "The Wedding Singer," and I personally liked "Punch Drunk Love" — but Sandler may have hit a wall when 2000 rolled around. That's when he started racking up nominations for the "Golden Raspberry" award for the worst performance in a leading role.

He's been nominated for a worst award 11 times and has won it three times. It's safe to say that he's in need of a career resuscitation. And Passover may be the perfect time to start.

At its heart, Passover is the story of liberation. And it's the story of finding freedom. It recalls a time when Jews were slaves in Egypt. And Moses — a Jew — became the defender of the Jewish people when he challenged the Pharaoh, "Let my people go." What followed were plagues that punished the Egyptian people: The waters turned to blood; plagues of frogs and lice occurred; pests killed the animals; boils emerged on the people; fire and ice rained down from the sky; locusts ate everything; a darkness fell upon the land; and finally, the first-born males in Egypt were killed when God passed over the houses of Egyptians.

But, to Jewish scholars, Passover is a metaphysical thing, too. It's about understanding what the true meaning of freedom is, by giving up bread for eight days and nights. Directly, it's a response to the hasty exodus from Egypt, which forced the Jews to run so fast that they took unleavened bread with them. As Chabad.org notes:

Freedom is commonly perceived as the removal of all external constraints on a person's development and self-expression. Freedom is the natural state of man, this line of reasoning implies; free him of all outside forces that limit and inhibit him, and you have a free human being.

Passover embodies a far more ambitious freedom. The exodus from Egypt, which marked the end of Israel's subjugation to their Egyptian enslavers . . . We then proceeded to also free ourselves of the alien influences that constrained us from within the pagan habits and mind-set that centuries of subjection to the depraved culture of Egypt had imposed on us, and our own inborn negative inclinations.

All of this is to say that Passover represents the perfect time for the rebirth of Adam Sandler. He can free himself from the Sandler that has become, well, detested in some circles, and ignored in others. He can re-connect with his roots. It may not be another list of Jewish people, but it could be a way for him to find the spark again. Maybe this time it's through his desire to eat bread?

Erin: I'm confused about your metaphor, Jeremy. Is Adam Sandler's career a plague to endure or a tyranny to escape? (The answer is "yes.") Remember that removing "all external constraints on . . . [his] self-expression" got us Adam Sandler riding an ostrich in "Blended." I realize I'm the gentile in this debate, so it's not really up to me, but can't we let Passover keep its dignity? Be careful what you wish for here. Do you really want to be singing "Book a cruise to St. Kitts and Nevis / After we drink all the Manischewitz" once a year for the rest of your life?