In a Salon exclusive interview, the artists behind the art protest explain how they schemed their devious plan 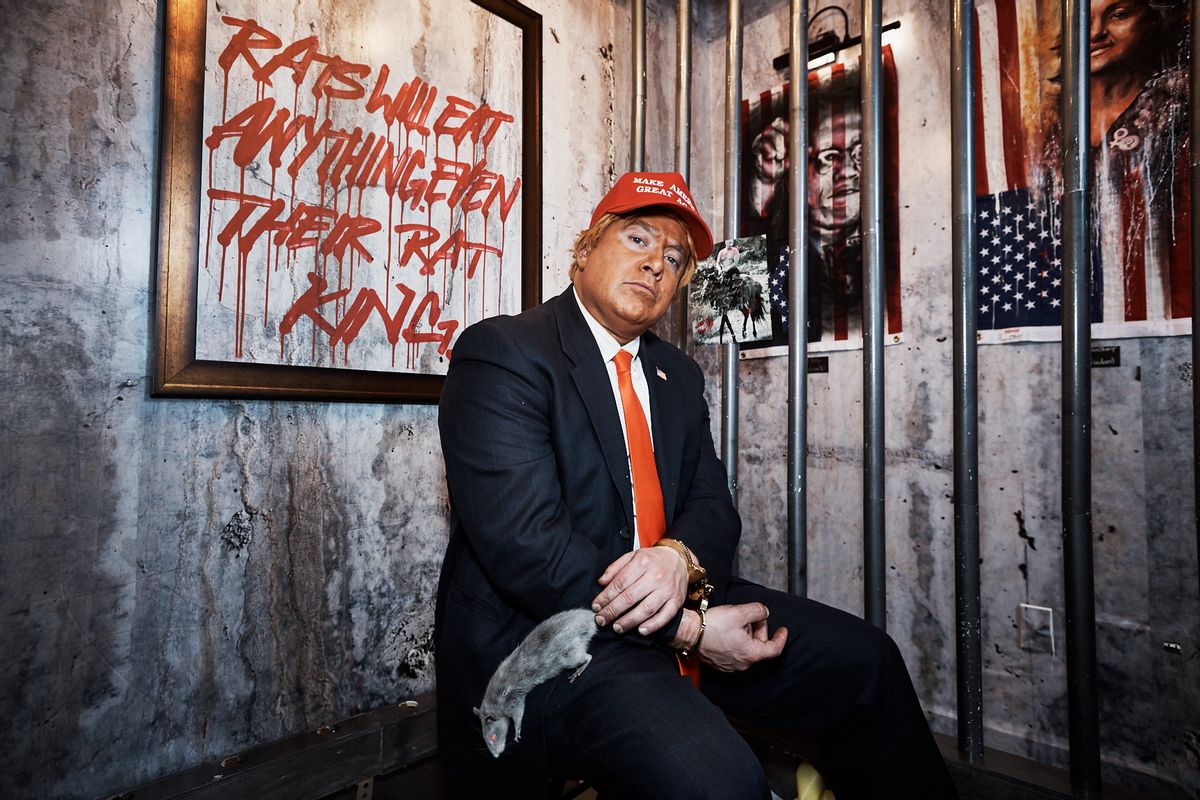 A collective of anti-Trump artists pulled off a powerful and clever art exhibit, called "The People's Prison," which featured live rats crawling on a President Donald Trump impersonator imprisoned in golden handcuffs--in a Trump hotel suite in New York City. The activist art collective, INDECLINE, which is comprised of anonymous graffiti, photographers, and activists, transformed the hotel room at the Trump International Hotel and Tower on March 29, and fortunately, were able to escape the suite unscathed. Known for their provocative art protests (remember the Naked Trump statues?), Salon spoke to one of the artists--under anonymity--to learn more about the inner-workings of the latest heist.

What inspired the exhibit? Can you tell us more about what was inside, and what was symbolic about it?

After the election, INDECLINE vowed to shadow President Trump’s every move and provide our own set of checks and balances. Over the course of the last two years, we’ve taken our anti-Trump messages to the streets, his golf courses and recently felt the need to conceptualize something of a Trojan Horse and crash the gates of his New York City hotel. We’ve always been inspired by America’s long, vibrant history of radical activism and protest, especially in times of social unrest and given Trump’s aptitude for manufacturing a climate of racism, arrogance and global chaos, we felt that creating something within the rotten core of the Big Apple, in his own hotel, would be fitting.

The room we booked was a one bedroom suite. After everything was carefully dismantled and stored in the closets, bathroom and bedroom, a team of seven activists refurbished the walls with new “concrete” wallpaper, hung 13 American flags displaying the images of different radicals, revolutionaries and activists and built a floor to ceiling jail cell. Inside of the cell, was a Donald Trump impersonator wearing a pair of golden handcuffs and surrounded by a half dozen live rats and McDonalds wrappers. There was also an 8 by 11 black and white photo of a shirtless Vladimir Putin with a handwritten message that read: “Don’t worry baby, I got you in and I can get you out”.

“The People’s Prison” calls on American citizens, especially artists, to keep this necessary fight alive. In turbulent times like these, it’s the responsibility of artists to use their tools to create provocative pieces of art capable of instigating not just debate, but a change in the way working class citizens see the threats facing our country. The aim is to engage. The figures represented on the flags are that same ones who have risked everything to make our flag stand for something greater. We also feel that it will be a creatively fortified populace, dedicated to standing up for America and its values, that will be the leading cause of Trump’s downfall, not an FBI investigation. 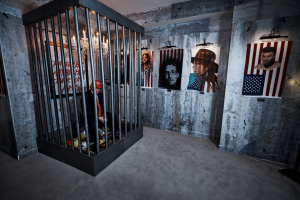 We're so curious to know how you set everything up in the room. Was it difficult bringing in the art supplies and equipment?

The installation materials, tools, flags and hardware arrived with the activists at the time they checked in. The hotel staff quickly loaded all of the suitcases onto their luggage carts and transported them directly to the room without asking any questions. The only comment that was made was inside of the suite when a bellman referring to the weight of suitcase, jokingly asked a member of INDECLINE if he had his “dead girlfriend” stuffed inside of it. That was the full extent of getting about 90 percent of the assets into the property undetected. A separate suitcase with the rats was smuggled in the middle of the night once the rats were all procured from the streets of Brooklyn.

How long do you plan on keeping the exhibit? Has anyone from the Trump hotel asked you to remove it yet?

The installation was only up for four hours (6:00pm-10:00pm). It was built from 4:00pm on the 29th to 5:30pm on the 30th. Once the last media outlets left, the room was completely returned to normal. Reference photos were taken before the installation and used to ensure the room took on the exact appearance that it had prior to our arrival.

How did you find the rats?

We spent three nights in Brooklyn catching the rats with a small, non-threatening rat trap. The rats were released once their work in the installation was done. 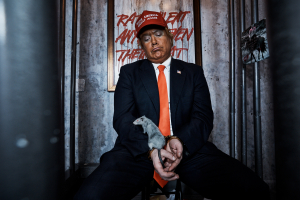 How many rats did you catch?

We caught six rats in total.

The rats weren’t a critical element, but being that President Trump has proven himself time and time again to be the world’s biggest rat, we felt it necessary to imprison him with his own breed.

Why is art so important in political activism today?

President Trump is the embodiment of every single unethical and arrogant American value there is. He is our generations Richard Nixon and he’s waged a war with millions of creative and fearless soldiers who regularly engage in tactics of provocative protest, poetic dissidence and rebelliousness. His very existence serves as a call to action to resist and creatively fight his policies and administration no matter what the cost. There is no alternative. Bridging the gap between art and political activism is one of the strongest methods of communication there is. These projects, although provocative and sometimes illegal, aim to inspire, educate and encourage others to join the fight against Trump, his policies and fanatical followers.

What was most exciting about this protest? What was the scariest part?

As always, the most exciting part is fleeing the scene, especially in this case, having utilized the hotel staff without their knowledge to support and assist with the project. We’ve faced a number of high-risk situations over the 17 plus years INDECLINE has been active, but this particular project was very low stress and yielded a high reward. We even listened to “Little Red Corvette” by Prince and had a dance party in the room once we wrapped up.

Watch a video on the making of the art exhibit here:

The People's Prison from Indecline on Vimeo.