Trump’s transgender ban is senseless, intolerant, stupid and wrong, and it won’t work 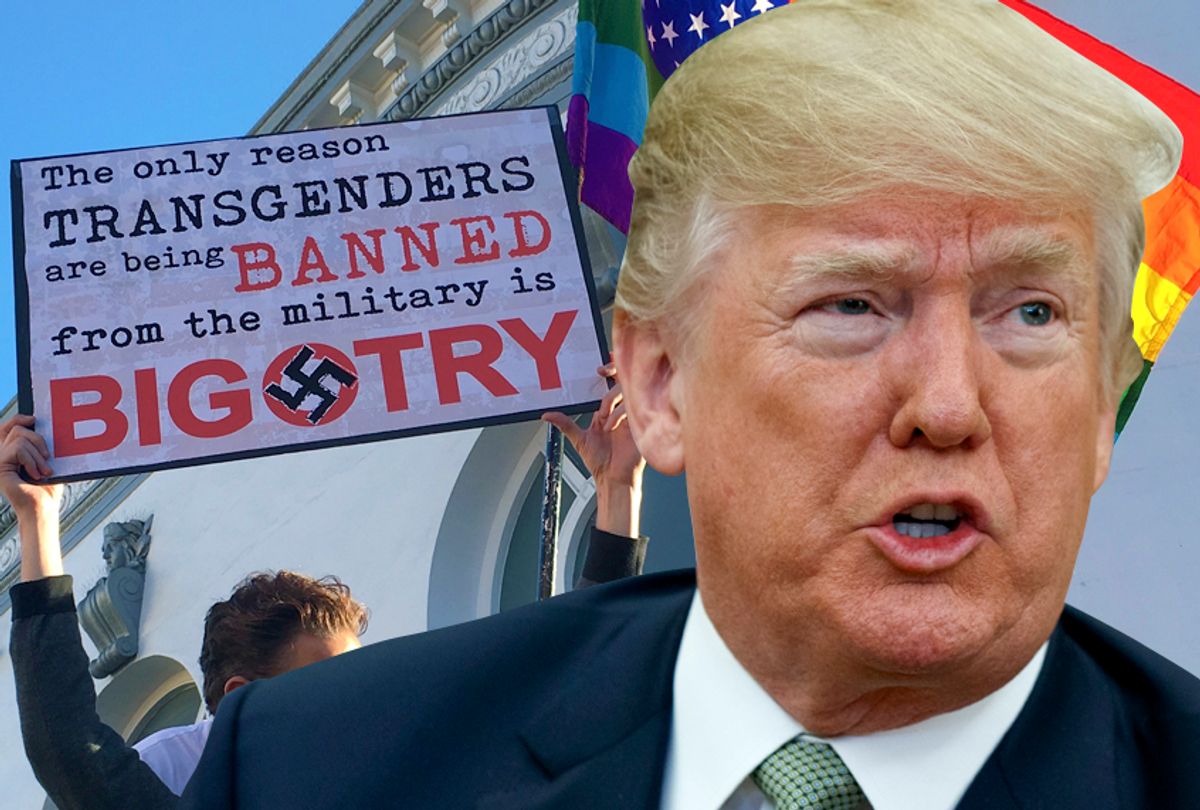 Let’s do it this way: Imagine you’re a teenager again. You grew out of your last pair of sneakers in six months. The hems on those cool distressed jeans you saved up for with your job at the pizza place are up around your ankles.

Now imagine you don’t feel like a guy inside, you feel like a girl. You’ve felt that way since you were in kindergarten. In grade school, you played shoot-'em-up video games with the other boys, but you also went on eBay looking at vintage dresses and handbags. Your mother noticed you were “different,” and you were really close to her, so you let her in on your secret and told her how you felt inside, and after a while you told your father, too, and you are lucky, because they completely understand you and accept you the way you are.

By high school, your friends know, too, and they’re cool with it. It’s the age of “Transparent” and “RuPaul’s Drag Race” after all. You even started doing makeup tutorials and posting them on YouTube. One of them went mildly viral, and now you’ve got a couple thousand followers on Instagram, where you show off the vintage costume jewelry and handbags you collect. You started living full time as a girl last year, when you were a junior. For the first time, your life felt complete.

You’ve got another Instagram account where you post clips from the airsoft battles you engage in on the weekends at the airsoft battleground place. You’ve been into airsoft since you were in junior high. You’ve collected all the gear — an airsoft M-4 carbine, and the camo, and the tactical face shield and helmet and tactical gloves. Every cent you earn at the pizza place that doesn’t go into makeup and handbags and jewelry on eBay goes into airsoft.

Because here’s the thing. You were born with a guy’s body and a girl’s soul, and you were also born a patriot. It came down in your family. Your grandfather fought in Vietnam, and your dad was in the Air Force and was in an armored cavalry battalion in Desert Storm, and your uncle is in the Navy serving on an aircraft carrier in the Gulf. You feel equally at home in a pair of combat boots and a pair of four-inch heels. Over at the sheriff’s firing range, you can out-shoot most of the guys on the Practical Shooting Course. One of your friends you met at the firing range last year came home from the Army on leave before he ships out to Afghanistan. He’d been to Airborne and Ranger schools. He’s in the 82nd Airborne Division, and he said with your skills on the range, he could fix you up to get on track for the same training he qualified for.

In fact, you had already made plans to enlist as soon as you graduate from high school later this year, but now this new transgender policy came down and everything is up in the air. You are a patriotic young American who wants to serve in the armed forces to support and defend the Constitution of the United States of America, but President Trump has put that on hold while no less than four court cases challenging his original transgender-ban-by-tweet last July make their way through the courts.

The policy is a mess. Even as it “grandfathers in” nearly 9,000 transgender troops presently serving in the military, the policy forbids enlistment to people “who require or have undergone gender transition.” The policy also says that “transgender persons without a history of diagnosis of gender dysphoria, who are otherwise qualified for service, may serve, like all service members, in their biological sex.”

Like “all service members?” What about the 9,000 transgender troops currently serving? Are they part of “all service members” or aren’t they? And what’s this stuff about “gender dysphoria?” The Pentagon announced that of the 9,000 transgender troops currently serving, 937 of them had been given a diagnosis of “gender dysphoria.” What about them? Will they be allowed to continue to serve, or will they be kicked out?

“They’re also basically saying that if you keep quiet, we’ll leave you alone,” Brad Carson, the former Defense Department acting under secretary for personnel and readiness during the Obama administration, told the New York Times.

That’s “don’t ask, don’t tell” all over again. It didn’t work last time, and it won’t work this time. The only thing that the failed “don’t ask, don’t tell” policy did was turn gay service members’ lives into a living hell. That was until the policy was lifted, and eventually overturned by federal law. At which time gay people who were serving honorably in the Army, Navy, Air Force and Marines continued to serve honorably. And openly.

All of the breast-beating and Bible-thumping that went on before — the crazed warnings that if you allowed gay people in the military, they would “ruin good order, discipline, and morale” — it all just went away, and gay people continued to serve in the military as they always have, with one simple difference: they could serve openly.

You can probably tell that my feelings about this issue run deep. That’s because when I was at West Point back in the 1960s, I had gay classmates who came out to me. I knew they were gay, but I didn’t tell anyone about them. They graduated and were commissioned into the Army. They went on to serve honorably, just like the rest of my West Point classmates. Today, many of them are married and next year will attend our 50th reunion with their husbands. It won’t be any more remarkable than me showing up with my girlfriend, or a classmate of mine who lives only a few miles from where I write this showing up with his wife. I had gay soldiers serving in the mechanized infantry unit I was in at Fort Carson, Colorado. They had either been to Vietnam or were on orders to Vietnam. I knew who they were, and so did others. It didn’t make any difference that they were gay then, nor does it make any difference that they are gay veterans now. They were honorable men. They served honorably. They deserve our thanks and respect.

Trump is trying to use the same bullshit arguments against transgender people that were used against gay people when they passed “don’t ask, don’t tell” back in 1994. Secretary of Defense James Mattis asserted in his order against transgender troops that allowing them to serve “could undermine readiness, disrupt unit cohesion, and impose an unreasonable burden on the military that is not conducive to military effectiveness and lethality.”

Somehow a gay soldier firing a rifle  at an enemy soldier would lack the “lethality” of a straight soldier, as if the bullet exiting the barrel of the gay soldier’s gun would not find its target because of its inherent gayness? Is that what Mattis is saying?

Back in 1966, my father was a battalion commander in the 9th Mechanized Infantry Division. He was stationed at Fort Riley, Kansas, getting his battalion ready to be deployed to Vietnam. It was about three weeks before they were scheduled to load up their M-113 armored personnel carriers on a train and send them to San Francisco and load them on ships, along with the soldiers in his battalion. He was awakened one night by a phone call from a police station downtown in Manhattan, Kansas, just off the Fort Riley post. A second lieutenant in his battalion had been arrested for wearing women’s clothes outside a local bar. My father told me the lieutenant was the best platoon leader in his entire battalion. His platoon had won a combat training exercise waged against another battalion in the division. He was scheduled to be promoted to first lieutenant in a couple of months. He was that good.

My father got out of bed and drove downtown and bailed the lieutenant out of jail. He took the lieutenant back to his own home and sat him down in the living room and asked him what was up. He was sitting there in my father’s living room at 2 a.m. in makeup and a wig and women’s clothes. He told my father he had been getting dressed up in women’s clothes since he was a boy. If things were different, he said he would live as a woman all the time. My father asked him if he thought he could go back to his company and continue to lead his platoon and take them into combat in Vietnam. The lieutenant said he could, and he wanted to do exactly that.

So my father took him back to his car, which he had left downtown, and told him to go home and get ready for work. My father drove to the police station and talked to the police sergeant who was on duty and told him the lieutenant was on orders for Vietnam, and there were only a couple of weeks until he would be on a ship headed over there, and would he consider forgetting the arrest and letting him go. The police sergeant did that.

The lieutenant took his platoon to Vietnam. My father’s battalion was assigned to the Mekong Delta. The lieutenant led his platoon honorably and well. He was wounded in action and received a Bronze Star with V Device for heroism in action. He was the best platoon leader my father had in his battalion.

There were probably thousands of other soldiers just like that lieutenant serving in the military at that time, just like there are thousands just like him serving today. There is something inherently cruel about a policy that refuses to recognize that just because you’re transgender doesn’t mean that you can’t also be a patriot who wants to serve your country.

These days, as it was back then, that means signing up to serve in a military that is at war. Such a policy was senseless, intolerant, stupid and wrong when it was used to ban gay troops, and it’s senseless, intolerant, stupid and wrong when it’s used to ban transgender troops. Trump should stop pandering to his fundamentalist Christian base and start listening to soldiers, sailors, airmen and Marines. They know, because they have served alongside gay and transgender troops who are wearing this country’s uniform and serving honorably and bravely all over the world.