The Skripal snafu: Whose interests are served by confrontation with Russia?

Theresa May is pushing a global showdown with Moscow over a shadowy poisoning case. Who stands to gain from this? 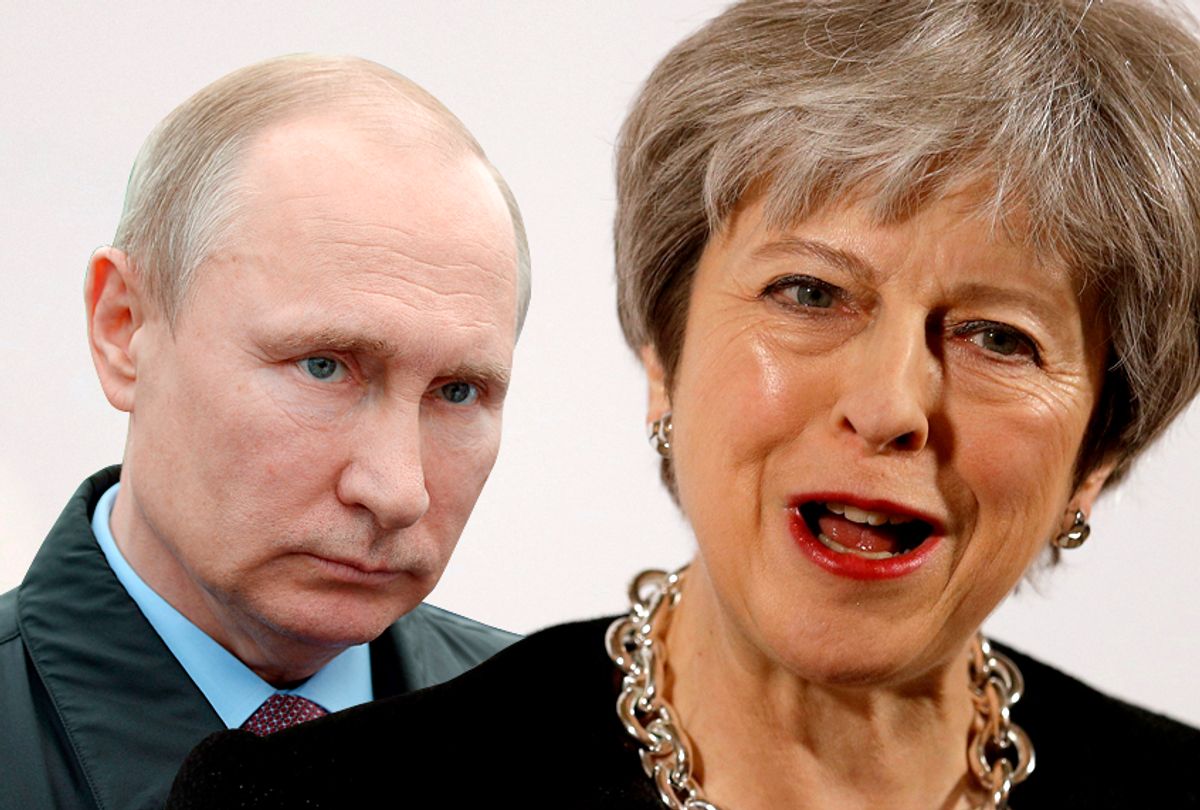 Britain, the United States, numerous Continental allies, Canada, Australia and even NATO piled on the Skripal case this past week beyond the worst fears expressed in this column just after the March 3 incident occurred. Diplomatic expulsions, recalled ambassadors, incessant threats of more to come: It starts to look as if a coordinated, full-dress offensive against “Vladimir Putin’s Russia” — a nation that lives vividly in many Western imaginations but is not to be found on maps — is underway. In the column just cited, I suggested “a possibly fateful confrontation” may be in the offing. I wish I could apologize for misreading events. But alas, no.

At this writing it looks as if roughly 140 Russian diplomats have been expelled from 22 nations. Many of these were token gestures: The Scandinavians other than Denmark stayed to one expulsion each, as did most Eastern European nations. The Australians (and the Danes) went as far as two, the Canadians four. Lesser nations — Slovakia, Malta — pulled back their ambassadors from Moscow “for consultations.” Then we have NATO, which rarely misses a chance to make the world less stable. It announced Tuesday that will cut Russia’s permanent mission to the treaty organization from 30 to 20. Wise. Measured and reassuring.

I cannot but assume there is more of this incautious stuff to come, and soon. England and Iceland said last week they would not send official delegations to attend the FIFA World Cup soccer matches to be held in Russia this summer. “Among the measures taken by Iceland is the temporary postponement of all high-level bilateral dialogue with the Russian authorities,” the Reykjavik foreign ministry announced. This seems to me a possible signal that the Western alliance may make sabotaging the World Cup its next big propaganda move against Russia. We will have to see. Ditto in the case of NATO. It already plans a summer of exciting hostility, and I will return to this topic.

(On Thursday Russia announced that the U.S. consulate in St. Petersburg — a big one, pretty key — will have to close. This is Moscow’s first substantive response to the week’s developments, though almost certainly not its last.)

It seemed clear after an attempt on the lives of Sergei Skripal and his daughter, apparently by way of a nerve agent, that Prime Minister Theresa May risked serious overexposure as she escalated the incident into a London–Moscow crisis within a matter of days. Nothing was proven, everything flimsily reasoned. No one has seen samples of the agent other than British authorities. No one has explained how, within a couple of days, a Defence Ministry laboratory could identify the agent unless it had samples in its inventory. The possibility that MI6 was responsible for the Skripal attack, given his double loyalties on the dark side, is plausible by the most basic logic. But it was cordoned off until a senior Russian official, reflecting Moscow’s impatience, raised it last week. Russia’s repeated offers to assist in the investigation became, especially in British media, Russia’s repeated refusals to cooperate. The Brits seem to have lost their touch when it comes to put-up jobs. This seems one of their worst.

It may be that the not-especially-competent May got carelessly out in front of herself as she authorized the first expulsions of Russian foreign service staff. It may be that the French, Germans and Americans lined up an extensive alliance behind the British to save the May government from self-induced embarrassment. But what followed last week suggests something else. Given the evident coordination of the rapid-fire wave of expulsions, we are left to question whether the Skripal incident was not extensively planned among the leading Western capitals as an intentional provocation. This is Moscow’s argument now, in any case.

We cannot know, and sentences with conditional verbs deserve only so much space. Let us move on to certainties. I have three to propose.

One, we all ought to be fearful as we watch the Skripal case build on the basis of nothing because it represents a serious breach of the principles we depend upon for protection against the unprincipled use of authority. I am thinking of due process, the presumption of innocence until guilt is proven and -- at the far end -- the right to dissent. On display are serious abuses of all three. What do the governments involved think of these principles, we must ask? I would suggest the same question concerning international law, but we have known for many decades that the answer in this case is “Nothing, unless it is convenient to our objectives.”

Two, I find Iceland’s announcements last week especially revealing of our current circumstance: They come just as American liberals busily lionize Katrín Jakobsdóttir as the island nation’s Resistance-certified “left-wing” prime minister, a kind of ideal to which we all ought to aspire. This should remind us of something critically important: There is no serious opposition — certainly not among Americans, and I see little evidence of any elsewhere — to the Russophobia that reigns across the West. This is getting dangerous in view of the gathering momentum of the past week. American liberals now find compulsive contempt of Russia and its leader a convenient way of mending the rift between the Bernie Sanders and Hillary Clinton wings of the Democratic Party: Let us unite in our xenophobia and incomprehension.

Three, the Pentagon has chosen this occasion to begin detailing its plans for NATO to prepare a range of air, land and sea forces for rapid deployment against “Russian aggression.” Last year, you may recall, NATO forward-deployed 4,600 troops in Poland and the Baltic states. These we do not call “NATO aggression” despite their reckless proximity to Russia’s western border, because, as we all know, the West does not aggress. But Defense Secretary Jim Mattis has never considered this force enough. His new numbers, urged upon NATO as we speak, are these: 30,000 rapid-deployment troops, supported by 30 naval vessels and 360 warplanes of similar status. He will ask for agreement on these numbers at the NATO summit set for this coming July.

If I read the past week correctly, we witness the start of a sustained campaign to force Russia into a condition of diplomatic isolation. This may be correctly viewed as a response to the failure of economic sanctions to cripple the Russian economy, given that Russian GDP is now once again expanding, but that is not the point. As spring turns to summer we are also to watch as NATO once again pushes the degree of tension along Russia’s frontier to a still higher degree of danger.

Are these matters a prelude to events disastrous enough to get their own chapter in the history books? Things unfold incrementally, one bit of bad news at a time, leaving us disinclined to think in these terms. We should resist this tendency. Moments such as this have turned into disasters often enough in the past.