Stephon Clark's shooting is starting to follow a clichéd script

A young man shot dead. Shady actions and suggestions of a cover-up. Protests. You've heard this story before 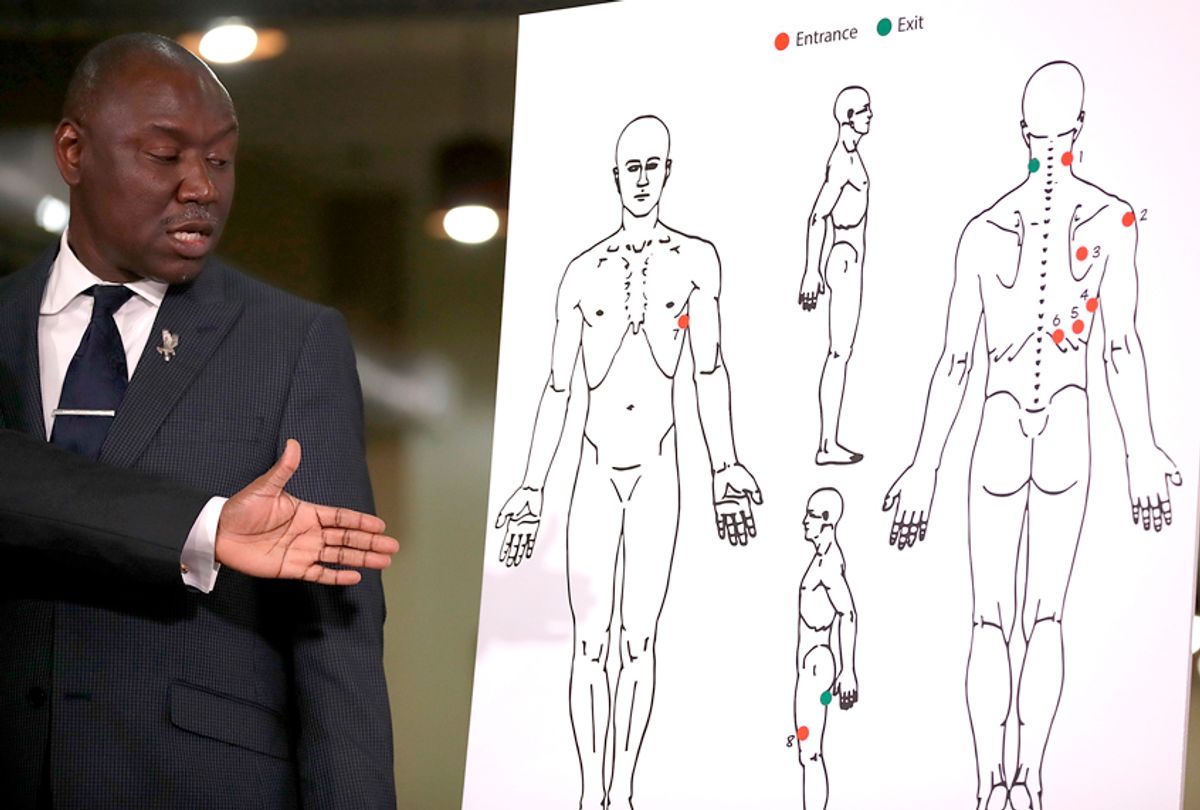 Attorney Ben Crump looks at a diagram showing gunshot wounds to Stephon Clark during a news conference at the Southside Christian Center on March 30, 2018 in Sacramento, California. (Getty/Justin Sullivan)
--

In America, police officers get to chase black people down like animals. They're allowed to shoot them in the back like animals and then tell a jury of people who believe it when they say they simply acted out of fear — as if that’s a justifiable reason for taking an unarmed person’s life. The police officers in Sacramento, California, haven't yet used this overused defense, but it's more than likely they will. It's more than likely that they'll be excused for their actions, again.

It's happened too many times.

Stephon Clark, age 22, was gunned down by officers in his grandmother’s backyard on the night of March 18. Officers responded to a 911 call of someone breaking car windows. According to ABC News, deputies in a helicopter reported seeing a man with a “toolbar” – and directed the officers there. There’s no report that any such implement was found. Clark did have a cell phone, which police thought was a deadly weapon.

In the aftermath of Clark's death, another familiar pattern emerged. Body camera footage, released three days after the shooting, featured no audio after the shooting, leading to suspicion that the cops may have tried to cover something up. Such a camera shutoff would likely be in violation of department policy: the city has 16 instances in which the camera needs to be activated, and officers do have some discretion to turn the camera off, but there's nothing in the policy about muting the recording. So why was it muted?

Sacramento Mayor Darrell Steinberg addressed this problem with an unsatisfying answer on Friday, saying, "I think it's a policy we should look at very carefully and perhaps change entirely.” Shortly after that, new developments surfaced from the results of Clark’s family's private autopsy.

According to the New York Times, it took between three and 10 minutes after the shooting for Clark to die — raising the question of why the police didn’t do a better job of getting him the medical attention that could have saved his life.

"Stephon Clark received eight bullets. Six of the bullets . . . exhibited gunshot wounds of entrance in the back, meaning he was shot in the back six times." Dr. Bennet Omalu, hired by Clark’s family to conduct a second autopsy, said at a news conference on Friday. Each of those bullets possessed "a fatal capacity," Omalu concluded. "Meaning that, out of all the seven, all he needed to have died was just one of the seven."

The Clark family hired Benjamin Crump, a lawyer who has represented families of victims of high-profile police shooting all over the country.

“These findings from the independent autopsy contradict the police narrative that we’ve been told,” Crump, the family’s lawyer, said in a statement. “This independent autopsy affirms that Stephon was not a threat to police and was slain in another senseless police killing under increasingly questionable circumstances.”

Like the families of Michael Brown, Freddie Gray and Walter Scott­­, the Clark family is about to go through a whirlwind of sensationalistic media coverage, goofy opportunists and strangers who try to define their son or brother in any negative way possible, in order to preserve the police-hero narrative. We’ve seen this too many times and unfortunately justice doesn’t always prevail.

I can’t help but look at that picture of Clark peacefully lying on the couch with his children and mourn for them because they don’t have a father now. At the risk of repeating what has been said too many times, if he had been a white man, we probably wouldn’t be having this conversation.