Trump's attorney general says his "quotas" are about efficiency. They're actually part of a much larger plan 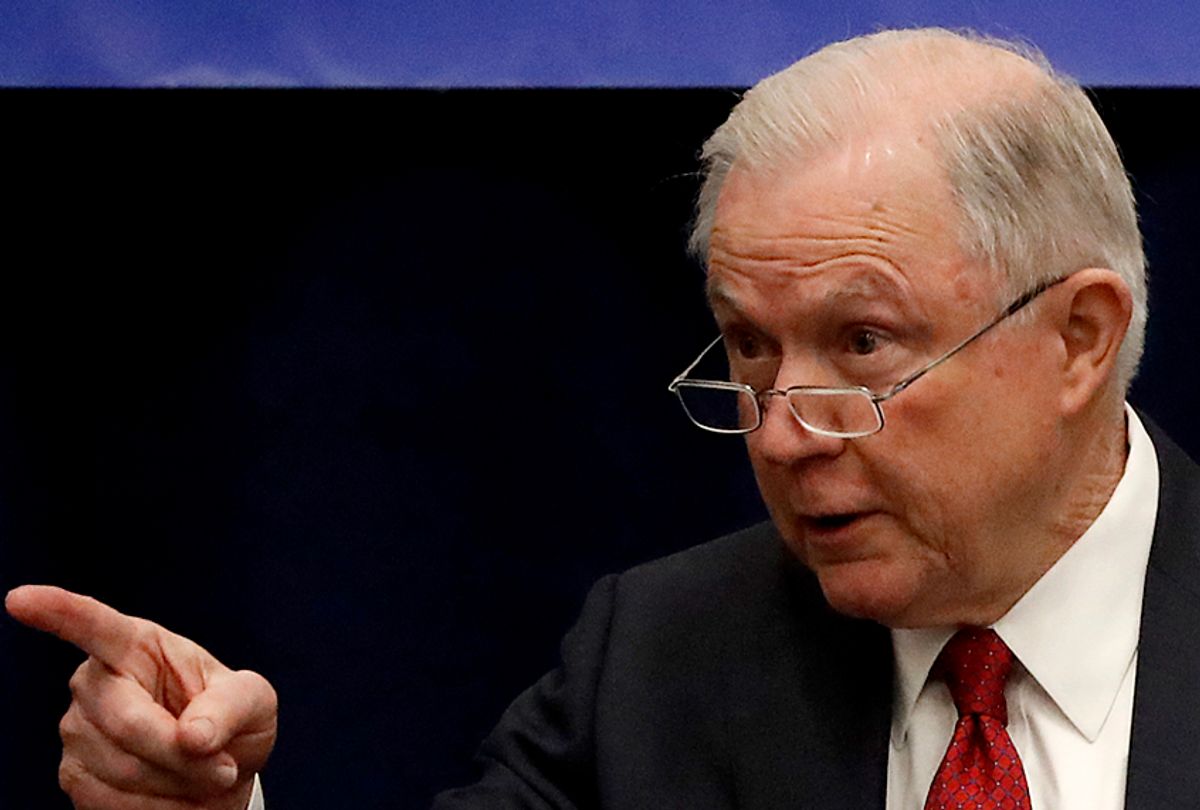 While Donald Trump seems unable to understand even the basics of his own immigration policies, his attorney general, Jeff Sessions, has demonstrated himself to be highly competent at translating his boss' incoherent racism into effective policy. He did so last month by drastically undermining the rights of asylum seekers to have their cases heard before immigration courts. This month, Sessions' assault on the immigration system is disguised as a benign request for greater efficiency.

There is a long backlog of possible deportation cases before immigration courts right now, with 600,000 cases pending and only 334 judges to hear them. It's a situation that is bad for the judges themselves, and worse for the thousands of immigrants who will wait years for a fair hearing as to whether or not they can stay in the United States or not.

"Since the creation of the Department of Homeland Security, in 2002, the increase in resources allocated for border security and immigration policing has always significantly outpaced funding for the courts," Jonathan Blitzer of the New Yorker explained in 2017. "As more and more people have been arrested, detained, and ordered deported, the courts have remained understaffed and underfunded."

There are a few obvious solutions to relieve the pain. Ideally, the Trump administration would drastically downscale efforts to hunt down undocumented people — say, by abolishing ICE — but of course, that cuts against his administration's core agenda. Another option would be to drastically increase the number of immigration judges on the payroll. The Trump administration has suggested doing that, drafting a proposed budget that provides $40 million for more judges. But that number is dwarfed by the billions Trump has demanded to increase round-ups of immigrants who may be undocumented, which suggest that any new judges will be just as swiftly overwhelmed as the existing ones.

Instead of humane solutions, Sessions has instead announced a new quota system under which where, as CNN reports, immigration judges will be evaluated based "on how many cases they close and how fast they hear cases."

Sessions is framing this move in terms of efficiency, saying, "These performance metrics ... are designed to increase productivity and efficiency in the system without compromising due process." Both the judges union and immigration activists disagree, saying the obvious point of quotas is to compromise due process, with the clear purpose of deporting as many people as possible.

"There’s no way to understand this announcement by the Justice Department other than that they want to shortcut the process in order to increase removal orders,” said Tom Jawetz, the vice president of immigration policy at the Center for American Progress.

As Jawetz told Salon, there are a number of good reasons why a particular immigration case can take a long time. For instance, immigrants accused of being here illegally "do not have access to the federal rules of evidence," and it takes longer to gather evidence to defend themselves. In many cases, the judge doesn't prioritize their case, because he or she knows the immigrant has a pending citizenship application in process, and wants to give that application a chance to be approved before making a deportation decision. Such immigrants often rely on judges issuing continuances of their cases to get a fair hearing — and Sessions' order will drastically incentivize judges not to issue those continuances.

In other words, this order will likely lead — as it is surely intended to -- to a rapid escalation of deportations, often of people who, given more time, would have been able to stay in the United States legally.

Sessions can do this because of the unique status of immigration judges, who, Jawetz said, "are more appropriately understood as Department of Justice lawyers than as judges," and who do not have the same degree of independence as federal court judges who have appointed by the president and confirmed by the Senate.

Sessions is clever, no doubt, and quite capable of using obtuse legal maneuvers like this to enact an agenda of ethnic cleansing-through-deportation on behalf of his boss in the White House. Trump is even more energized by this agenda than usual, after a week of spurious Fox News coverage about "caravans" of immigrants preparing to flood across our southern border. But there is some reason to suspect this whole quota scheme will backfire on the administration. That's what happened the last time a racially motivated attorney general put the screws to the immigration courts and demanded that they escalate their case closures, in hopes of shipping more people out.

In 2001, 3 percent of federal appeals cases nationwide were about immigration. But by 2004, that number had shot up to 17 percent, and a whopping 40 percent of federal appeals cases in New York and California were brought by immigrants contesting deportation orders from immigration judges. That drastic shift came after George W. Bush's first attorney general, John Ashcroft, used the post-9/11 hysteria about border security as cover to "streamline" the immigration court system by pressuring judges to close their cases faster.

One relatively conservative judge complained at the time that "the adjudication of these cases at the administrative level has fallen below the minimum standards of legal justice." Another court in Philadelphia reported "a disturbing pattern" of deportation orders against people who had a legal right to asylum in the United States.

Jawetz predicts that a similar situation could arise again: Lots of cases sloppily decided by overly rushed immigration judges, followed up by lengthy court battles before federal judges as immigrants denied due process pursue legitimate appeals. In effect this is a hostile gesture from the administration toward the federal courts, which Trump has repeatedly demonized for exercising their independent mission rather than blindly obeying his wishes.

But ultimately, the largest impact of this quota system will be felt by immigrants. Many of them have few resources to defend themselves and will be vulnerable to hasty deportation, even in cases that, in a fairer system, might have proved they have a right to make their homes in America.