The right's Parkland problem: A symptom of authoritarian parenting 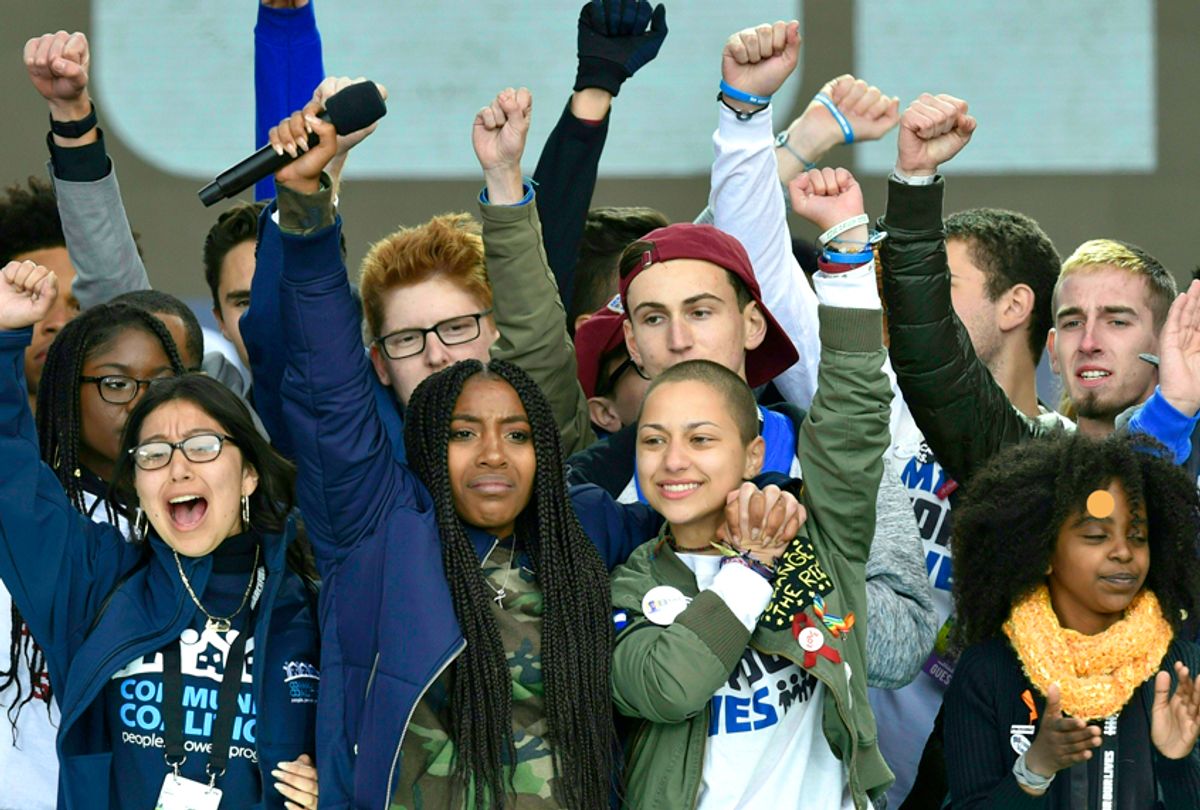 Marjory Stoneman Douglas High School student Emma Gonzalez gathers with other students on stage during the March for Our Lives Rally in Washington, DC on March 24, 2018. (Getty/Nicholas Kamm)
--

The health of a society is measured in large part by how it treats its children.

Republicans and other members of the right wing have reacted with a wide range of emotions to the survivors of the Parkland school shooting and the millions of others who recently marched throughout the United States to protest gun violence. These sentiments have included rage, anger, antipathy, indifference and total silence.

Leading right-wing media personalities such as Laura Ingraham and Alex Jones have engaged in a concerted campaign of character assassination, slurring the Parkland survivors and other young people protesting gun violence as "Nazis," or suggesting they are "attention-seeking." At the outer edges, some have inevitably suggested that the Parkland students were "crisis actors" participating in an elaborate "false flag" operation to overturn the Second Amendment. (Jones is now the target of a $1 million defamation lawsuit for publishing photos that falsely identified a Massachusetts man named Marcel Fontaine as the Parkland shooter.)

Republican elected officials have, for the most part, remained silent. They depend heavily on NRA campaign donations, and even more on the NRA's cadre of pro-gun voters. Yet they also fear the optics of publicly attacking American children whose basic demand is that they not be murdered with guns.

Although the opinions of Republican voters overall are split on gun control laws, a passionate core continues to oppose them. Those same Republican core voters also passionately support the NRA and actively pressure elected officials to reject gun safety laws.

Almost all these reactions share a unifying theme, one that is as complex as it is simple: Authoritarianism.

Authoritarianism influences parenting. Conservatives view the Parkland high school students and the other young people who marched against gun violence as disobedient and disrespectful. Hence they should be punished for their "insolence."

After the horrors of the Holocaust and World War II, noted psychologists and philosophers, including Theodor Adorno and others in what would become known as the Frankfurt School, were determined to identify the relationships between German child-rearing practices and the rise of Nazism. To that end, these scholars identified a set of traits such as deference to authority, the strong father image, and punitive child-rearing techniques that helped to prime German society for the thrall of Nazism and the Führer principle.

In the decades that followed other researchers would refine Adorno's measures and apply them to the United States. The conclusion? At least 18 to 30 percent of the American people are authoritarians. These findings resonate in the age of Trump, with one survey reporting that at least 9 percent of Americans support Nazism and other far-right ideologies. Moreover, researchers have repeatedly shown that authoritarian attitudes have increased dramatically in the United States over the last two decades, especially among Republicans and right-leaning independent voters.

One should not overlook that support for authoritarian child-rearing techniques is one of the variables that predicted whether a person was more likely to vote for Donald Trump than other Republican candidates in the 2016 presidential primaries.

Writing at Medium, psychotherapist Elizabeth Mika explains the relationship between authoritarianism, parenting and narcissism this way:

Note the narcissistic character of the authoritarian standards for child rearing: the stress on externalities  —  the outward presentation of behavior rather than its intent, and by extension the child’s character  —  and respect due an (narcissistic, because hierarchical) authority. Unsurprisingly, the authoritarian child rearing methods overlap with narcissistic parenting or, more accurately, with forms of narcissistic parental abuse where the focus is on image rather than substance, and on conformity that sacrifices the child’s own feelings and thoughts for the parental self-image.

Ultimately, for conservative-authoritarians young people are viewed as extensions of the parents' will and ego -- especially the father's. Young people's political agency is not allowed unless it is a projection of what the parents believe is right and true: Autonomy and dissent by the child are thus not permitted.

Fears about generational replacement, death anxiety, and a deep psychological and spiritual attachment to guns hold great sway over conservative-authoritarians. The mass protests inspired by the Parkland massacre activate those emotions in a number of ways.

Conservatives are afraid of being (literally) replaced by young people in America's social hierarchy. Conservative-authoritarians also possess high levels of what psychologists have described as "mortality salience." Here, a fear of death is translated into a very deep attachment to nationalism, religion and -- especially in the United States -- guns as a means of making oneself immortal.

Social scientists have shown that death anxieties play a powerful role in explaining why Republicans and other conservative-authoritarians oppose gun control laws: the gun is almost a magical fetish object that is imagined to offer its owner protection against death and other vulnerabilities. In total, millions of liberal and progressive young people marching, running for public office and otherwise participating in politics is a waking nightmare for conservative-authoritarians.

Protests, even those as large as the ones that occurred in response to the Parkland massacre, do not constitute a social movement. To create substantive political change that goes beyond symbolic action, those young people and others who want to stop the country's epidemic of gun violence will need to create an organizational infrastructure and gather the financial resources necessary to counter the death grip the NRA has on American democracy. Because the United States is an oligarchy beset by extreme wealth and income inequality, where money is now legal speech, this will be extremely difficult. In this political and social reality, mass democratic action such as protests and marches are not sufficient to create effective political change.

But if the Parkland massacre and other gun violence can be framed as a generational identity-defining event, it could become one more nail in the coffin of the Republican Party. Demographics can be destiny in politics. Given a country where older white conservative voters are dying off, black and brown people are ascendant and young people increasingly view the Republican Party and conservatism as toxic, the Parkland survivors and their allies may be the vanguard of a new and better America. Republican Party elected officials, elites, opinion leaders and voters all know this to be true -- which is why they will do anything to maintain power, even if it means subverting and sabotaging American democracy.