While working for the Kremlin-backed network RT, Kristine Frazao allowed Jones to push his many conspiracy theories 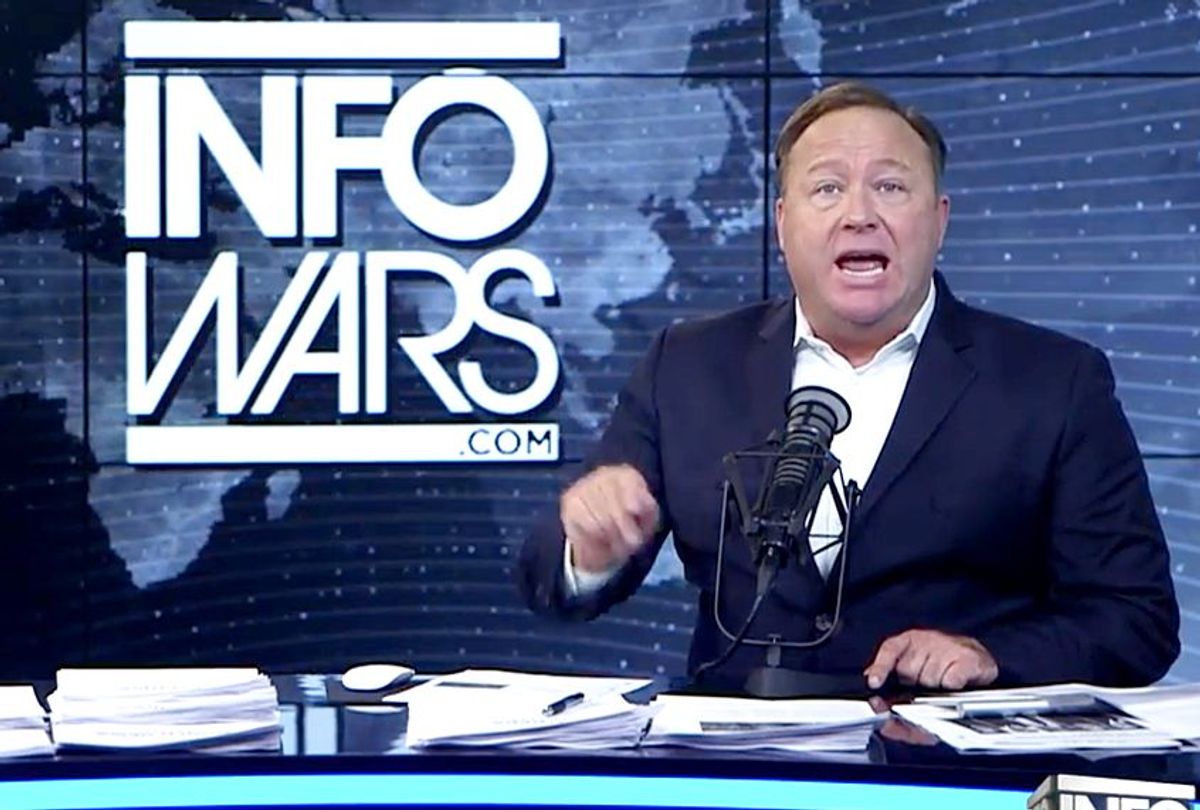 Before she became a national correspondent for Sinclair Broadcast Group, Kristine Frazao worked for the Kremlin-backed network RT (formerly Russia Today), where she interviewed conspiracy theorist Alex Jones on more than 20 occasions. During those friendly interviews, Frazao allowed Jones to push conspiracy theories about the 9/11 attacks, 2011 Norway shooting, and 2005 London bombings, among other events.

In an email to Media Matters, Frazao stated that being at RT had given her a “refreshing” opportunity to report “on less covered subjects” but said she's now “very glad” to no longer work there. She also said she had no role in booking Jones as a guest.

Frazao’s role within Sinclair and prior employment with RT have also come under scrutiny in recent days after she produced a March 21 segment in which “former Trump adviser Sebastian Gorka parroted a Trump talking point regarding the existence of a ‘Deep State’ attempting to undermine the U.S. government,” as SeattlePI.com wrote. That segment aired on at least 22 stations in 15 states, according to a Media Matters review.

Before joining Sinclair, Frazao worked as an anchor and correspondent for RT from December 2009 to January 2013. U.S. intelligence agencies and media observers have criticized the Kremlin-backed RT for airing propaganda and conspiracy theories over the years. RT was one of the early enablers of Alex Jones and his conspiratorial rhetoric (Donald Trump and his allies have now embraced the once-fringe host).

Frazao told Media Matters that when she joined RT, she "found the opportunity to report on less covered subjects to be refreshing and, ultimately, an important catalyst for my growth as a journalist. I become more familiar with different, less US-centered viewpoints." She added that her view on the network has changed, writing: "Time has shown with Russia's invasion of Crimea and the 2016 election that RT has gone in a different and troubling direction- one that does not align with most noble pursuits of our profession. I am very glad that I no longer work there."

Regarding her on-air segments with Jones, Frazao said she "did not have a role in booking Alex Jones or any other guest. We were told which guests were appearing on the shows and what the topics would be."

"I can tell you that RT had a keen interest on growing their internet audience and our producers and guest bookers knew that Alex Jones has a large online following," Frazao said. "Our producers seemed to think that because of that, his perspective was relevant."

As a contrast to her Jones interviews, Frazao pointed to work she did on RT involving civil rights for American Muslims, contaminated water because of fracking, and the suicide rate among Native Americans.

RT described Jones as one of its “frequent contributors” and regularly hosted him during the Obama administration. Though Jones no longer appears on the network as frequently, he estimated last year that he has appeared on it "200 times." Jones has claimed that he was told years ago that Russian President Vladimir Putin is “a big listener" and was previously informed that the “Russian government listens to" his show and that the Kremlin partially “modeled” RT off of his Infowars network.

As Media Matters has documented, the right-wing host has used his own program to push toxic and false claims about the 9/11 attacks and the tragedies at Columbine, Oklahoma City, Sandy Hook, Parkland, and the Boston Marathon, among others. He has also spread conspiracy theories about Pizzagate (and was later forced to issue an apology for pushing smears).

At the time of the Frazao interviews, Jones’ website referred to him as “one of the very first founding fathers of the 9-11 Truth Movement” and he had been gaining notice in the media for pushing fringe conspiracy theories.

Media Matters reviewed 22 interviews* that Frazao conducted with Jones from 2010-2012. Jones told Frazao and RT viewers that there’s a “criminal, illegitimate, foreign banking cartel that runs America and stages the terror attacks”; the United States government faked Osama bin Laden’s death; the government set up the “underwear bomber”; and 9/11, the 2011 Norway shooting, and the 2005 London bombings were “false flag” attacks.

During one interview, Frazao told Jones, “It’s a good thing, though, that you’re getting a lot of press out there. As they say, no press is bad press, and certainly your message is getting out there.” In a segment about the U.S. State Department fighting propaganda, Frazao said: “Who better to talk to about this than radio host Alex Jones.”

While talking about news that year about actor Charlie Sheen, Frazao said to Jones: “First of all, do you think that he said what he said on your show because you're not like the rest, because you give a platform for people to not have to be P.C.? And second, I’m wondering what you think about the fact that you’re being so sought out after now because of it?”

Commenting on the nature of the Jones interviews, Frazao told Media Matters she tries “to be courteous and respectful to everyone that I interview– no matter their personal opinions or mine.”

In a May 2011 interview with Frazao, Jones said that the U.S. government helped Umar Farouk Abdulmutallab, the so-called underwear bomber, get on a plane to attempt to bomb it. He then said that Osama bin Laden wasn’t actually killed in 2011 but died years before and then was frozen so he could be rolled out at a convenient time.

He later stated that there’s a “criminal, illegitimate, foreign banking cartel that runs America and stages the terror attacks or finds mindless patsies run by their MI6, Mossad, CIA handlers like Anwar al-Awlaki, the CIA lackey, and Adam the American Gadahn.” Frazao ended the segment by stating: “All right, certainly an interesting and unique perspective as always.”

In a July 2011 video, Jones said the Norway shooting that month was a “very sophisticated form of false flag attack where whether [the shooter is] a mind-control patsy or whether he believes he's acting as part of this, this Illuminati Knights Templar knighthood, it is invoking a clash of civilizations.” The segment ran with the on-screen text: “Decoding the symbols: Did Masonic psychology inspire Oslo attacks?”

During a November 2011 segment, Jones suggested that the United States government wants to impose martial law on the country.

The following month, Jones said that his sources say Osama bin Laden actually “died many years ago of kidney failure.” He then said that the government is “monitoring people that are aware that government and corporations use drills to cover-up real false flag terror attacks or frame-ups that they're going to run and time and time again since we've discovered that 9/11 had drills of the same targets being hit, 7/7 in London had drills of the same targets being hit. They do this drill business over and over and over again to cover real operations. Same thing with a Norway shooter.”