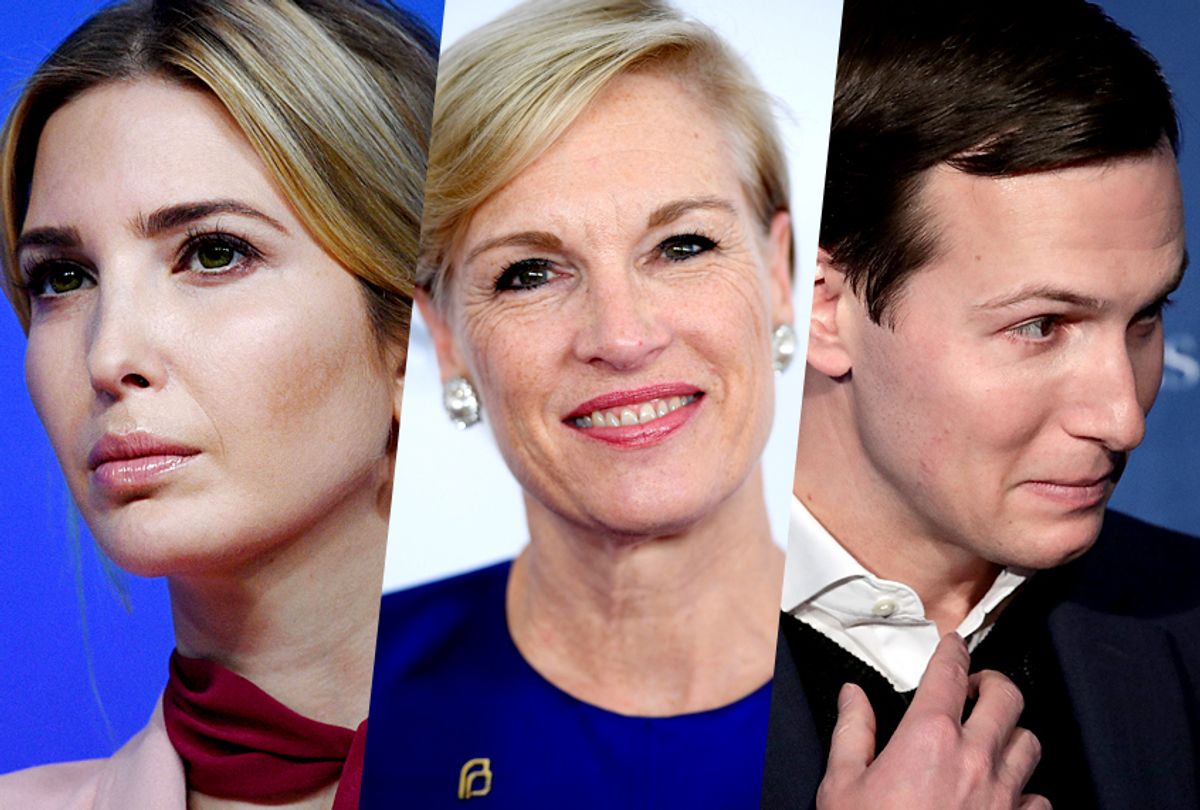 Cecile Richards, who is soon stepping down as president of the Planned Parenthood Federation of America, recently revealed the details of an interesting encounter she had with Ivanka Trump and Jared Kushner, just before Donald Trump's inauguration in January of 2017. According to Richards, the White House power couple tried to bribe her.

In her upcoming memoir, Richards claims that the first daughter and her husband, often collectively referred to as “Javanka,” partnered up to pressure the Planned Parenthood head on abortion.

The event occurred during the presidential transition in January 2017, according to People magazine, which cited a passage from Richards' new book, “Make Trouble: Standing Up, Speaking Out, and Finding the Courage to Lead.” In the book, Richards said she was hesitant to take the meeting with Javanka, but was open to finding unlikely allies within the new administration. It was a troubling time for Richards' organization, considering Trump’s newfound anti-abortion agenda and House Speaker Paul Ryan’s attack on the health care provider.

Keep your friends close, and your enemies closer, so they say.

“Jared and Ivanka were there for one reason: to deliver a political win," Richards writes, in a passage published by People. “In their eyes, if they could stop Planned Parenthood from providing abortions, it would confirm their reputation as savvy dealmakers. It was surreal, essentially being asked to barter away women's rights for more money. It takes a lot to get Kirk mad, but it looked like his head was about to explode.” The reference is to Richards' husband, Kirk Adams, who reportedly also attended the meeting.

“The main issue, he explained, was abortion,” Richards writes of Kushner. “If Planned Parenthood wanted to keep our federal funding, we would have to stop providing abortions. He described his ideal outcome: a national headline reading ‘Planned Parenthood Discontinues Abortion Services.'”

Richards writes that she explained to Kushner that there was “no way” the deal would work.

“‘Our mission is to care for women who need us, and that means caring for all of their reproductive needs — including safe and legal abortion,'” she recalls saying.

Richards also explains in her book that after her meeting with Trump and Kushner, she told the organization's executive vice president, Dawn Laguens, that the deal "felt almost like a bribe.”

“I know there are people who will disagree with me, and maybe I shouldn’t have just shut down the conversation, but I did what I thought was best.”

Richards did not cave in to Javanka's alleged demands, and it was naive for the president-elect's daughter and son-in-law, even at that early stage, to believe she might. Abortion rights have been central to Planned Parenthood's mission of providing universal access to reproductive and sexual health care from the beginning, and the organization could not plausibly give that up without destroying itself.