"Accidents Will Happen" may have started on familiar ground, but the song deployed fans to uncharted territory 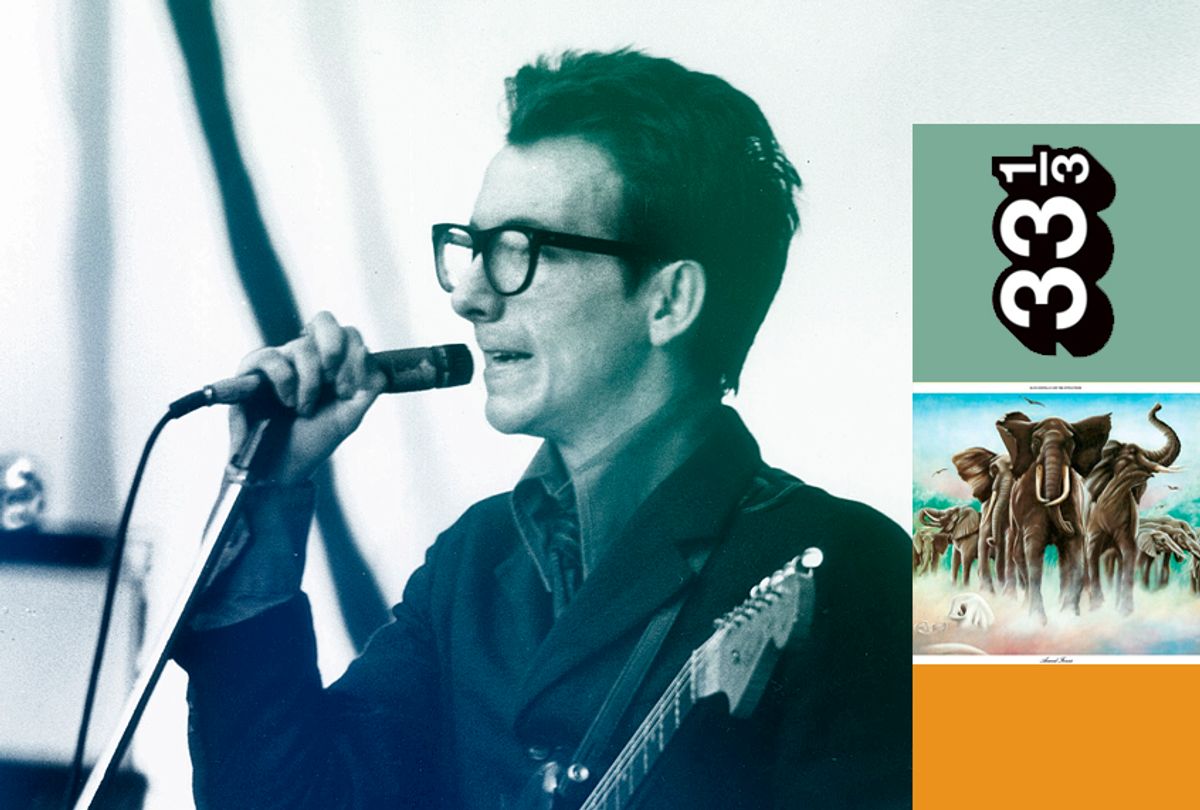 Each of Elvis Costello’s first three albums announces the singer’s presence by a snatch of unaccompanied vocal. This, we understand, conveys his urgency: He’s too keyed up to wait for a downbeat, never mind a lengthy vamp. On “Welcome to the Working Week,” from "My Aim Is True," three pickup notes (“Now that your”) rise into the guitar chords and backing vocal-group that enter on “picture”; the band comes in, tidily, a bar before the chorus. By "This Year's Model," less than a year later, he’s recruited permanent backing, but there’s no confusion about the main Attraction. “I don’t want to kiss you, I don’t want to touch”; two full bars and a hint of anticipatory bass-drum, introducing the Who-inspired tumble of “No Action.”

“Accidents Will Happen” opens "Armed Forces" with exactly one second of unalloyed Elvis; two vowel sounds (“Oh, I”), meaningless by themselves, the second broken soulfully over two pitches. There’s less time to get acquainted, and less need; by January 1979, EC’s voice and persona were known quantities to many listeners. But the familiarity of the opening tactic is a bait and switch; sonically, the track that follows bears little resemblance to his earlier releases. The band swells up around Costello’s voice instead of kicking in behind it, plunging singer and listener into a which-way-is-up murk that suits the opening lyric: “Oh, I . . . just don’t know where to begin.” After the opening phrase, the singing voice is new as well, a deep near-croon that frames the song as a “pop ballad” (though the tempo is not all that slow), sharpening into something closer to EC’s customary attack on the chorus. Around it, Nick Lowe’s production adapts Phil Spector’s reverberant “Wall of Sound” to a small combo, with guitar and organ blended and spread across the mix, later complicated by touches of dub (the rifle-crack snare at the bridge) and psychedelia (the wash of cymbals and bass in the fade, which lasts for nearly a third of the 3:00 running time). Nuances of arrangement and performance emerge only on repeated listening: The three-note ensemble figure five bars into each verse, the double-time feel and closely arranged rhythm-section patterns of the chorus. Even without picking the record apart—our purpose here—its distance from the eight-to-the-bar drive of “Radio Radio,” the band’s previous single, is unmistakable.

Structurally, the underlying song has little in common with its stated model, Bacharach/David’s 1963 “Anyone Who Had a Heart,” which slips between 9/4 and 4/4. Still, “Accidents” is the most elaborate construction Costello had so far released (with “No Dancing” from "My Aim Is True" coming in second). Each section is off-the-shelf pop-song yardage, artfully joined by chiming transitional sections and a (Bacharachian) extra measure before the bridge The dramatic major/minor shift between verse and chorus is foreshadowed by subtler chromatic motion in the second half of each verse, and recapitulated by alternating bass notes in the fade. The bridge ends with a standard V–I resolution, but its melodic descent makes a virtue of necessity, dovetailing into the third verse on “scare me so, there’s.” (Or “scare me, so there’s.”) The final chorus cycles through the chords under “I know” two extra times before resolving, as the previous choruses do not, to the tonic. “Big Boys” and “Party Girl” end similarly, but less inventively.

The first verse traps the singer in a web of earlier songs: The other Elvis’ “It’s Now Or Never,” The Supremes’ “You Just Keep Me Hanging On,” and “I Just Don’t Know What to Do With Myself,” another Bacharach/David song, which EC had covered live in 1977. The chorus adds Randy Newman’s “I Don’t Want to Hear It Anymore.” Except for the repeated Supremes line, a micro-chorus within each verse, these are supplanted by odd associations (fish/mercury) and oppositions (made up/undone) in later verses. The fade comes full circle: the repeated “I know” inverts the vowel sounds of the opening “Oh, I,” and places retrospective emphasis on “know” in the first line, chorus, and bridge. The long, singable vowel sounds also set off the harsh consonants of the verses: “check,” “collection,” the “axe” of “accidents.”

The craft is precise; the content is obscure. This is no accident: the singer knows what he’s done, but we don’t. After directly addressing the listener in the opening line, the “I” is otherwise undetected in the verses, which follow a lover to the brink of faithlessness. The chorus and bridge shift to “we”; betrayal, as Richard Hell had it, takes two. But the central line “He used to be your victim, now you’re not the only one” resists interpretation. (Not his only one, or mine? Only lover, or victim?) Determining just who’s zooming who is less relevant than the sense that these people treat one another as toys, or tools, or pronouns—anything but people. Telling someone you’ve wronged that “accidents will happen” is fairly chilly, as apologies go, though EC sings the phrase without the arch emphasis on “will” with which the phrase might be spoken.

As with the production, we’re being softened up for the ambiguities and instabilities that pervade "Armed Forces." The album’s other verbal signature, the vocabulary of politics and economics, is largely absent. Allusions to failures of masculinity (“the silly champion”) and communication (“the words that we don’t say”) are of a piece with the previous two records, and will resonate as this one proceeds. So will the intimations of physical harm—but, in isolation, these read as strong but not excessive metaphors for the emotional kind, pages torn from the lexicon of love. Or so it might have seemed to listeners who encountered the record as a single. In that form, it reached #29 in the UK, as the May 1979 follow-up to “Oliver’s Army”; in the US, it stalled at #101, the very definition of “bubbling under.”

Franklin Bruno writes on music for Time Out New York and L.A. Weekly. He records under his own name, and as a member of Nothing Painted Blue.