Trump launches a new drug war, targeting the opioid crisis — but who's the real enemy?

Trump and Jeff Sessions want to execute low-level dealers and crack down on legal marijuana. But Big Pharma is safe 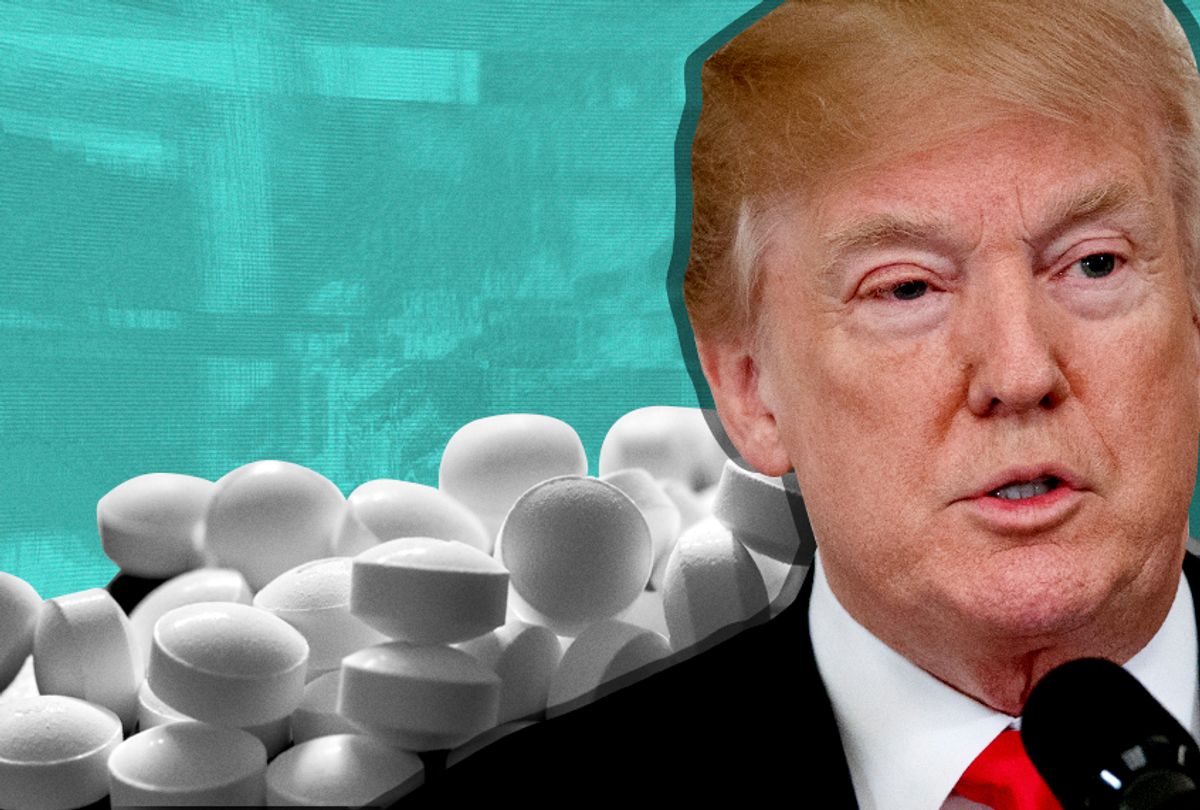 In a characteristically incoherent speech last month, President Donald Trump displayed all the signs of a wannabe despot while outlining his plan to combat the opioid crisis, which included the controversial call to execute drug dealers. “If we don't get tough on the drug dealers we are wasting our time, and that toughness includes the death penalty,” declared the president, who praised other countries where drug dealers are put to death, such as China, Singapore and the Philippines. “You take a look at some of these countries where they don’t play games. They don’t have a drug problem.”

This, of course, isn’t the first time Trump has heaped praise on the authoritarian policies of other countries or expressed his admiration for foreign dictators, whom he seems to respect a great deal more than the democratically elected leaders of America’s closest allies. On the issue of drugs, Trump has displayed a particular fondness for Philippine President Rodrigo Duterte, who is notorious for ordering extrajudicial killings of drug suspects, and who was overheard telling unemployed citizens to “kill all the drug addicts” last year.

Besides advocating the death penalty for drug dealers, the president couldn’t resist sprinkling some xenophobic rhetoric into his crazed speech, blaming Mexico and illegal immigrants for fueling the opioid epidemic. “Ninety percent of the heroin in America comes from our southern border, where, eventually, the Democrats will agree with us and we’ll build the wall to keep the damn drugs out,” declared Trump, failing to mention that the vast majority of those who misuse opioids — 11.5 of the 11.8 million opioid misusers in 2016, according to the Substance Abuse and Mental Health Services Administration — were misusing prescription opioids, not illegal drugs like heroin.

​​​​​​​The president’s tough guy act clearly shows that under the guise of getting “tough,” the Trump administration is preparing to double down on the war on drugs, which has ruined countless lives — disproportionately those of people of color and the poor — over the past several decades, while failing to reduce drug addiction. In fact, the evidence shows that the criminalization of drugs actually increases levels of addiction, while decriminalization has the opposite effect. Trump’s authoritarian approach to the opioid epidemic will no doubt please many of his supporters, but five decades of disastrous drug war policies show that it is an approach destined to fail miserably and exacerbate America’s drug problem.

While Trump’s plan is supposedly about getting tough on those who fueled the opioid crisis, in reality it is about getting tough on the victims of the drug war and opioid epidemic. Case in point: The Trump administration appears to be in the process of escalating the war on marijuana, which could potentially help opioid addicts get clean (and serve as an alternative for pain relief).

Though more than six in 10 Americans now favor legalizing cannabis, back in January the Trump administration took a major step toward cracking down on legal marijuana. The Justice Department rescinded an Obama-era policy that had discouraged the federal government from enforcing marijuana laws in states like Washington, Oregon, Alaska and Nevada, where the drug is now legal. Attorney General Jeff Sessions, who once said that “good people don’t smoke marijuana” (and joked in the 1980s that he thought the Ku Klux Klan was “OK until I found out they smoked pot”), is a lifelong drug warrior who is leading the administration’s efforts to revamp the war on drugs.

Marijuana isn’t the only plant that the administration has in its sights. In February, the U.S. Food and Drug Administration, which is led by Scott Gottlieb — a physician with deep ties to the pharmaceutical industry — declared that the popular herbal supplement kratom, which is indigenous to Southeast Asia and has been reported to help many opiate addicts get clean, was itself a dangerous opioid that has been associated with 44 deaths.

This comes more than a year after the DEA attempted to temporarily classify the plant as a Schedule 1 drug, before backing off after a major backlash. Responding to the FDA’s claims, nine leading scientists wrote a rebuttal letter, asserting that “available science is clear that kratom, although having effects on opioid receptors in the brain, is distinct from classical opioids (e.g. morphine, heroin, oxycodone, etc.) in its chemistry, biological effects,” and “does not appear to produce the highly addictive euphoria or lethal respiratory depressing effects of classical opioids.”

The last point is important, as kratom appears to be a much safer alternative to the opioids that cause respiratory depression (which can often lead to death). The FDA’s claim that the herb has been associated with 44 deaths is, at best, highly misleading. Almost all the reported deaths involved other substances or medical issues, and only one incident appears to have involved just kratom (though there is no information about the actual cause of death). Indeed, the evidence suggests that kratom, which is related to the coffee plant, is much like marijuana in the sense that it isn’t dangerous when taken in high doses (anecdotal reports indicate that ingesting too much kratom simply leads to throwing it up).

Both marijuana and kratom have the potential to help combat the opioid epidemic by providing safer substitutes for deadly opioids like fentanyl and OxyContin. Yet rather than being open-minded about these promising alternatives, the Trump administration is readying for a crackdown on both. Pharmaceutical companies (along with private prisons) will no doubt cheer this effort on, as these natural alternatives are bad for business.

Evidence shows, for example, that in the states where marijuana has been legalized or approved for medical use, the number of prescriptions for painkillers and other classes of drugs has fallen dramatically. From a business perspective, then, it was perfectly reasonable when one of the top fentanyl producers, Insys Therapeutics, donated $500,000 to Arizonans for Responsible Drug Policy in 2016 to defeat a measure to legalize marijuana in the state. Its efforts were successful.

The same company has been in the news again this year, but for different reasons. Around the same time Trump was calling for the execution of drug dealers and a wall on the southern border, multiple doctors were indicted in New York for taking part in a kickback scheme with Insys. According to authorities, Insys bribed doctors to increase the number of new patients taking their fentanyl spray product, Subsys, whether they truly needed it or not. (The spray was intended for cancer patients.)

Several months earlier the billionaire founder of Insys, John Kapoor, had been indicted for leading this conspiracy to bribe doctors (Kapoor has pleaded not guilty). Considering that fentanyl caused more deaths in 2016 than heroin, one wonders whether President Trump would also advocate the death penalty for a pharmaceutical billionaire like Kapoor -- or, better yet, for members of the Sackler family, who fueled the opioid crisis and made billions of dollars off their deadly drug OxyContin.

One suspects that the president doesn’t hold respectable billionaires who donate lavishly to his political party to the same standard as low-level dealers. Like so many things in American society, the war on drugs is and always has been fundamentally racist and classist, and since it was declared a half-century ago, people of color and poor people have borne the brunt of its devastating effects. While black people and Latinos use and sell drugs at similar rates as white people, for example, the former groups make up 57 percent of the people incarcerated in state prisons for drug offenses.

In America, wealth not only grants one instant respectability, but often exempts one in practice from the laws everyone else is expected to follow. This was evident after the financial crisis, when a grand total of zero Wall Street executives were prosecuted for the massive fraud their banks had engaged in. By contrast, a report from the Prison Policy Initiative reveals just how much poverty has been criminalized in America, finding that “incarcerated people had a median annual income of $19,185 prior to their incarceration, which is 41% less than non-incarcerated people of similar ages.”

In a recent column for the New York Times, Chris Hayes attempted to explain why this is, arguing that the “law and order” rhetoric Trump has so effectively employed since he launched his presidential campaign is more about the “preservation of a certain social order” than the “rule of law.” In this worldview, “crime is not defined by a specific offense,” but “by who commits it.”

“The history of the United States,” Hayes writes, “is the story of a struggle between the desire to establish certain universal rights and the countervailing desire to preserve a particular social order.”

The president is a reactionary, and thus his administration is not only committed to preserving the social order, but reversing any progress that has been made in the modern era — whether that means cracking down on legal marijuana, revamping the war on drugs or boosting the private prison industry. While poor people and minorities will continue to suffer under these policies, one can be sure that the super-rich folks who occupy the White House will continue to adhere to their own set of laws.