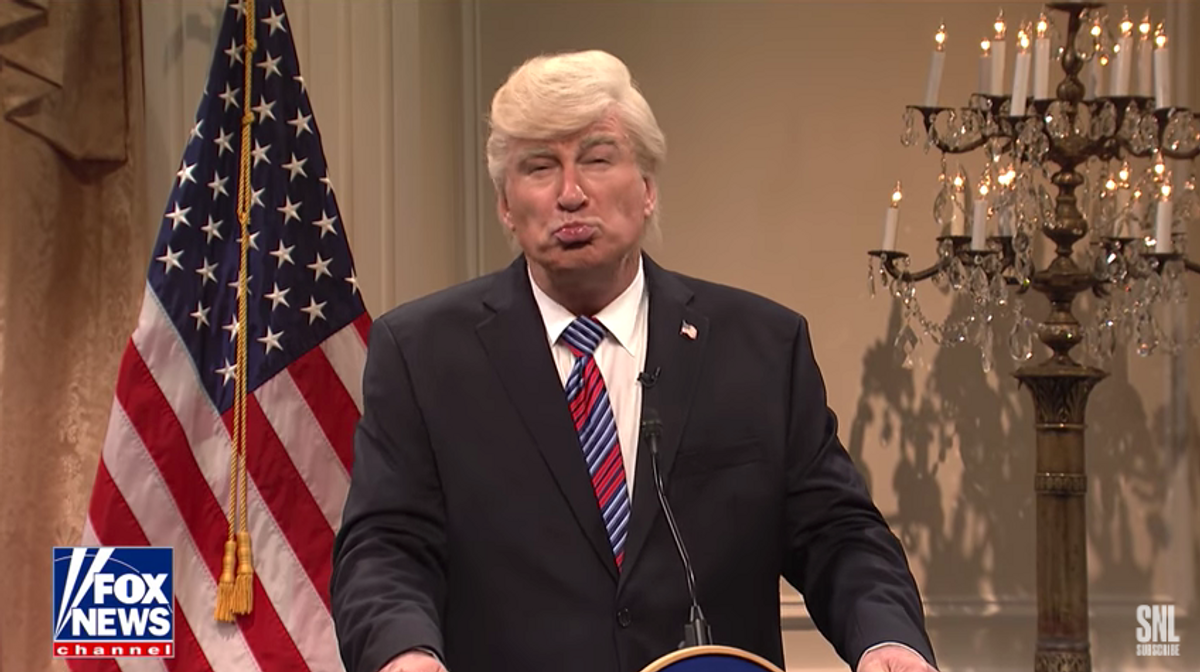 "Saturday Night Live" returned this weekend, and with it, so did Alec Baldwin's impersonation of a bored, and very distracted, President Donald Trump.

In the skit Trump attended a press conference with leaders of the Baltic states, or as he said it, "Estonia, Lithuania and I want to say, Stankonia."

Baldwin's Trump made it clear that he was in no mood for the event and would instead rather be intensifying trade wars with China.

"Hello, hi, how's it going? Let's make this quick," he said. "Because I've got a lot of trade wars to escalate here, OK?"

Trump explained that along with more tariffs on Chinese products such as "fireworks and finger traps" he expelled the "infamous Chinese billionaire P.F. Chang."

Before he allowed the "freak shows" to speak, he pulled out a prepared statement to read from because he wanted "to prove that I can read." But Baldwin's Trump read aloud a note from his national security advisers that told him not to congratulate Russian President Vladimir Putin on his recent electoral victory.

Trump struggled to get through his prepared statement, which was to welcome the Baltic leaders, so he gave up and decided it was "time to freestyle."

He added, "Even though no one has been tougher on Russia than I am, including [Adolf] Hitler."

With that, he turned it over to the president of Lithuania and said, "Gypsy woman, you’re first." But as she spoke, the camera panned back to Baldwin's Trump, who had already grown irritated that he was still at the press conference.

"Oh my god, I am already so bored," he said in an internal monologue. "I wish I was watching 'Roseanne.' How great is that show? Roseanne loves me. She’s like a good Rosie O’Donnell."

Reporters fired out questions afterwards, and one journalist asked the president about his repeated public attacks against Amazon and why he hated the company's chief executive Jeff Bezos so much.

"I hate Jeff, because he’s way more mature than me and he admits to being bald so I feel threatened on two levels," Baldwin's Trump answered.

On the last question Trump took, he may have given his most honest answer to date. "Here’s the thing no one else is saying, and I’m the only one who’s willing to actually say this: I don’t care about America," he admitted.

He added, "This whole presidency is a four-year cash grab, and admitting that will probably get me four more years."