"It’s like all of a sudden, panic has set in" 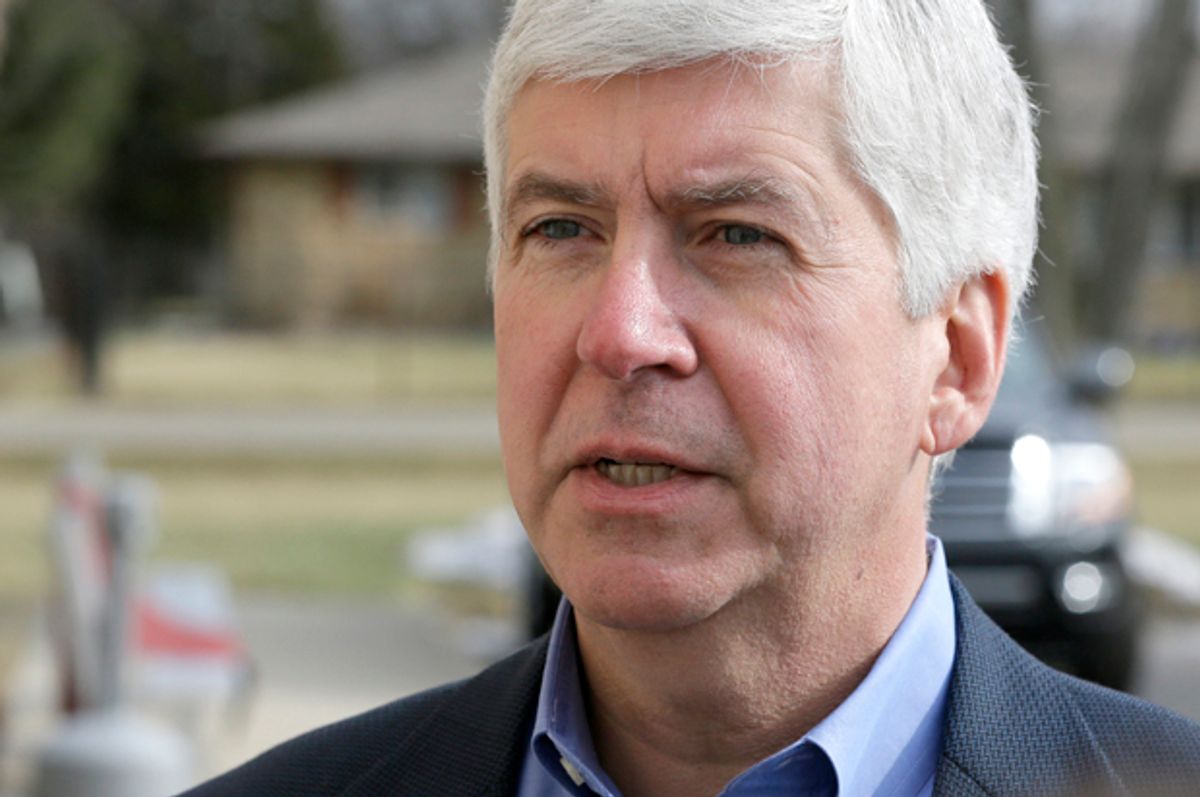 The GOP's attitude towards Flint, Michigan's water crisis goes a little something like this: Get over it, or at the very least, move along, there's nothing more to see here.

On Friday the state's Republican Governor Rick Snyder, who appointed officials who made the decision nearly four years ago to switch Flint's water source, announced the state would no longer provide Flint residents with free bottled water.

"I have said all along that ensuring the quality of the water in Flint and helping the people and the city move forward were a top priority for me and my team," Snyder said in a statement. "We have worked diligently to restore the water quality and the scientific data now proves the water system is stable and the need for bottled water has ended."

The state said the city's water quality has tested "below action levels of the federal Lead and Copper Rule (LCR) for nearly two years." As a result, Michigan's four remaining distribution centers (PODs) will no longer supply residents with free bottled water where they have picked up cases since January 2016.

The announcement was immediately met with outrage from residents and was criticized by the city's mayor, Karen Weaver, who stated she only found out about Snyder's decision moments before it was made public. "I know this is not the situation any of us want to be in," she said in a statement.

It continued, "We did not cause the man-made water disaster, therefore adequate resources should continue being provided until the problem is fixed and all the lead and galvanized pipes have been replaced. I will be contacting the Governor’s office immediately to express the insensitivity of the decision he made today and to make sure he is aware of the additional needs that I have requested for the residents of Flint."

Soon after the announcement was made, cars lined up at the state's PODs as many residents began to panic.

"This weekend the lines are so long, it’s unreal," Joyce Wilson, a 62-year-old Flint resident told The New York Times. "It’s like all of a sudden, panic has set in."

"Normally we give out whatever a family wants," Bill Guarles, a deacon of the First Trinity Missionary Baptist Church told NBC News. "But now we may have to limit that until more supplies come in." The church has handed out bottled water to residents for the past three years.

He continued, "The country thinks that the water is fine, but the residents and the city of Flint do not trust what's being said."

Despite what the state has said, there's good reason to believe the water is not safe for residents to use, and could still be contaminated from unsafe amounts of lead. It's been over 1,400 days since the city home to nearly 100,000 have had safe and clean water.

Although state officials said Flint’s water supply met federal standards, the water can still pick up lead when it flows through the thousands of lead or galvanized steel lines that remain in the city.

Flint is working with contractors to replace all of the affected lines by 2020. Just over 6,200 have been replaced so far, said Steve Branch, the acting city administrator. An estimated 12,000 could remain.

The damage caused by the Flint water crisis, and the GOP's relentless efforts to slash taxes and save the state money have left residents desperate for a viable, long-term solution.