Fleetwood Mac without Lindsey Buckingham: A sign of good things to come?

Was he fired? Maybe not. Is this good for the band? Depends on what you like 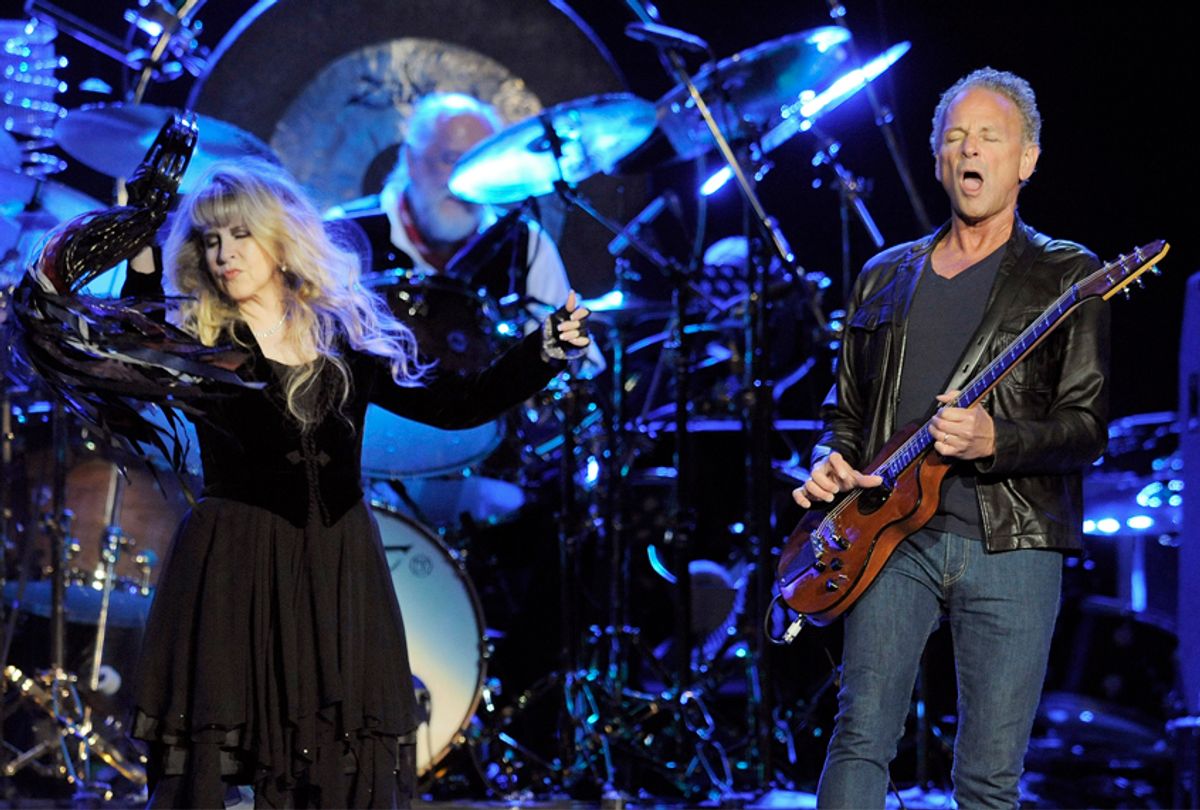 You'd be forgiven if you double-checked the calendar date after news broke on Monday that Lindsey Buckingham was out of Fleetwood Mac and was being replaced by Tom Petty & the Heartbreakers guitarist Mike Campbell and Crowded House founder/vocalist Neil Finn. Yet this wasn't an April Fool's Day prank but instead something that played out more like a Shakespearean drama.

The story bubbled up last week after ex-Fleetwood Mac guitarist Billy Burnette tweeted, "Breaking news: Lindsey Buckingham is out! New line up to be announced soon and I'm not in it????? A little pissed off but I'll get over it." Yesterday, Variety confirmed that Buckingham had left the band, and then later reported he had been fired. In an update filed last night, things grew even murkier, as it appears the split happened because he wanted to focus on solo work, and the rest of Fleetwood Mac wanted to tour.

Buckingham's departure caused much spirited debate — discussions raged with excitement, sadness, consternation, anger and confusion — although his departure wasn't exactly without precedent. After all, he also left the band in 1987, before Fleetwood Mac went on a major tour, and was also replaced by two guitarists, Burnette and Rick Vito. Yet this current lineup switch isn't a perfect analog to the situation three decades ago. If anything, it might be better.

Campbell and Nicks have a long musical history and chemistry, dating back to the early '80s, when the Heartbreakers played on her solo debut LP, "Bella Donna." The guitarist excels at hotrodding rock 'n' roll, laissez-faire twang and slinky blues, which already makes him a good fit for Fleetwood Mac. But Campbell is also an unselfish player: He defers to other instruments and musicians and is the type of artist that prioritizes songs above all. Plus, although he's not a natural lead vocalist, he also sings and possesses a Petty-esque timbre.

Finn seems like the wild card, but he too has history and a mutual admiration society with percussionist/drummer Mick Fleetwood. (Most recently, the latter added gentle percussion to Crowded House's "Don't Dream It's Over" during Finn's March 24 performance at Concert for Our Lives Maui.) The New Zealand native is an expressive, vulnerable tenor who is comfortable taking the lead or stepping back and ceding the spotlight. But he's also a seasoned multi-instrumentalist who brings acoustic and electric guitar and piano to the table. If anything, Finn is a deeply underrated, versatile guitarist who veers between delicacy and ferocity with nimble grace.

Neither Finn nor Campbell sound like Buckingham, and their (respective) onstage demeanors are also quite different. But that's entirely the point: The men aren't replacing Buckingham but are bringing their own experience and backgrounds to Fleetwood Mac and pushing the group's music forward once again. After all, there is no definitive Fleetwood Mac lineup: The only two permanent members are and have been Fleetwood and bassist John McVie. The band is a fluid entity, with touring and permanent musicians cycling in and out during every era. You might prefer a certain Fleetwood Mac lineup, but there are many iterations of Fleetwood Mac to love (or at least appreciate).

Of course, all of this isn't meant to dismiss Buckingham's talent. His songwriting, guitar work and sonic ambitions are, indisputably, crucial to Fleetwood Mac's sound and success. But it's clear that a Buckingham-free lineup won't translate to anemic concerts or song selections. For example, out of Fleetwood Mac's 18 Top 40 U.S. singles, 15 were written (or co-written) by Christine McVie or Nicks.

If anything, with Buckingham gone from the mix, Fleetwood Mac's setlist has the potential to be more interesting and varied than it has been on recent tours. For instance, during the Buckingham-free 1987 tour, the band dusted off the Peter Green-penned blues number "Rattlesnake Shake" during shows, as well as Christine McVie's "Tusk" tune "Brown Eyes."

The pre-Buckingham Fleetwood Mac also has a pile of sterling Christine McVie songs waiting in the wings — say, the organ-heavy "Penguin" cut "Dissatisfied" or the meaty "Bare Trees" barnburner "Homeward Bound." On last summer's tour with Buckingham, she played her "Mirage" song "Wish You Were Here" for the first time live. And it would certainly make sense for Fleetwood Mac now to throw in a Crowded House tune (or two) or honor Petty with a tribute. Nicks already covers (and loves) his "I Need To Know," for example.

For purists, the mere possibility of these covers existing might be anathema. In reality, however, spicing up a setlist with other people's songs hearkens to Fleetwood Mac's early days, when the band regularly covered blues, folk and soul greats. Especially during the Peter Green era, their concerts were earnest and serious, but not stuffy; the band members' youthful hunger and passion ensured their performances bristled with urgency.

In contrast, even though Fleetwood Mac's relationship drama is ostensibly long in the past, contemporary concerts still have the occasional crackle of interpersonal tension. As befitting the group's stature and talents, Fleetwood Mac's arena shows are also extremely professional, if at times a little regimented.

With this new lineup, the potential looms to highlight different facets of Fleetwood Mac's personalities and strengths. For example, Nicks' recent solo headlining tour was relaxed and low-key — and highlighted the depth of her solo catalog — while Christine McVie's songs have always been Fleetwood Mac's moral compass. Campbell and Finn are studious players but also know when a playful vibe works onstage. In fact, had Buckingham's departure been the result of a Mick Fleetwood and John McVie coup, with the idea of doing a full-circle farewell nodding to their inventive roots, it wouldn't have been surprising. Both new musicians especially align well with the energetic and chameleonic spirit of early Fleetwood Mac and are the type of agile musicians who are able to roll with the punches.

Lending credence to this theory of a throwback: As the news was breaking, Fleetwood Mac's Facebook page casually changed its profile and cover photo to be a jaunty penguin (the band's vintage logo) with an "Est. 1967" stamp. That gesture felt like a not-so-subtle reminder that although Buckingham's contributions often loom large over Fleetwood Mac, the band was founded and launched well before he joined. Although it was rumored these upcoming tour dates will mark Fleetwood Mac's road farewell, it's tough to see this as anything but a new beginning for the band.