Trump's dilemma: Punish the farmers to pump up other industries

Trump thinks American farmers will happily put up with pain for the greater good. That's not going over well 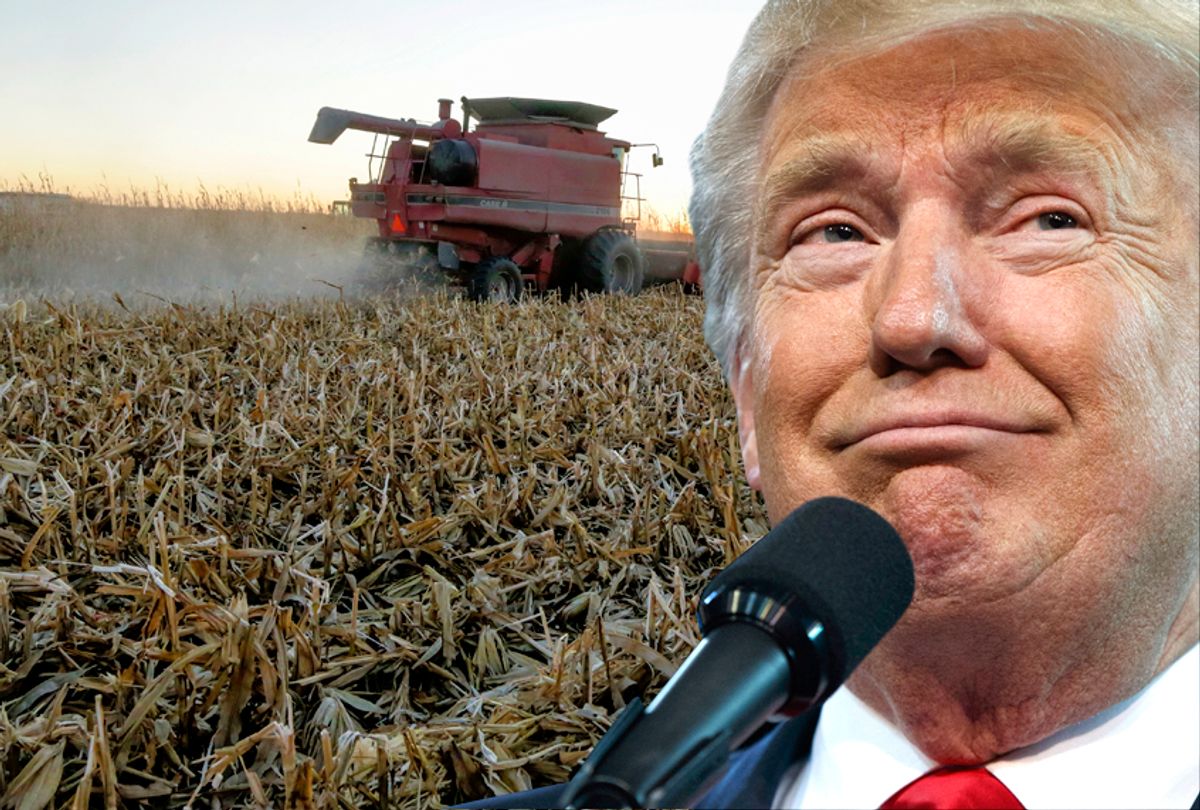 But while Trump can perhaps declare this a victory, as Fox insists he should, American farmers will be paying a big price. On Monday, the president admitted that in front of a national television news audience.

"But if we do a deal with China, if, during the course of a negotiation they want to hit the farmers because they think that hits me, I wouldn’t say that's nice. But I tell you, our farmers are great patriots," the president told reporters. "We’ll make it up to them."

He added, "The farmers will be better off than they ever were. It will take a little while to get there, but it could be very quick, actually."

It's a big reversal for the administration, which said last week that agriculture wouldn't be hurt by a trade war.

"I talked to the president as recently as last night," Agriculture Secretary Sonny Perdue said last week, according to Politico. "And he said, 'Sonny, you can assure your farmers out there that we're not going to allow them to be the casualties if this trade dispute escalates. We're going to take care of our American farmers. You can tell them that directly.'"

The idea that farmers will gladly take the economic hit in order to prop up the manufacturing industry is an idea that isn't being received well in conservative economic circles.

The Heritage Foundation, a conservative think tank that has by and large strongly supported Trump's agenda, criticized his decision to impose tariffs on China as "problematic."

"If the administration knows the fact that there will be negative consequences to any part of the domestic economy because of tariffs or any other negative trade action that will result in restricting trade, that that is a problem," Tori Whiting, a Heritage trade economist told Salon. "The administration should not be picking winners and losers in trade."

She added that the Trump administration should also not then "subsidize" those losers. Whiting explained that some of China's trade practices do violate rules of the WTO and other trade agreements and that it is "appropriate" for the U.S. to address that.

The American Farm Bureau Federation stopped short of criticizing Trump's remarks, but expressed the need for diplomatic solutions, rather than tariffs.

"The U.S. and China have a number of long-standing trade disputes. We hope and expect these can be worked out at the negotiating table without resorting to tariffs," Will Rodger, The Farm Bureau's Director of Policy Communications told Salon. "We understand there are proposals in the works to make farmers whole in the event of economic losses that might result from tariffs."

Rodger continued, "We haven’t seen those proposals, but we are open to discussing whatever emerges. Even so, we will almost always prefer an open market to government compensation. We want to protect the good, working relationships we have built over the past 30-plus years."

Experts have insisted that Xi's promises, which he described as "a new phase of opening up" the nation's economy, were merely reminiscent of previous ones and that the announcement was not likely to solve the current dispute over tariffs.

But Trump's aggressive tactics have only seemed to result in intensified escalations over trade between the U.S. and China, and experts have indicated that Xi's announcement was not much of a departure from previous Chinese trade policy.

"In China’s view, this is not a departure from its previous rhetoric," Alex He, a research fellow at the Centre for International Governance Innovation and an expert in China-U.S. relations, told Salon. "China is pursuing its agenda to further open its doors to the world to bolster its economic reform and growth. Xi Jinping’s announcement at the Boao Forum for Asia to 'significantly lower auto and product's tariff' showed China’s determination to continue as an open economy and to make an example for defending the current free trade world order."

He added: "From China’s perspective, this carefully timed announcement is more about improving measures to further open its economy and show a willingness to make concessions to the U.S. in order to avoid a trade war. However, it is likely that Trump will claim the victory as his own." Tariffs "should not be the way that the administration addresses these problems. The way to impact China" is for the U.S. to take a more international approach and "work with the E.U., Japan, etc.," through the WTO.

And that's exactly what China is trying to do.

China filed a formal complaint with the World Trade Organization on Tuesday, alleging the U.S. had violated international trade law, according to the Associated Press. The complaint came as a result of Trump's 25 percent tariff hike on steel imports and 10 percent on aluminum. China asked for 60 days of consultations with the U.S. over the dispute and threatened the "next step could be for Beijing to request a ruling from a panel of trade experts."

Experts have indicated that China's complaint shows the country is willing to support and uphold the rules of the WTO.

"China always prefers to solve its trade disputes under the framework of the WTO," Alex He explained to Salon. "It seems China believes that President Trump used the excuse of national security to impose its tariffs on steel and aluminum. This constitutes a serious violation of the non-discrimination principle of the WTO."

He continued, "By submitting a complaint against the U.S. through the WTO, it demonstrates China’s willingness to defend the WTO rules while also safeguarding its country's interests.

An outcome for the case, however, is still too early to predict, Alex He explained, because of "the lengthy process of similar WTO cases and the many complicated legal issues" involved.

Trump has instead claimed that the WTO has treated the U.S. "unfairly" and has threatened to hit China with another $100 billion in additional tariffs. That threat comes after a $50 billion tariff increase against China from earlier this week was countered by the nation with the same response towards U.S. goods.

The People's Daily, the official newspaper of China's Communist Party, also pushed back on the notion that Xi's announcement to lower auto tariffs was a concession by the leader. "These measures are based on our consistent policy and stance, our own development and our own pace," a commentary piece read.

"Linking China's strategic choice to the current China-U.S. trade frictions" was instead a "baseless interpretation."

Trump's endgame is still unclear, but minutes after he acknowledged the possible blowback U.S. farmers would feel, he seemed to suggest he may cut a deal with China after all.

"Probably we will," Trump said of a potential agreement. "I think deals will be made."

In reality, the ongoing trade dispute is "more like a game of chicken," Alex He explained to Salon. "It seems like both sides are testing who can withstand the greatest amount of pressure. The question is who will back down first? Negotiation and compromise are the only way to solve this trade dispute and avoid a trade war. The most important factor in determining who will be the winner will be based on which side can better tolerate the losses politically."

He added, "I think Trump believe his 'maximum pressure strategy' and the tough approach towards China worked, instead of looking at the larger picture and seeing the true dangers of a trade war if the threats progress into reality."