In Iraq, Afghanistan and Syria we spend dollars and leave behind bodies and rubble 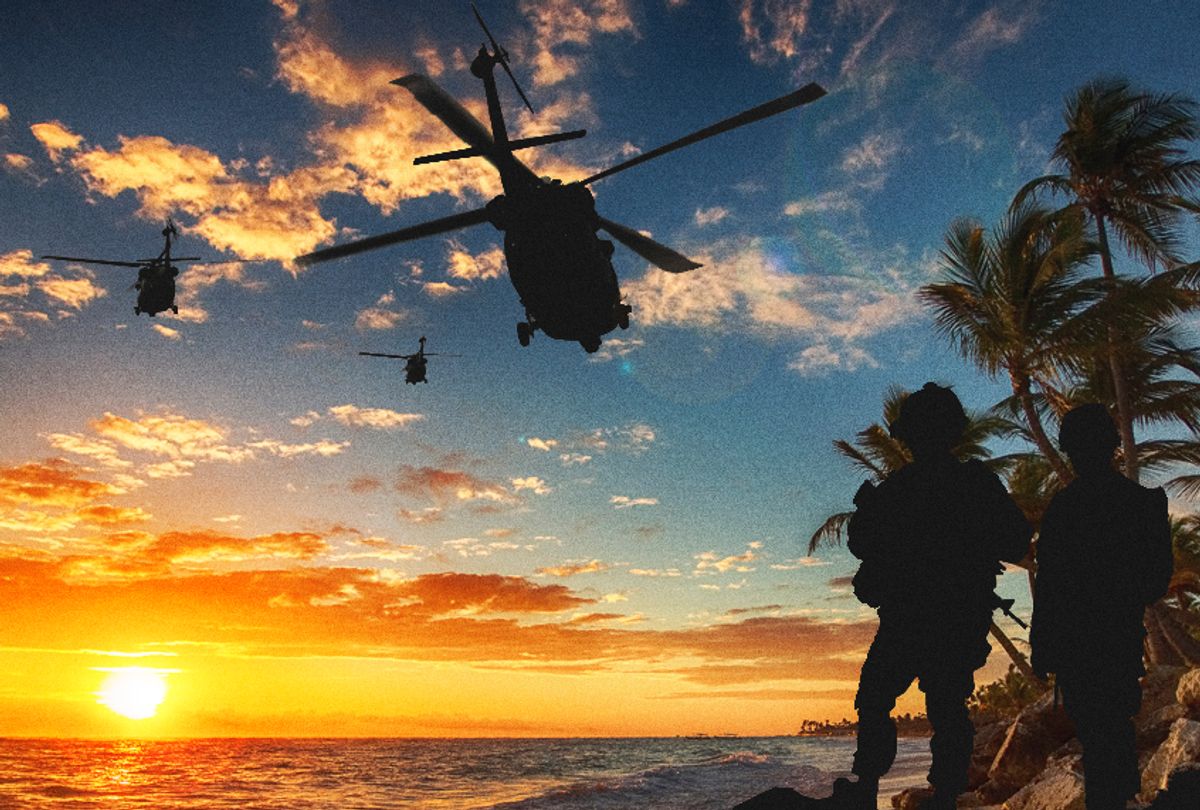 I want to suggest a new way to look at the wars this country has been engaged in for the last 17 years. Think back to the last time you visited a foreign country. What did you do? If you’re anything like me, you probably sampled the local cuisine and you went sightseeing, which is to say, you walked around and observed the fashionable scene on the streets of Paris, or maybe you bought mangoes from the ladies selling fruits in a local market on the island of St. Lucia, or you had a look at the ruins of a castle in the Dordogne, or the Forum in Rome.

In other words, you were a tourist, and you did what tourists do. There was an unspoken agreement between you and the people of the place you visited. You spent some money in the local economy, and you had a look at how the local culture and people, and they took your money and went about their lives and let you look at them, and you went home. Then other tourists came over and replaced you.

That’s pretty much what we’ve been doing for 17 years in Afghanistan, and 15 years in Iraq, and by now, a couple of years in Syria — not to mention the decades we’ve spent in and out of dozens of other hot spots around the globe like Niger and Djibouti and Somalia. It’s military tourism. We sent hundreds of thousands — even millions at this point — of heavily armed soldiers wearing helmets and bulletproof vests, carrying loads of ammunition and M-4 automatic rifles and machine guns, and they traveled around on foot or in armored personnel carriers and tanks, and we spent a whole lot of money, and they had a look around, and they went home. And then we sent more.

You know what we have to show for all of our years of military tourism? Nothing. The only thing we’ve accomplished is killing thousands of young men and women and wounding even more of them, not to mention killing god-only-knows how many hundreds of thousands of locals, whether they were “enemies” or “civilians.” We blew up thousands of acres of cities and towns and villages, or we left them to sectarian forces like ISIS to blow up after we left. What have we got to show for all of that?

We’re doing the same thing today we’ve done for seventeen years, only now we’re doing it Trump-style, as he jumps around from commitment to disdain, from let’s-get-the-troops-out to send-in-the-bombs. Giving a speech that was alleged to be about infrastructure at a rally in Ohio last month, Trump suddenly declared: “We’ll be coming out of Syria, like, very soon. Let the other people take care of it now!” The Wall Street Journal later reported that Trump had suspended more than $200 billion scheduled to be spent on Syrian recovery. Last week at a White House press conference with leaders of the Baltic states, Trump said, “I want to get out. I want to bring our troops back home. . . . It’s time.” White House aides were so alarmed, they arranged for Trump to meet with his national security team in the situation room, and they got him to agree not to immediately pull out the 2,000 troops currently serving in Syria. But Trump “pressed” the Secretary of Defense and Chairman of the Joint Chiefs of Staff and got them to agree we’d be in Syria “months, not years,” according to the Washington Post.

Four days later, more than 40 people were killed in a chemical attack by Syrian government aircraft on a rebel-held neighborhood near Damascus. By Sunday morning, Trump was tweeting.

Now what? Well, Trump will probably order another “surgical strike” on the Syrian air force, like he did last year when he sent 79 Tomahawk missiles into a largely deserted airfield and took out several dozen vintage MIGs the Syrians had parked there. Our troops who are said to be cleaning out the remnants of ISIS forces in Syria will continue to drive around in their armored Humvees and MRAPs, and we’ll spend a whole bunch more money, and then like Trump promised, we’ll go home.

That’s what military tourism is. It was like that when I was in Iraq way back in 2003 with the 101st Airborne Division in and around Mosul. I spent a week with an infantry company headquartered in an Iraqi social security office they had seized. One day, I went out on a patrol with about a dozen soldiers. They suited up in their armored vests, and I put on my armored vest, and they grabbed their M-16’s, and we walked around the streets of Mosul for about two hours. Half way through the patrol, I asked a sergeant what we were doing out there. “Don’t you know what this is, sir?” he asked. I answered, no. “It’s a presence patrol, sir,” he explained. I told him I’d never heard of a “presence patrol” before and asked him what it was. “Well, we call it a target patrol, sir,” the sergeant explained. He pointed at the people on the street around us, ordinary Iraqis, walking around doing whatever it was they were doing. “They’re the enemy, and we’re the target.”

We were walking down a street lined with little stores, crowded with ordinary citizens of Mosul out doing their afternoon shopping. About an hour later, we passed through the gates of our compound and I asked the sergeant what we had accomplished during our three hour patrol.

“Nothing, sir. Absolutely nothing,” he said as he took off his helmet and combat vest.

Every single Iraqi we had walked past knew the soldiers from the 101st would soon be going home. Hell, there was a TV in every tea shop and smokehouse we passed, and news about the 101st going home had been on CNN International. Sure enough, about a month later, the 101st loaded up, and did just that. They went home.

The following year, I was in Afghanistan visiting with a farmer and his family at the compound along the banks of the Kunar River, between Jalalabad and Asadabad near the border with Pakistan. The farmer was explaining to me the problems they had getting irrigation water to their crops, and why he was raising mostly poppies for opium, rather than wheat, the other cash crop in the valley. It seemed that getting his wheat crop was a problem because the local roads were so bad, grain trucks could no longer negotiate passage to their fields. But the warlords sent guys around to collect the opium and paid on the spot during the harvest, he said. Simple. He had to feed his family. What could he do?

I asked the farmer about the Taliban, whether he had any problems with them. He took me up the hill, closer to the mud brick wall of his compound, and pointed to three other compounds nearby. Like his, they had 20 foot high walls that surrounded multiple buildings inside where he and his extended family lived. The walls were necessary to protect livestock at night from marauding wolves in the nearby mountains. They were pockmarked by mortar and rifle fire, proving they were good for another kind of protection as well. The next compound down was a Taliban family, he said, and so was the one after that, but the third wasn’t. His matter-of-fact tone was like he was talking about Republicans and Democrats. Those two weren’t in his party, while the other one was.

Across a field a short distance away, an American military convoy rumbled past, maybe 20 Humvees moving along at 15 to 20 miles an hour, stirring up clouds of dust. The convoy was headed to an American base in Asadabad, about 20 miles away. The base had been there for three years. I asked him if any of the American Army guys had ever stopped, if he’d ever met or talked to any of them since they arrived back in 2001. Never, he said. The farmer didn’t know anyone who had talked to an American. In fact, I was the first American he had ever met. The American soldiers in the convoy, like the soldiers who served in the years before them, were doing one year tours in Afghanistan. Soon, they would be going home.

Now our soldiers are involved in fighting the remnants of ISIS around the town of Manbij, just east of Aleppo in Syria, where just over a week ago, one American soldier was killed and another wounded in the explosion of a roadside IED. How’s it going over in Syria these days, you ask? It’s very difficult to say. In fact, a recent New York Times story about the visit of two American generals to the front lines near Manbij struggled to explain the situation.

One of the Americans, Lt. General Paul Funk, overall commander of the coalition forces in Syria, was talking with Muhammed Abu Adel, commander of the Manbij Military Council. “The lasting defeat of ISIS is the most important mission for this group,” General Funk told Commander Adel, according to the Times.

But there was a problem. Adel was a Kurd, and American military support for the fighters around Manjib “has particularly alarmed Turkey,” reported the Times. The Turks are at war with the Kurds over the city of Afrin, about 80 miles west of Manbij, while threatening Manbij to with their ally militias, the Free Syrian Army in order to “make the Americans depart, so that the Syrian militias aligned with Turkish forces can take it from America’s Kurdish-led allies.”

“But in Manbij, both the Americans and the Kurds insist, the defending forces is the Manbij Military Council, an ally of the Syrian Democratic Forces, but independent and composed mostly of Arab fighters.”

Got that? Manbij Military Council? Syrian Democratic Forces? Free Syrian Army? Neither do I, and neither apparently did the American generals. The Times reported that in describing the American mission in Syria, General Funk said he preferred to “maintain focus on the enemy in front you and mow him down — that’s much easier than having to look in multiple directions.” But “multiple directions” are all that’s there to see over there in Syria, and Iraq and Afghanistan. Everywhere you look another faction, or militia, or religious sect, or persecuted minority.

I can tell you this much. Even if Trump orders another big missile strike against Bashar Assad’s air forces, or any other target for that matter, there is one thing all of them over there understand, no matter which “militia” or “military council” or “Free Syrian Army” they’re in. When the American military is finished spending money and looking around, they’ll go home. Because that’s what tourists do, military or otherwise. They visit foreign lands, and then they go home. In Iraq and Afghanistan and Syria, just like they did in Vietnam almost 50 years ago, they leave the locals one hell of a mess to clean up.