Conservative politicians often use racist dog-whistles to get votes, power, and money 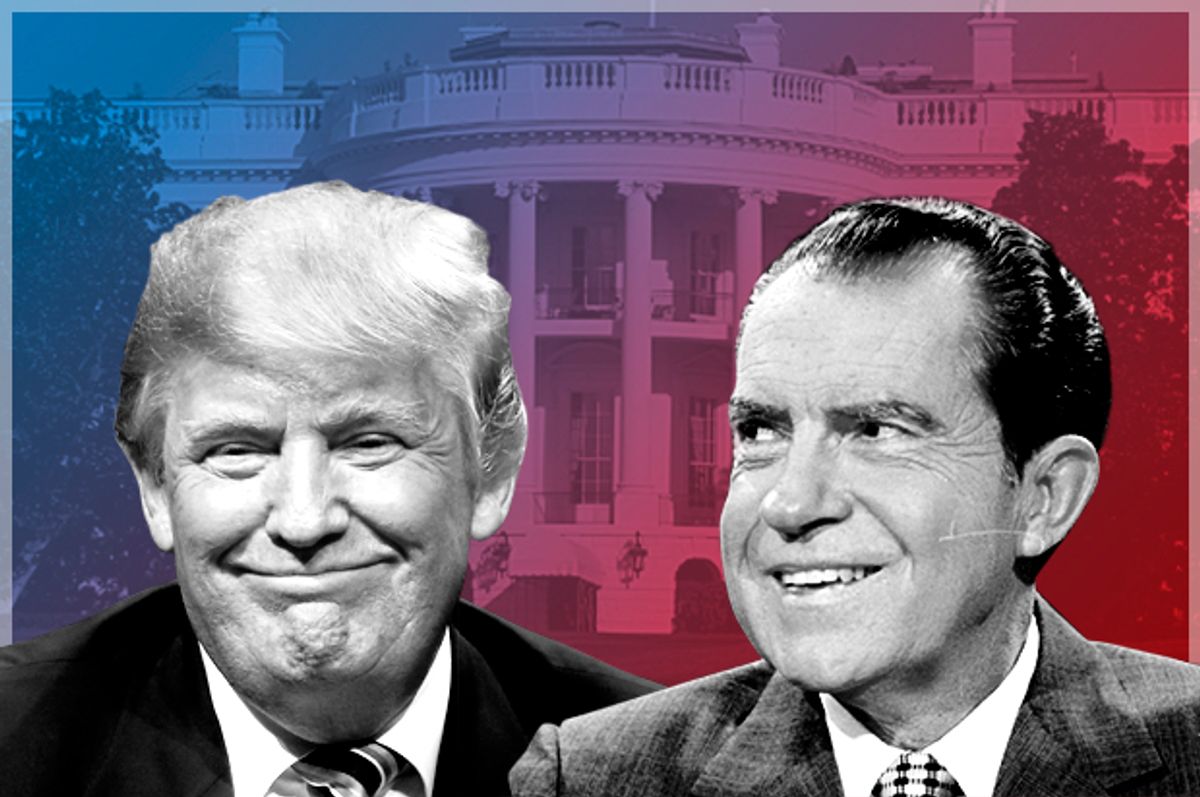 April 10th marked the 50th anniversary of the funeral of assassinated Civil Rights leader Dr. Martin Luther King Jr., capping a week of extensive press coverage about his life and death. However, all that coverage missed two key points that are even more important today than in 1968, when King was killed.

First is the matter of who paid for Dr. King’s assassination. None of the recent press coverage noted that an extensive congressional investigation of King’s murder “concluded that there was a likelihood of conspiracy” in King’s assassination, and that “financial gain was [James Earl] Ray’s primary motivation.” Newly released files — previously withheld by the FBI from Congress — now show who paid for King’s murder, and why.

The second major point overlooked by the press coverage is how Richard Nixon’s racially divisive “Southern Strategy” of 1968 led directly to and paved the way for Donald Trump’s successful racist campaign and governance strategy, with Paul Manafort being the surprising connection.

For two generations, conservative leaders — from politicians to billionaires to media figures — have used Nixon’s proven techniques of “Fear, Ignorance, Bigotry and Smear” (FIBS) to divide-and-conquer white working-class Americans and acquire political power. In the absence of our media calling them out for FIBS, Nixon’s strategy has repeatedly produced a Republican president and Congress, and held a right-wing Supreme Court.

But the most recent presidential race especially showcased the “Bigotry” part of Nixon’s successful formula, in particular his “Southern Strategy,” which allowed Nixon to use coded racist appeals designed to secure racist voters without turning off moderate voters.

For example, Nixon could avoid using the more direct racist appeals of a candidate like George Wallace by focusing instead on issues like his opposition to “forced busing” and his support for “preserving neighborhoods.”

Nixon could proclaim himself the “law and order” candidate in public, all while in private he was involved in shady real estate deals, getting huge sums (legal and illegal) from corporations and his wealthy supporters (including foreign dictators who funneled money to him personally and supported his campaigns), and even committing treason (sabotaging LBJ’s Vietnam peace deal in 1968) to win the election.

If those techniques sound familiar in the age of Trump, it’s no accident.

In 1980, Manafort was the Southern campaign coordinator for candidate Ronald Reagan. In that capacity, Manafort had Reagan speak at a county fair in Mississippi just a few miles from where three Civil Rights workers (Goodman, Chaney, and Schwerner) were murdered by racists in 1964.

Instead of using his speech to condemn those killings, Reagan instead spoke of his support for “states’ rights,” a term racist Southern politicians used in the 1960s to justify their discrimination and Jim Crow laws. (The term was so well known that the notorious white supremacist — and convicted church bomber — J. B. Stoner named his organization the National States’ Rights Party.)

Atwater summed up the Reagan/Bush version of Nixon’s Southern Strategy best, in 1981, when he pointed out to a group of Republican political operatives that, in the 1950s, white politicians could simply use the N-word, repeatedly.

“By 1968,” however, Atwater explained that instead of the N-word, white politicians instead used terms like “forced busing, states’ rights, and all that stuff,” including “economic things” like “cutting taxes… a byproduct of [which] is blacks get hurt worse than whites.”

These include Trump echoing Nixon to the word, saying he’d protect (white) Americans from threats to “our way of life”; exploiting exaggerated fears of crime; and even proclaiming himself the “law and order” candidate, just like Nixon.

The result? Southern states provided more than half of Trump’s electoral votes, and he won white voters by 21 percent, according to Facing South (whose work by Facing South’s Sue Sturgis we’ve cited extensively).

Donald Trump’s words and actions continue to this day to echo the racial politics of 1968, from his support of the Charlottesville racists to his public support by former Klan leader David Duke. Just like Nixon, Trump combines the more refined Southern Strategy of Nixon with the populist platitudes of George Wallace, to pander to bigotry and create fear of minorities in white working-class voters — all while enriching himself and his cronies.

As in 1968, creating such an atmosphere is dangerous, since it helped lead to the assassination of Martin Luther King. Just as conservative politicians easily use racism to generate votes, power, and money, King’s murder was also the result of racism for profit and political gain.

As we extensively documented in our book Legacy of Secrecy, Martin Luther King’s assassination resulted from a bounty on his life put out by four Georgia white supremacists, led by Joseph Milteer.

For years, Milteer and his associates had been collecting money weekly at one of Atlanta’s largest factories (whose peak employment was over 7,000), promising the white factory workers a plot to kill King, who was also based out of Atlanta.

By late 1967 and early 1968, Milteer’s contributors were getting anxious: Not only was King still alive, but no serious attempt to assassinate him had been reported in the press. (That was because Milteer and his associates had been using the money not to kill King, but to buy up large tracts of undeveloped mountain land in North Carolina.)

Eager to placate their contributors, but unable to find a hitman on their own, Milteer turned to the Mafia for help, according to Justice Department files that were previously withheld from congressional investigators.

Those Justice Department files say that “a well-placed protégé of [godfather] Carlos Marcello in New Orleans” revealed that that Mafia in New Orleans “agreed to ‘broker’ or arrange the assassination [of King] for an amount somewhat in excess of three hundred thousand dollars” on behalf of “an elite” group of “wealthy segregationists,” and specified Milteer’s tiny hometown of Quitman (not a typo), Georgia, as their base.

In addition, Milteer had ties with Marcello’s organization going back to 1963, when Milteer accurately predicted JFK’s murder on a Miami police informant tape less than two weeks before the crime, saying that JFK would be shot “with a high-powered rifle from a tall building” and that authorities “will pick up somebody within hours… just to throw the public off.” Milteer even mentioned an earlier plot to kill King on that same 1963 police undercover tape.

In late 1967 and early 1968, James Earl Ray was a very low-level drug runner involved with Marcello’s organization, according to government files and the congressional investigation. Other files say the King contract had two parts, one for the actual shooter and a smaller amount for a “spotter,” to track King’s movements, so the shooter could remain out-of-sight until the last possible moment. It’s not clear to this day if Ray was hired as the hitman or the spotter.

Tragically, while the House Select Committee on Assassinations investigated Milteer and Marcello for JFK’s murder (and concluded that “Marcello had the motive, means, and opportunity to assassinate President Kennedy”), the Committee — chaired by Rep. Louis Stokes — didn’t include Marcello or Milteer in their investigation of King’s murder.

That was likely because the FBI withheld key files about both men from the Committee. Though, as mentioned earlier, the Committee in 1979 “concluded that there was a likelihood of conspiracy” in King’s assassination, and “financial gain was Ray’s primary motivation.”

Not that you’d know about the Committee or its conspiracy conclusion from the mainstream press coverage of King’s assassination.

That’s largely because some key files about King’s murder — including those about Marcello and Milteer — are still being withheld from Congress, despite the 1992 JFK Act which required their release by October 2017.

When the FBI, CIA, Secret Service, and other agencies made last-minute appeals to keep certain files secret, Trump created a new deadline of April 26, 2018. However, many of the most important files about King’s and JFK’s murders won’t be released then, because they aren’t even on the master list — prepared by the National Archives — of documents and tapes that might be released.

Luckily, key files have sometimes slipped through the declassification process and historians, journalists, and researchers often share their efforts, so more information about King’s murder continues to come to light. For the past four years, Waldron has been working on an as-yet-unpublished new book about King’s assassination, which includes new information about Milteer and Marcello’s roles in the crime, from exclusive files about each.

King’s 1968 murder and Nixon’s Southern Strategy were created the same year, and both continue to have enormous impact on America today. There are also surprising connections between the players involved in each.

For example, Justice Department files show that Nixon received two separate million-dollar bribes from Carlos Marcello and his associates, one in September 1960 (when Nixon was vice president) and the other for President Nixon’s December 1971 release of Jimmy Hoffa from prison (with special conditions the Mafia wanted).

Nixon was also the first proponent of Donald Trump running for president, according to the man who introduced them, Roger Stone, and all three had ties to Roy Cohn, the notorious Mafia lawyer and fixer. Donald Trump even boasted, in 1985, that Roy Cohn was his most important mentor.

Cohn, who got his start with Joe McCarthy and became a mob favorite, wasn’t a typical lawyer; Cohn specialized in using threats, intimidation, and blackmail to get what he wanted (for himself and for his Mafia clients).

If cream rises to the top, one wonders what the reverse of that is, where men like Nixon, Marcello, Milteer, Cohn, Trump, etc., always seemed to find a new low.