Pain is the reward: Here's what pundits keep getting wrong about Trump and his supporters

Trump's voters are suffering. They still love him. Mainstream journalists lack any understanding of this pathology 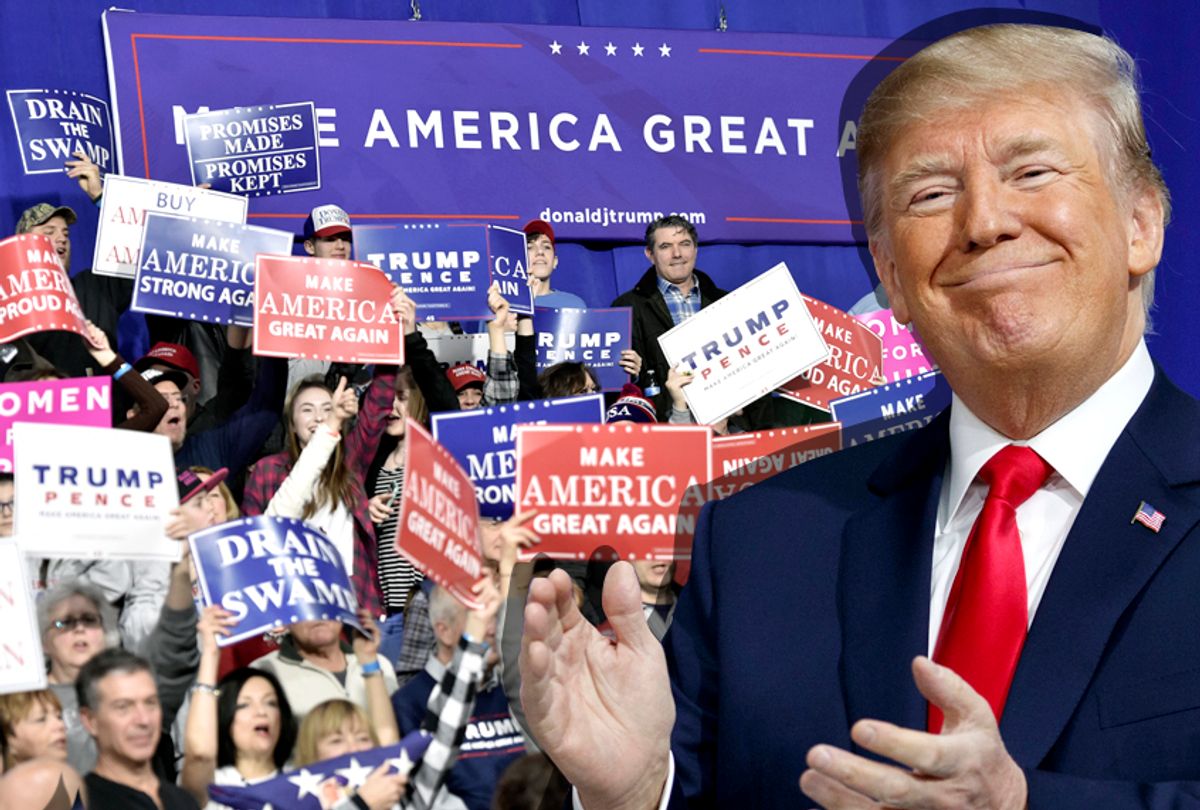 Donald Trump is not a real populist. His plans and those of his Republican allies--both already enacted and in the future--will further hollow out the social safety net, give even more money to the rich, damage the environment, reduce public education to ruins, remove corporate regulations and gut the Affordable Care Act. This will hurt most Americans, especially Trump's most enthusiastic supporters among the so-called "white working class." Yet these same voters continue to support Trump and the Republican Party.

This dynamic befuddles many journalists, reporters, pundits and other professional observers of politics. Why? Because they lack political vision and are extremely naive -- and overly hopeful -- about the true nature of today's conservative movement.

Moreover, the truth is simply too frightening for many people to accept: The Republican Party and movement conservatism are now fully sociopathic.

The criteria from the "Diagnostic and Statistical Manual of Mental Disorders" and the "International Statistical Classification of Diseases and Related Health Problems" are as follows:

Of course, Donald Trump personally exemplifies these traits in excess. He and the Republican Party (and especially right-wing libertarians such as the Koch brothers) have also perfected what I described several years ago as political sadism.

Here the Republican Party, its leaders, and media enablers use fear in conjunction with physical, emotional and financial pain to manipulate Republican voters and many independents into supporting policies that cause them harm. Instead of attributing the cause of this distress correctly, Trump's voters and other members of the American right-wing want to retaliate against and thus hurt those individuals and groups they view as the Other. This is the primary psychological wage that today's Republican Party and conservative movement pays its supporters.

In his new book "The Road to Unfreedom," Timothy Snyder, the Yale historian and bestselling author, describes this feedback loop as sadopopulism:

Trump was called a "populist." A populist, however, is someone who proposes policies to increase opportunities for the masses, as opposed to the financial elites. Trump was something else: a sado-populist, whose policies were designed to hurt the most vulnerable part of his electorate.

Encouraged by presidential racism, such people could understand their own pain as a sign of still greater pain inflicted upon others. ... [S]uch a voter is changing the currency of politics from achievement to suffering, from pain to gain, helping a leader of their choice establish a regime of sadopopulism. Such a voter can believe that he or she has chosen who administers their pain, and can fantasize that this leader will hurt enemies still more. ... If people who support the government expect their reward to be pain, then a democracy based upon policy competition between parties is endangered.

The pundits, journalists and other observers who choose not to speak truth to power have internalized a folk theory of American politics and society. In this mythology, American voters are thought to be rational actors, fully capable of relating their personal lives to broader sociopolitical questions, and ultimately placing material self-interest above other concerns. And they are believed to be fundamentally decent people who will usually make the right choice, in the aggregate, when given the opportunity.

However, decades of research in political science, social psychology and other fields complicates those assumptions. For example, the recent book "Democracy for Realists" by political scientists Christopher Achen and Larry Bartels highlights the power of symbolic politics and group identity in the political behavior of American voters.

Bartels has also shown in his new working paper "Partisanship in the Trump Era" that the election of Donald Trump has not dramatically remade the Republican Party, nor has it caused a mass exodus by its more "sensible" voters. Trump is in fact the leader of the Republican Party; his values, policies and ideas are shared by a large majority of Republican voters.

Because Republicans and the broader right-wing have spent at least five decades nurturing both dog whistle white identity politics and overt racism, as well as other culture war issues, their voters are a movement beholden to a type of political religion. The Democrats have no such advantage: Their base is a coalition of different groups who are more pragmatic and much less ideologically zealous.

It is true that Trump and the Republicans leave the vast majority of their voters' bellies empty. But in a devil's bargain, they fill their voters' hearts and minds with rage, hate and resentment. What substitute can liberals, progressives, and Democrats offer for such a seductive and poisonous cocktail? If the Democratic Party is unable to find an answer, Donald Trump will be a two-term president.