“Now we are going to catch all you little Fockers, you got that?” De Niro's Mueller said. 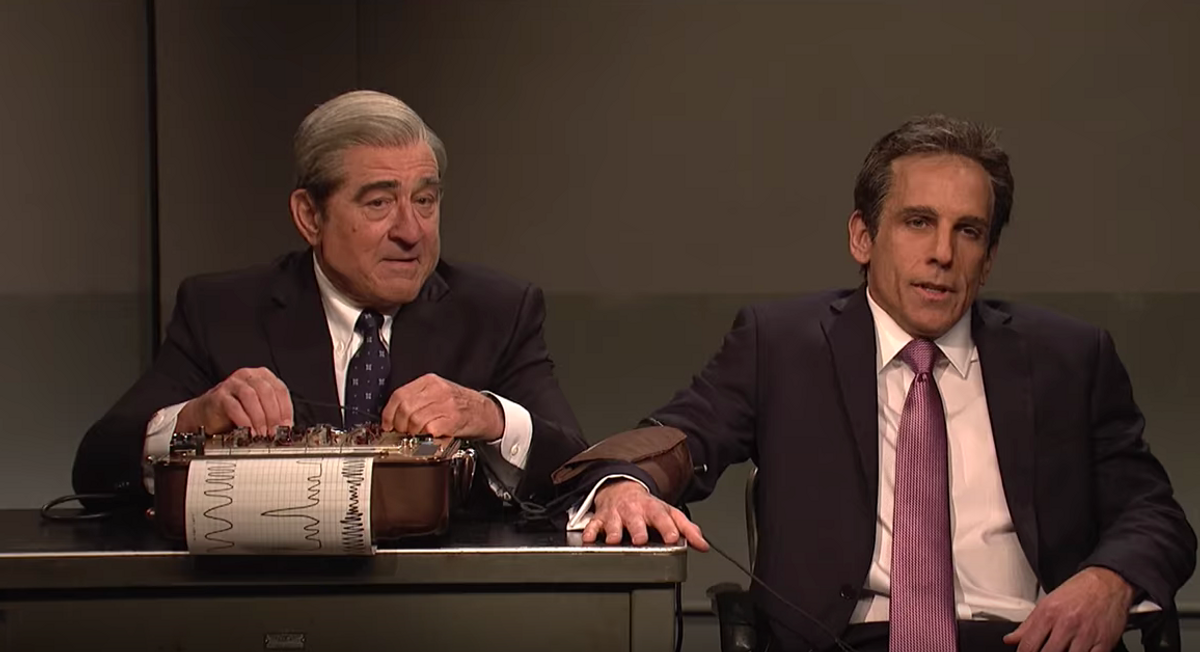 Forget about a fourth “Meet The Parents” movie, a parody in which Robert De Niro and Ben Stiller are poking fun at the chaos going on at the White House will do just fine. The former co stars reunited on this week’s Saturday Night Live, but instead of De Niro playing Jack Byrnes, and Stiller playing Greg Focker, De Niro took on the character of Robert Mueller, and Stiller was Donald Trump’s personal lawyer Michael Cohen.

The scene played out like this. Kate McKinnon who hilariously played Attorney General Jeff Sessions, and Beck Bennett who played Vice President Mike Pence, were chatting before a planned meeting with Stiller’s Cohen character, who—like in real life—had just had his office raided this week.

“I feel like I say this every week, but this week was bad,” McKinnon’s Sessions said.

“In a couple of months the president will be back to normal,” Bennett’s Pence replied.

“How’s that?” fake Sessions inquired.“Because it’ll be me.”

Then Stiller’s Cohen entered the room.

“That’s right, it’s Michael Cohen, attorney at law. And also sometimes not at law,” he announced. “Can you believe what they’re doing to poor Mr. Trump? It’s a disgrace! This whole raid was a complete violation of attorney-criminal privilege.”

“Look we got a real problem here, Jeff,”  Stiller’s Cohen said. “Do you know how much evidence I have in my office? I’m Donald Trump’s lawyer. I’ve got a whole hard drive that’s just labeled, ‘Yikes!’”

Fake Cohen went to another room where De Niro’s Mueller waited for him—with a polygraph test. The scene quickly turned into one mimicking the infamous lie detector test from “Meet The Parents.”

“Here put these on,” De Niro’s Mueller said. “Have you ever used a lie detector before? Just relax Mr. Cohen if you’re innocent you have nothing to worry about.”

During the fake polygraph test, Stiller’s Cohen said “You can milk anything with nipples.”

“Really? I have nipples, can you milk me Mr. Cohen?” De Niro's Mueller said. “Now we are going to catch all you little Fockers, you got that?”