Chevron has avoided justice for environmental crimes in Ecuador and the U.S. 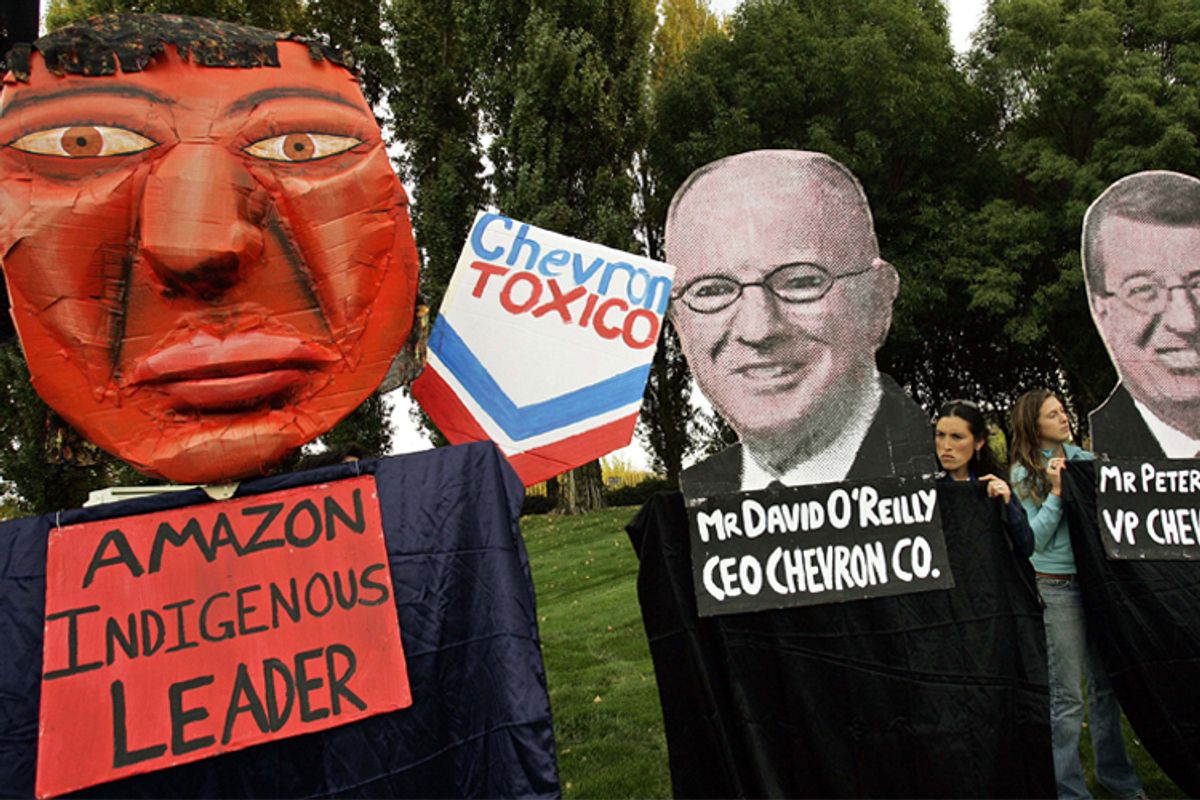 This Tuesday, April 17, a court in Toronto will hear the latest round of arguments in the epic legal battle between Chevron and the Ecuadorian villages that the oil company systematically contaminated for decades.

This latest chapter opens with the country’s second-biggest oil company performing the legal equivalent of the comedy trope known as “Behind a Stick,” when one or more characters attempt to hide using a much-too-thin object. In the case pending before the Ontario Appeals Court, the fat man is Chevron, and the stick is its subsidiary, Chevron Canada, which Chevron believes it can stand behind without being seen — or at least without being held liable for its crimes.

The company is claiming that, in terms of liability, neither it, nor its estimated $15 to $25 billion in Canadian assets, exists. Only Chevron Canadaexists, and any appearance of a relationship between the California-based Chevron and Chevron Canada, its wholly owned subsidiary in the Great White North, is purely coincidental.

One court in Canada has agreed with Chevron that it can’t be seen standing behind Chevron Canada. On Tuesday, the Ecuadorians will begin arguing their appeal.

The story of how Chevron came to be hiding behind a legal coat rack in a Toronto courtroom famously begins a half-century ago in northern Ecuador, where the company devastated an area of rainforest the size of Rhode Island, leaving behind an estimated 1,000 toxic waste pits and a health emergency known as the “Amazon Chernobyl.”

Less known are the many turns the story has taken since the Ecuadorian Supreme Court in 2013 upheld a $9.5 billion damages award. The biggest class action judgment in history seemed to herald the arrival of a new paradigm for communities around the world seeking redress for pollution caused by strip-dump-and-split oil and mining companies.

But Chevron and the industry understood the power of this precedent, and announced that it could not stand. As a Chevron lobbyist told Newsweek, “We can’t let little countries screw around with big companies like this.”

After losing in Ecuador, where Chevron had insisted the trial be held, it counter-sued in New York, arguing that the Ecuadorian award was based on fraud. The company’s central witness was a corrupt Ecuadorian judge named Alberto Guerra, whom the company paid $2 million dollars and coached for nearly two months prior to his taking the stand. Guerra testified that the Ecuadorians’ legal team had bribed Ecuadorian courts and ghostwrote the final decision. Guerra has since admitted he perjured himself, while a forensic report has disproved the ghostwriting allegation.

Based on Guerra’s tainted testimony, a U.S. district court judge named Lewis Kaplan ruled that the Ecuadorians could not enforce their award on U.S. soil. (They couldn’t collect it in Ecuador, either, as Chevron dumped its remaining assets in the country during the original trial.)

The Ecuadorians then looked north, where Chevron has billions invested in tar sands, refineries, and other infrastructure. When they filed to collect damages from Chevron Canada, the parent company countered with a string of actions to block the suit from proceeding. In the last few years, the Ecuadorians have been on a roll, winning three consecutive unanimous appellate decisions. These have been won against one of the best-funded legal efforts in history: Chevron has spent an estimated $2 billion to hire 60 law firms and 2,000 lawyers to target the villagers and their legal representatives since the case began.

Which brings us to Chevron’s current “behind a stick” routine. Last year, Ontario’s Superior Court of Justice accepted Chevron’s technical argument that they and Chevron Canada are distinct legal personages with distinct assets, and that one cannot be held responsible for the other, even though they are part of the same ownership hierarchy.

“To understand the absurdity of the argument, imagine a couple gets divorced,” says John Phillips, a Canadian adviser to the Ecuadorian legal team. “If the husband set up holding companies for his assets, which he owns to the seventh level, do you think any court would hesitate for one second to distribute those assets?”

The implications of next week’s decision extend beyond Ecuador, where villagers are still waiting for the funds needed to remediate their forests and rivers. On Tuesday, the aboriginal rights specialist Peter Grant will argue that letting Chevron skate on a legal technicality will disempower other indigenous communities around the world, including those of Western Canada, which the industry has crisscrossed with pollution-spewing wells and leaking pipelines. In recognition of their shared interests, Canada’s Assembly of First Nations last year signed an historic political accord with the indigenous people of northern Ecuador.

“If the Superior Court decision stands, other corporations will think they can walk away from potentially catastrophic environmental liabilities by setting up subsidiaries to insulate themselves,” says Phillips, the Canadian lawyer.

The industry understands the magnitude of these stakes very well, of course. Which is why Chevron has spent billions rather than concede a penny to villagers and farmers living in a toxic zone without access to clean water.

The fate of Chevron’s scorched-earth retaliation strategy will be determined by events next week in Toronto.