The hit TV series "Breaking Bad" came to a close in September 2013, but Sean Hannity may just make it great again 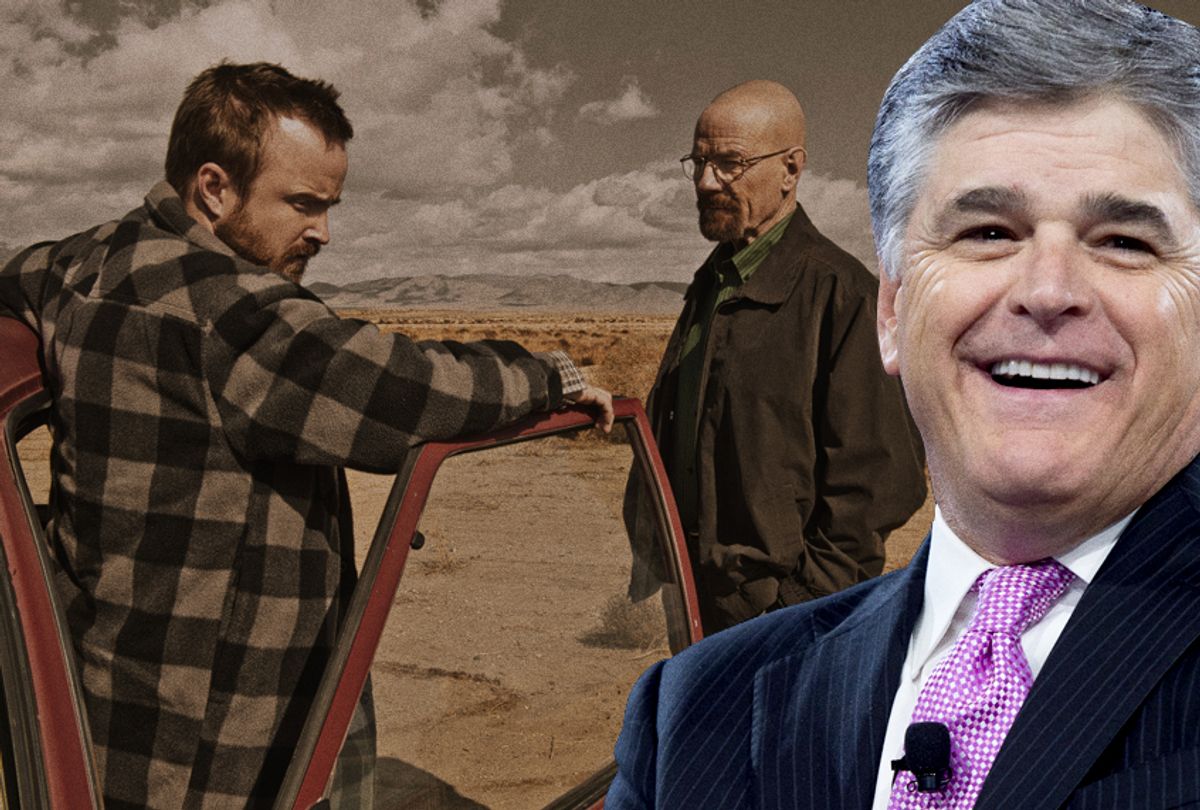 That's because several Twitter users suggested yesterday that Hannity has been getting legal advice from old episodes of the Emmy Award-winning show. The speculation first began after Michael Cohen, the personal attorney to President Donald Trump who is currently at the center of a federal investigation, failed to protect the identity of a “mystery” client.

That client turned out to be none other than Hannity. After the news broke, the Fox News host claimed he had never given a retainer to Cohen.

“Never paid any fees. I may have handed him $10 once," Hannity said on his own radio show. "I requested attorney-client privilege with him, and assumed our conversations would be confidential. But they have never involved any matter with him and any third party.”

Hannity's line about how he “may have” given Cohen $10 to gain “attorney-client privilege” was what provoked the internet's suspicions. While money is generally not required to secure attorney-client privilege, the notion dominates in popular culture and has been used as a plot device on many TV series, including “Breaking Bad.”

In the second season episode titled “Better Call Saul,” attorney Saul Goodman (Bob Odenkirk) ― who would later move on to star in his own spin-off of the same name ― urged Walt (Bryan Cranston) and Jesse (Aaron Paul) to “put a dollar in my pocket” to guarantee attorney-client privilege. This lead Twitter users to wonder if this plot line was the basis for Hannity’s legal leanings.

"Hannity handing Cohen $10 and asking for attorney-client privilege is LITERALLY an episode of 'Breaking Bad,'" one user wrote.

Early in the day yesterday, Hannity confirmed to the Wall Street Journal that he had received legal advice from Cohen. “We have been friends a long time. I have sought legal advice from Michael,” Hannity said.

The Fox News host later clarified those remarks on his personal Twitter account and denied having received legal advice from Cohen.

"Michael Cohen has never represented me in any matter. I never retained him, received an invoice or paid legal fees," Hannity tweeted. "I have occasionally had brief discussions with him about legal questions about which I wanted his input and perspective."

"I assumed those conversations were confidential, but to be absolutely clear they never involved any matter between me and a third-party," he continued.

Gabriel Sherman, a special correspondent at Vanity Fair, reports that Sean Hannity hired Cohen to defend him last year around the time Media Matters for America called for advertiser boycotts against him.

"Sean Hannity hired Michael Cohen to help defend him against left-wing groups that were calling for boycotts in the wake of Bill O'Reilly's ouster from Fox News under pressure from advertisers and left-wing groups," Sherman said on MSNBC.

Hannity has been an ardent backer of Trump, both on-air and off, and has repeatedly attacked special counsel Robert Mueller’s investigation into Russian meddling in the 2016 election. The Fox News personality has also frequently defended Cohen in the days since the FBI raided Cohen's home and office — although he failed to mention that Cohen had represented him.