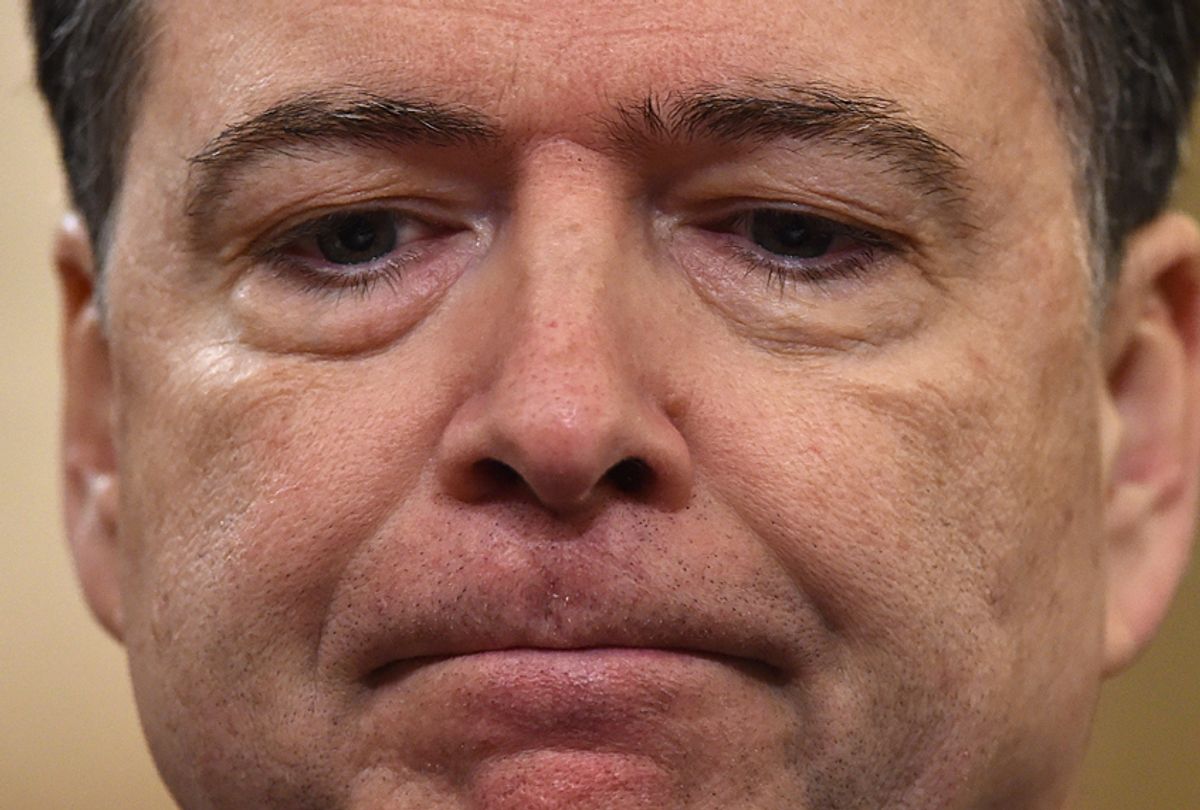 After failing to mount any real defense against Michael Wolff’s book “Fire and Fury,” Donald Trump and his allies are trying to push back hard against the release of James Comey’s memoir “A Higher Loyalty.” They really ought not to bother, since the fired FBI director’s book offers very little that has not been heard before.

It’s notable in some sense that one of America’s former top law enforcement officials is willing to compare the sitting president to a mafia boss, something Comey also did during his interview broadcast Sunday night on ABC. Still, MSNBC and other channels frequently feature the commentary of Comey’s former intelligence colleague James Clapper denouncing Trump as a “Russian asset” and various other insults. Given how many left-leaning television comedians there are willing to make such jibes on a nightly basis, after a certain point the imprecations start to blend together. They certainly have no effect on the president’s fans.

In this regard, Comey is far from an original wit. He described Trump as "orange," and remarked on the size of the president's hands, the length of his ties and his obvious willingness to lie about anything. Only the latter accusation actually matters, of course, but it is so evident that hearing yet another person say it is meaningless. Trump is a lout with no respect for the rule of law, which is why the man he unjustly fired should be above such pettiness.

Having scooped himself in testimony before the Senate Intelligence Committee last June, Comey seems to have padded his word count with endless anecdotes from his childhood and frequent odes to his own personal uprightness, disguised as lectures on “leadership.” As The Washington Post’s Carlos Lozada observed, the former FBI director only seems willing to own up to the most trivial of transgressions, such as lying a few times about having played college basketball. At the same time, Comey makes sure to tell readers of an incident in which he informed a colleague that he was re-gifting a tie (“we considered ourselves people of integrity”) and that he never cut in line at the FBI lunch counter while serving as the director.

On matters of much more consequence, Comey seems to have no regrets. In his book and during his ABC interview, the fired FBI head defends his decision not to publicly disclose the existence of the bureau’s investigation into possible connections between the Trump 2016 campaign and Russia. He also spends considerable time and effort trying to justify his handling of the FBI investigation into Hillary Clinton’s unauthorized use of a private email server during her time as secretary of state.

Despite the conventional wisdom that Comey may have affected the election results -- an opinion expressed by Clinton herself -- a rigorous analysis of polling data shows that the FBI director's unusual statements about the investigation (first its conclusion, then its resumption and finally its conclusion again) did not necessarily impact the 2016 election. Comey seems to believe he did, but that none of it was his fault. Asked by ABC anchor George Stephanopoulos if he supports the idea of impeaching the “morally unfit” Trump, the former FBI chief flatly opposed the idea.

“I hope not because I think impeaching and removing Donald Trump from office would let the American people off the hook and have something happen indirectly that I believe they’re duty bound to do directly,” Comey said. “People in this country need to stand up and go to the voting booth and vote their values.”

As a practical matter, this is probably true. Nonetheless, Comey seems remarkably unperturbed about his past actions, which is strange considering how dangerous he claims to believe that Trump is to the republic.

While Comey’s book and his publicity tour thus far have offered relatively little value on their own terms, they are likely to produce news in another way. Trump is notoriously thin-skinned, and seeing Comey’s name and image splashed all over the cable news channels he so obsessively watches obviously angers him. From a public relations standpoint, the best thing Trump could do would be to ignore “A Higher Loyalty,” but to do that would be completely out of character. And sure enough, mere hours before ABC’s heavily edited interview with Comey aired, the president unwittingly gave him a boost on Twitter:

He even came back later in the day to plug Comey's TV appearance yet again:

On its own, the James Comey Show isn’t likely to amount to much. But consider how frequently Trump’s ravings at people he hates, either on Twitter or in impromptu news interviews, end up with him saying things he should not. In that light, it’s entirely possible the fired FBI director’s self-indulgent memoir could actually do some good.