Paul Ryan's parting gift to the rich: Yet another Republican tax cut? 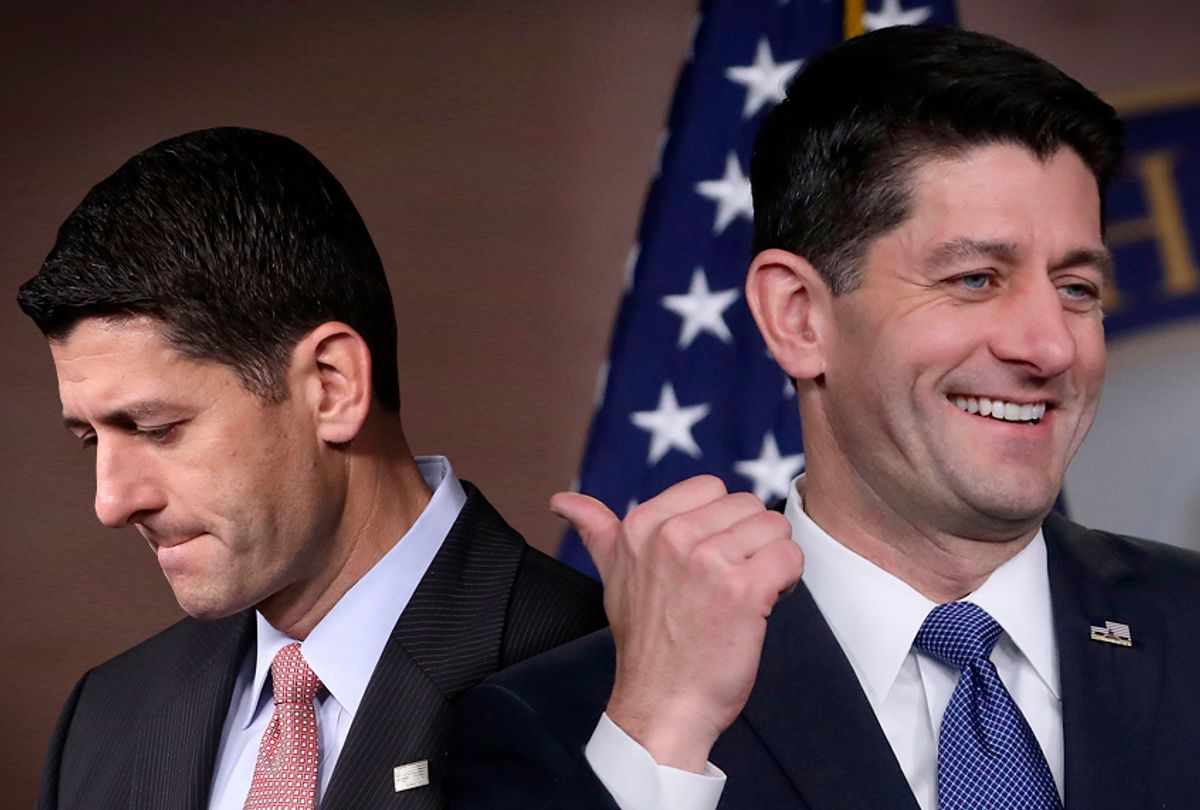 It is yet another Tax Day in America. Eager to deliver another so-called win ahead of the midterm elections, Republicans are using the occasion to roll out even more tax cuts for the rich.

With fewer than half of Americans complaining that their personal tax obligation is too high — the smallest percentage in more than five years — and the recently passed GOP tax bill still significantly underwater, Republican lawmakers somehow think the best way to fend off building Democratic momentum is to reward wealthy GOP donors all over again.

Standing next to anti-tax crusader Grover Norquist (he of "drown government in the bathtub" fame), Sen. Ted Cruz, R-Texas, recently announced his plan to ease the tax burden paid by America’s wealthiest citizens. Mind you, those people have already been helped out tremendously by the GOP’s tax law, which made a 40 percent reduction in the top corporate tax rate permanent while setting a 2025 expiration date on cuts to individual taxes and rates.

Just last week, the nonpartisan Congressional Budget Office (CBO) found that the Republican tax cuts will fuel historic deficits. In March, the federal deficit was $208 billion, an increase of $32 billion from last year. The Treasury Department had already said that the deficit increased 18.4 percent in February compared to 2017. GOP tax cuts are estimated to add $1 trillion or more to federal budget deficits over a decade, even after economic growth is taken into account.

Nevertheless, Republicans have stayed calm and carried on with tax cuts.

On Monday, President Donald Trump traveled to Florida where he praised the GOP tax law for driving one of the "greatest booms" to the U.S. economy. But job growth has actually slowed since Trump took office. Introducing his bill to discount capital gains taxes, in effect, to account for inflation, Ted Cruz claimed, “We’re seeing the economic benefits of this tax cut, even just a few months into it. Over four million Americans have already gotten pay raises or bonuses directly as a result of the tax cut.” But most Americans have not noticed a larger paycheck since the law was enacted, according to a CNBC poll released in March. A recent analysis from the pro-reform group Americans for Tax Fairness found that 433 corporations out of the Fortune 500 have not offered any bonuses or wage increases to employees since the passage of corporate tax cuts. Instead, the analysis found, companies spent 37 times as much on stock buybacks.

Even as GOP groups pour money into efforts to sell their tax cuts for the donor class to the voting base, the law remains massively unpopular. (A group linked to the Koch brothers has spent about $20 million in ads focusing on the tax law since August and plans to run $400 million worth of ads in vulnerable GOP districts leading up to this year’s midterms.) Just 27 percent of Americans think the GOP tax cuts were a good idea, according to a new NBC News/Wall Street Journal poll released on Monday. In other words, the Republican tax plan has actually gotten less popular with voters over time.

But popularity was never really the goal, was it? The point was to starve the federal government of tax revenue in order to justify slashing the social safety net — something Republicans in Congress and the White House began to address in earnest last week.

Just one day after the CBO released its forecast of a ballooning federal deficit, Trump ordered federal agencies to conduct a broad review of so-called welfare programs to identify new work requirements to place on recipients. Right on time, House Republicans then introduced the 2018 Farm bill, featuring a stringent new proposal to mandate that adults between the ages of 18 and 59 work part-time jobs or be enrolled in at least 20 hours per week of job training in order to receive food stamps under the SNAP program.

Aside from the fact that SNAP spending is already down — from $79.8 billion in 2013 to about $70 billion in 2017 — the CBO estimates that as many as one million people could be kicked off the program as a result of Republicans’ proposed new rule. Most working-age SNAP recipients who don't receive disability benefits already work, especially those able-bodied, childless adults who House Republicans claim abuse the system.

Meanwhile, the Republican-controlled Congress followed up their corporate tax cuts with a massive omnibus budget that boosts spending past previous budget caps by $300 billion over two years.

On Tax Day 2018, just one week after House Speaker Paul Ryan announced his retirement at the age of 48 — after spending his entire adult life on the government “dole” — Republicans have once again laid bare their true intentions. Passing a deficit-busting tax bill was intended to explode the national debt and thereby endanger future funding for the tattered remnants of the social safety net that survived welfare reform in the 1990s — including Medicare, Medicaid and Social Security.

"We’re looking very strongly at welfare reform, and that’ll all take place right after taxes, very soon, very shortly after taxes," President Trump promised when he was still lobbying members of his own party to pass the tax cuts last year. "People are taking advantage of the system," he insisted.

Despite the unpopularity of GOP tax cuts, Republicans remain unwilling to let go of the Reaganite supply-side nonsense so memorably dubbed "voodoo economics" by former president George H.W. Bush. At least officially, they cling to the doctrine that slashing taxes will somehow increase revenues, with literally no evidence that this has ever worked. The only play they have left is to scream that Democrats who are trying to save the social safety net are really just implementing socialism.

“That’ll be the defining question in November,” House Ways and Means chair Kevin Brady, one of the architects of the tax overhaul, told Bloomberg, discussing the political effect of the tax cuts. “Do you want to go back to the bad old days where Washington took more of what you earned?”