The administration’s focus on frivolous space travel is amusing. It also distracts attention from real problems 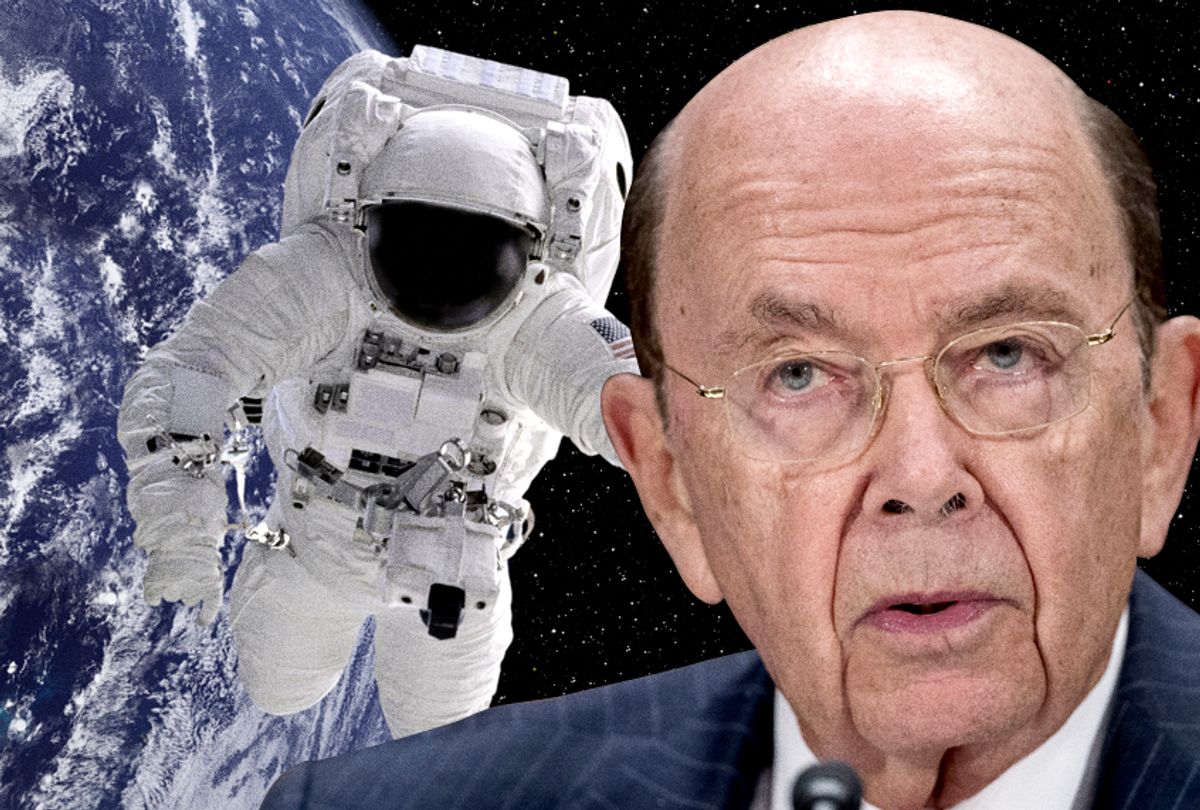 This week’s headlines about climate change should be alarming enough to nudge even the most environmentally-unconscious among us to contemplate the fate of our planet. Climate change is reportedly causing an uptick in Lyme disease. As heat waves increase due to climate change, so do heat-related illnesses and deaths. Oh, and a prominent lawyer, David Buckel, set himself on fire over the weekend and sent an email to The New York Times that read: “Most humans on the planet now breathe air made unhealthy by fossil fuels, and many die early deaths as a result — my early death by fossil fuel reflects what we are doing to ourselves.”

I'm sure you're surprised to learn that none of this news has apparently penetrated the Trump administration. Instead, Commerce Secretary Wilbur Ross -- a banking billionaire who is likely far wealthier than President Trump -- appeared on CNBC on Tuesday to discuss the future of business . . . in space. He did not mention the internet-beloved “Space Force” idea that Trump semi-coherently name-dropped during a speech at the Marine Corps Air Station Miramar in March. But believe it or not, there was talk about building a gas station on the moon. The interview was a continuation of the announcement that the Department of Commerce will oversee a new space traffic management policy, which Vice President Mike Pence announced on Monday.

Ross began by explaining how profitable space tourism could be in the future.

“People are literally paying $250,000 for a ride into suborbital space,” he told CNBC. “And Richard Branson has already signed up, I think, 60 customers for that activity with a lot more to come because these are people who have prepaid for a rocket that doesn’t quite exist yet.”

Ross continued to casually imply that “lunar landings” will be part of our commercial future soon as well, although he did not specify a time frame for these plans.

“You’ll have the moon -- [it] will essentially become a sort of gas station for some flights en route to Mars,” he said. “For a lot of technical reasons, it will use a lot less fuel to make a stop at the moon and then on to Mars, and the moon is a perfect place for a gas station because it has huge amounts of ice — those dark spots in the moon are really solid ice.”

Ice, Ross informed us, is made of hydrogen and oxygen, which are needed for rocket fuel. That part is true! Or at least not blatantly false.

“So they will relaunch the spacecraft from the moon to Mars,” he added. “It will save a huge amount of money, greatly increase the payload, and in turn will lead to putting colonies on Mars. It will lead to space mining.”

What was that now? "Space mining"? A gas station on the moon? Is this all folded into the Space Force program? Ross’ remarks signal yet another step in the direction of delusion, not to mention an attitude of negligence when it comes to our responsibility for our home planet. Yes, the current administration made their stance clear on climate change the day Trump pulled out of the Paris agreement, but the continuous accumulation of the administration’s environmentally unfriendly policies — most recently potential rollbacks on the national standard for greenhouse-gas emissions — and money spent elsewhere, such as on fanciful programs of space tourism, only worsen the damage that will likely be done by doing nothing.

In the abstract, there is nothing wrong with space travel. If the human race does not extinguish itself, it will surely get there eventually. But one can reasonably argue that there are bigger problems on Earth that the government should be focused on solving. Ross’ new responsibility to forge new commercial pathways for the space industry won’t contribute positively to humanity in any near-term sense. All it will do is stroke a few egos and enable more ultra-wealthy individuals to fulfill a childhood dream of getting launched beyond the stratosphere.

It’s also both striking and strange that this privatized space program will be overseen by the Department of Commerce, whose sole purpose is to promote economic growth. That alone signals the administration’s desperation to monetize and capitalize absolutely anything. It feels almost like a desperate, irrational attempt to climb out of the trillions of dollars of debt the country faces.

Still more baffling and depressing, however, is that this administration doesn't even believe in climate change, let alone want to do anything about it. Wilbur Ross certainly doesn’t appear to be a believer — based on his response to Trump’s move to withdraw from the Paris agreement.

“That deal imposes little responsibility on the world’s largest emitters, while costing the U.S. economy three trillion dollars in reduced output, six million industrial jobs, and three million manufacturing jobs,” said the commerce secretary, in a prepared statement. “That amount of economic carnage is unjustified, and so we welcome this long overdue action in defense of the American people.”

Maybe Wilbur Ross and people like him hope to flee Earth in private spacecraft, if and when the buildup of greenhouse gases finally renders our planet unlivable.