New York's progressive challenger has a national platform, and makes the best use of it 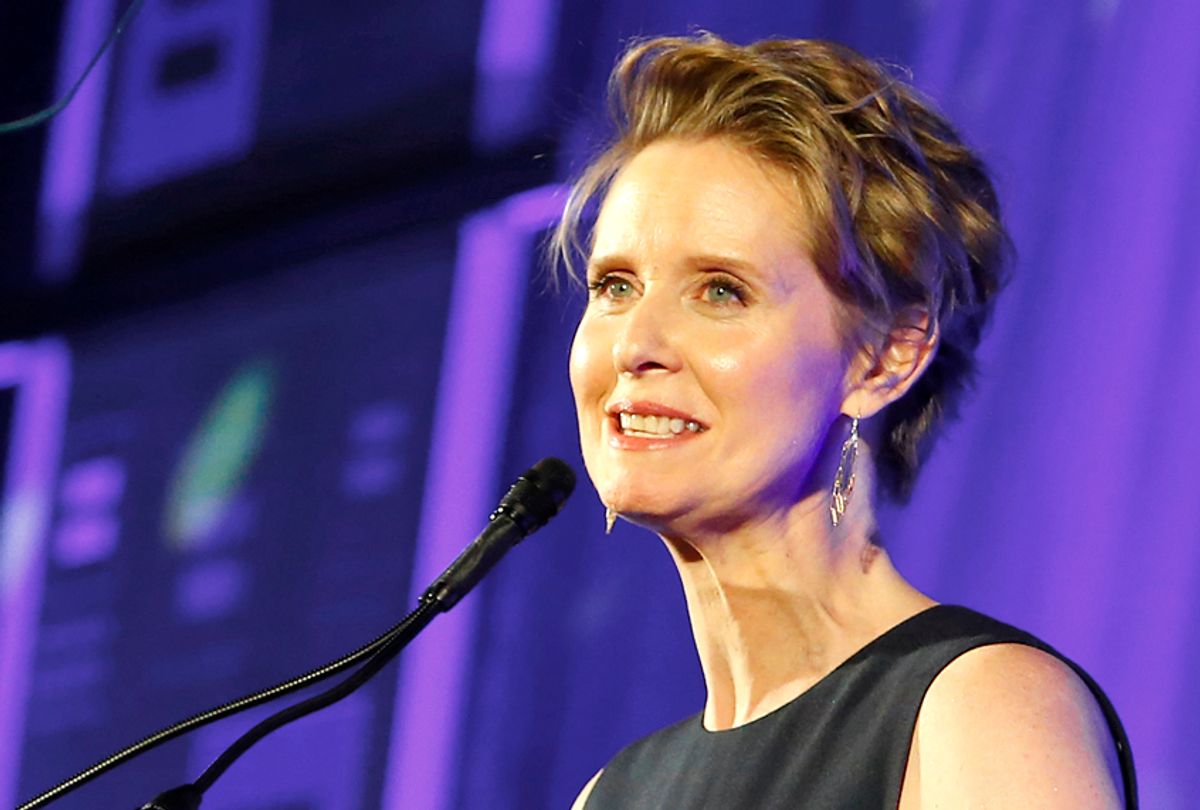 Cynthia Nixon, the actress and Democratic insurgent running against New York Governor Andrew Cuomo, made one of her first national television appearances Wednesday night on "The Late Show with Stephen Colbert" and quickly delivered the first of what turned out to be many barbs against the state's Democratic Party standard-bearer.

"I would rather be the good Nixon than the bad Cuomo," she said, after admitting that her grandfather's name was Adolf — meaning her family had to deal with two generations of poorly chosen names.

"Put some ointment on that burn," a stunned Colbert replied.

Nixon said she was running because "we can do so much better. Because we're a blue state — we're a proudly Democratic state — but we've got a governor in there who governs like a Republican." Nixon pointed to things like campaign finance reform, criminal justice reform, voting reform, renewal energy and school reform  — "all of the progressive things that California is doing, and Oregon and Washington" — are things that haven't been happening under Cuomo's leadership.

One of Nixon's sticking points was the state's Independent Democratic Caucus, a group of Democrats who often caucused with Republicans, giving the minority party legislative control.

Here's some background on how the splinter group has been a thorn in Democrats' sides, via The Washington Post:

Founded seven years ago, after Republicans won control of the New York state Senate, it began as a coalition of four Democrats who, in Klein’s words, “could no longer in good conscience support the present Democratic leadership.” They lost nothing by breaking with their minority-status party; they gained clout by working with Republicans. In 2012, Democrats won a majority of state Senate seats, but the IDC stayed in formation, and the odd coalition continued for years, with even more Democrats climbing on board.

Liberals have said Cuomo has allowed the coalition to survive  — something that appeared to be true when, earlier this month, he led a ceremony to disband the IDC after pressure from his primary challengers — including Nixon.

But Nixon has forced Cuomo to veer left on a number of issues: criminal justice reform and legalizing marijuana, just to name two, and she earned the endorsement of the progressive Working Families Party, despite claims that Cuomo was playing hardball with the group.

Cuomo "says he works with Republicans, but often times, it looks like he works for the Republicans," Nixon told Colbert, adding that she thought he was trying to "please his big money donors."

The interview wasn't filled with specifics — after all, no one goes on a late night TV program to get into the weeds on policy proposals — but it was designed to give credibility to her insurgent campaign. Nixon has been derided by the Cuomo camp for not being serious about her campaign. And each time that has happened, Nixon has brought up another issue.

It's clear that Cuomo is worried about Nixon. She's a strong challenger with name recognition — his 2014 challenger was the fairly unknown Zephyr Teachout — and someone who wants to debate him on the issues. So what if Nixon wasn't a child of politics, as the governor (a son of a former New York governor) was?

Or, as Nixon put it, "You can have more than one career in your life."