Men arrested at Philly Starbucks speak out: "This is something that has been going on for years"

"I understand that rules are rules, but what's right is right and what's wrong is wrong," Donte Robinson says 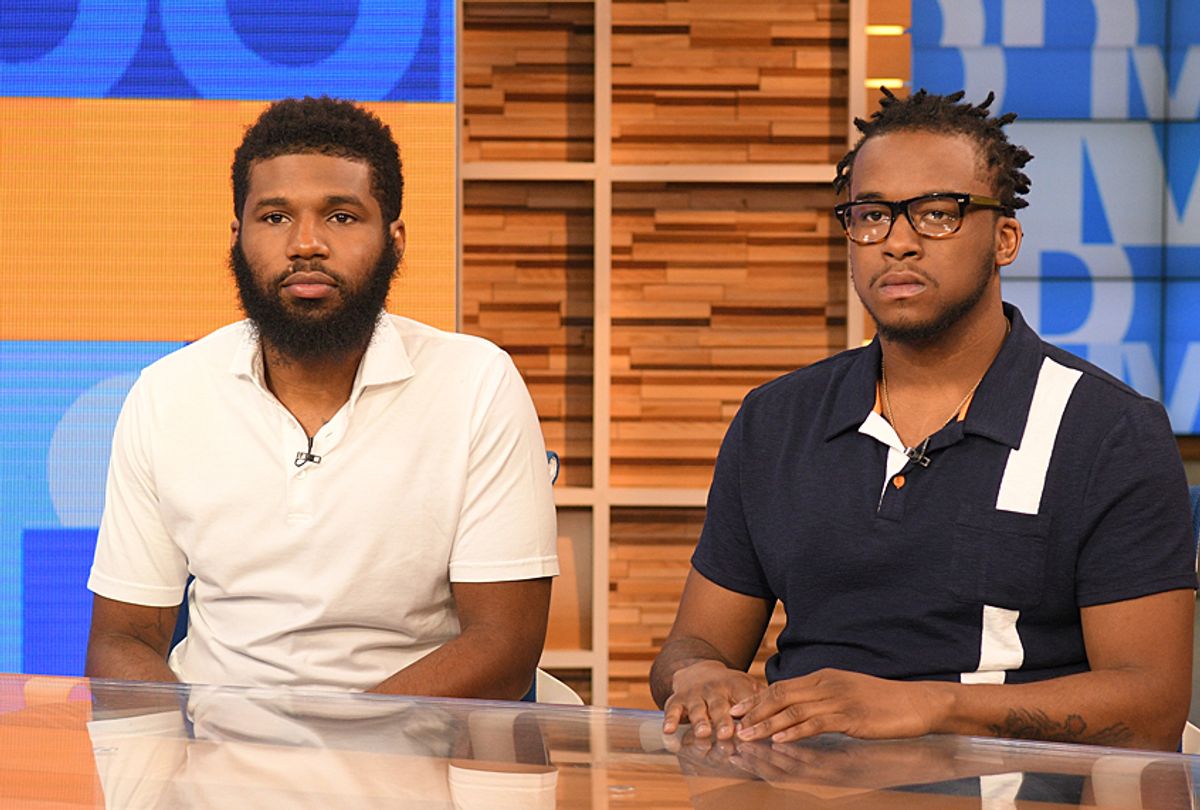 Two black men arrived at a Philadelphia Starbucks for a meeting at 4:35 p.m. local time last week. Two minutes later, at 4:37 p.m., authorities were called to the scene. The men were arrested, placed in handcuffs, escorted out of the store and thrown into the back of a SWAT car.

Donte Robinson and Rashon Nelson, the two men who were arrested, appeared on ABC's "Good Morning America" on Thursday to tell their story publicly for the first time. The 23-year-old entrepreneurs said they came to Starbucks for a business meeting they believed would change their lives.

Nelson said he asked to use the restroom shortly after walking in, and when he was told it was for paying customers only, he did not realize it was a question that could have triggered his arrest. He thought nothing of a Starbucks employee coming up to the table he sat at with his business partner, Robinson, to ask if the men needed help. The pair declined the offer and explained that they were awaiting a business meeting. Robinson and Nelson were waiting for the third person to arrive when a white store employee called 911.

"I was thinking, they can't be here for us," Robinson said of the authorities. "It didn't really hit me what was going on – that it was real – until I was being double-locked with my hands behind my back."

Nelson and Robinson were arrested for trespassing. No charges were filed, but video footage of the incident went viral and provoked protests and also calls for boycotts.

Nelson said they had been working toward their business meeting for months. "We're days away from changing our whole entire situation, our lives, and you about to sit here telling me I can't do that? You're not doing that."

"I understand that rules are rules, but what's right is right and what's wrong is wrong," Robinson added.

A lawyer for the men told "Good Morning America" that Starbucks has agreed to their proposal to enter mediation with a retired federal judge.

"I want to make sure this situation doesn't happen again," Robinson said. "I want for a young man – or young men – to not be traumatized by this and instead be motivated and inspired."

The store employee who called authorities is no longer working with the Starbucks. The company has not said under what circumstances she left.

Facing backlash about Nelson and Robinson's arrest, Starbucks announced it would close its 8,000 company-owned stores in the U.S. on May 29 to train workers about racial bias. In total, the training will be provided to about 175,000 employees.

Starbucks has not revealed details of the curriculum of its training program, but it will be developed with guidance from a team that includes former U.S. Attorney General Eric Holder; Sherrilyn Ifill, president and director-counsel of the NAACP Legal Defense and Education Fund; Bryan Stevenson, founder and executive director of the Equal Justice Initiative, a nonprofit based in Montgomery, Ala.; Heather McGhee, president of Demos, a public policy think tank based in New York; and Jonathan Greenblatt, CEO of the Anti-Defamation League, according to NBC News.

On Wednesday, Johnson and Starbucks founder Howard Schultz also met with Philadelphia church and community leaders. Rev. Gregory Holston, pastor of Janes Memorial United Methodist Church and executive director of Philadelphians Organized to Witness Empower and Rebuild (POWER), helped organize the meeting. He has protested the arrest of Nelson and Robinson and told CNNMoney he was "cautiously optimistic" about Starbucks' response.

A number of top companies, including Google and Coca-Cola, have conducted similar training for their employees in recent years.

Applebee's, for example, fired three employees and issued an apology over a Feb. 9 incident at a mall-based restaurant in Independence, Missouri, involving the racial profiling of two black customers who were falsely accused of not paying their bill.

In addition to the bias training, top Starbucks leaders, including the company's CEO, COO and board chair were pressed in the meeting on raising wages, hiring workers who have formerly been incarcerated and addressing the role that Starbucks has played in perpetuating gentrification, according to the Philadelphia Tribune.

"We are challenging them to take the lead in supporting racial justice organizations and speaking to other companies to join the cause," Holston told CNNMoney.

According to the outlet, Starbucks would not discuss the meeting but said through a spokesperson that "we are grateful to have these opportunities to talk with and listen to civic and community leaders this week in Philadelphia."

Despite the trauma, Robinson and Nelson are using this situation to highlight persisting racial inequality and bias across the country.

"I want to take this opportunity as a stepping stone, to really stand up and show your greatness," Nelson said. "And that you're not judged by the the color of your skin as our ancestors were – or anyone else. This is something that has been going on for years, and everyone is blind to it."

"Taking those actions and putting them in their place. And helping people understand that it's not a black people thing," he continued. "It's a people thing. That's what we want to see out of this – true change."